According to my Facebook profile, on Aug. 2 I read articles about Gabby Douglas's Olympic win, a pharmaceutical exec charged with insider trading and Congress' failure to pass cybersecurity legislation.

But truth be told I didn't really read any of these. I clicked on them, skimmed the first paragraph or two, then moved on.

Scoopinion, a Finnish startup that dubs itself a "personalized magazine," is trying to shift the focus away from clicks and toward cogitation with a tool that tracks how carefully readers read stories online. Using a browser app that launched publicly on Tuesday, Scoopinion monitors not just how much time readers spend on a certain site, a standard metric for measuring popularity online, but also the time spent on each line of text presented in an article. In other words, Scoopinion can see whether you made it all the way through that story about Syria, or skipped out halfway through to watch a video of a baby panda falling off a slide.

"The aim is to make the content matter instead of clicks, shares or tweets," Scoopinion CEO Kobra Koskinen told The Huffington Post in an email.

Scoopinion is using this data to compile a crowdsourced, customized "magazine" that features the most engaging online content, measured according to how thoroughly those stories have been read. Scoopinion's article recommendations take into account individual reading habits and which stories have been most successful in the Scoopinion reader community. Not surprisingly, the focus on time as a measure of article quality tends to favor long-form writing, says Koskinen.

In a writing world where quality is often quantified by clicks, tweets and shares, it's refreshing to find a startup trying to distinguish between work that grabs our attention, and work that keeps our attention. Ever clicked on a story that sounded intriguing, but left you totally disappointed, with a sneaking suspicion that the headline writer was smirking at you somewhere thinking, "sucker"? I know I have. And whether or not I immediately closed the page, they'd still been rewarded with my click, an implicit endorsement of whatever sneaky maneuver was used to get my hit.

Online, writers have very little room to make an impression. Whereas physical magazines and newspapers force readers to stumble across entire articles they might not otherwise have sought out, websites give writers just a few words with which to make an impression: a six-word headline, a 140 character tweet, or, if you're really lucky, a 50-word blurb. With a little luck, Scoopinion could shift attention beyond grabby headlines to the substance underneath.

That's not to say that Scoopinion's personalized magazine is listicle-free and chock-full of highbrow reading, nor should it be. The top articles Scoopinion recommended to me include, "10 of the most disturbing communities on the Web," "How MIT Students Won $8 Million in the Massachusetts Lottery," and "Ignore Your Oven Dial." Maybe the serious stuff just doesn't keep our attention the way slideshows do. I'd still rather read a great slideshow than a mediocre one with a great headline. According to Koskinen, Scoopinion's beta users spent "four times as much time reading stories they find at Scoopinion in comparison to stories found elsewhere."

Scoopinion could also use big data to transform how journalists write. Koskinen explains that his company's tool can draw an "attention curve" along an article that will show if readers "drop off" at a certain point and, if so, where.

Just as websites test how different layouts affect the likelihood a shopper clicks "buy," writers could perhaps eventually milk the big data teat to see where they lose their readers. Editors would no longer be the arbiter of a good lede or a great nut graf. Readers would. Was the third paragraph of this story a total snooze? With a more sophisticated version of Scoopinion's attention heat map, I'd know, and with my next article, I could try putting a quote up higher, or saving the "so what" for last. Maybe I could even test a few different nut grafs, showing different groups of readers different versions of the article, to see which kept people reading longer.

Whether that additional information would lead to better writing, or merely more "gotchas," remains to be seen. And do writers really want to know how frequently (or, more likely, infrequently) readers make it all the way through a piece? I'm willing to try it. Tweet me "pizza bagel" if you've seen this (I'm @bbosker).

Here's what Scoopinion's heat map looks like (though Koskinen notes this tool is not yet available to users). You can find the Scoopinion app here: 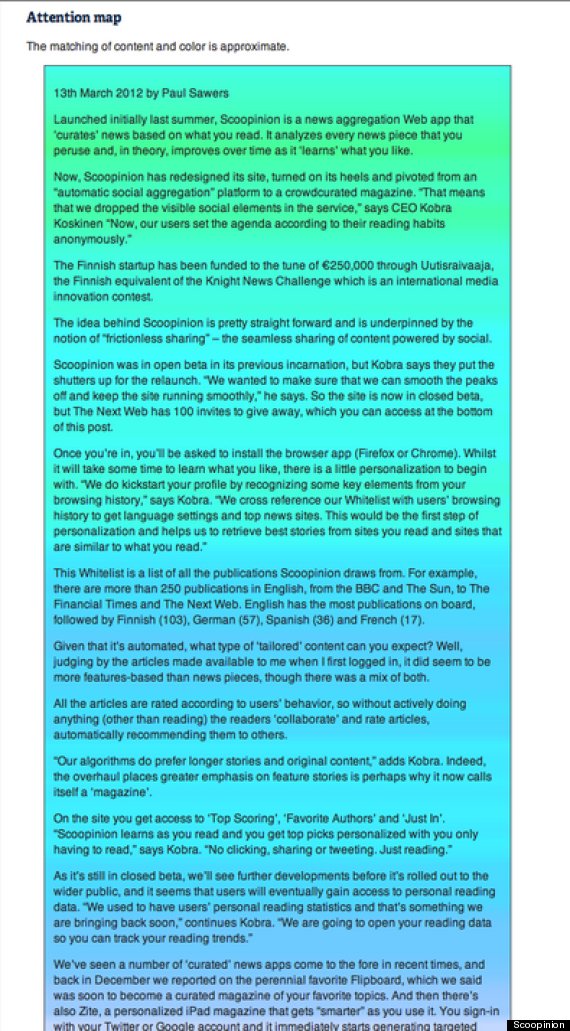 PHOTO GALLERY
Inside Scoopinion
Download
Calling all HuffPost superfans!
Sign up for membership to become a founding member and help shape HuffPost's next chapter
Join HuffPost

Scoopinion Tracks What You Read, Not What You Click (Yes, This Is A Test)
Inside Scoopinion 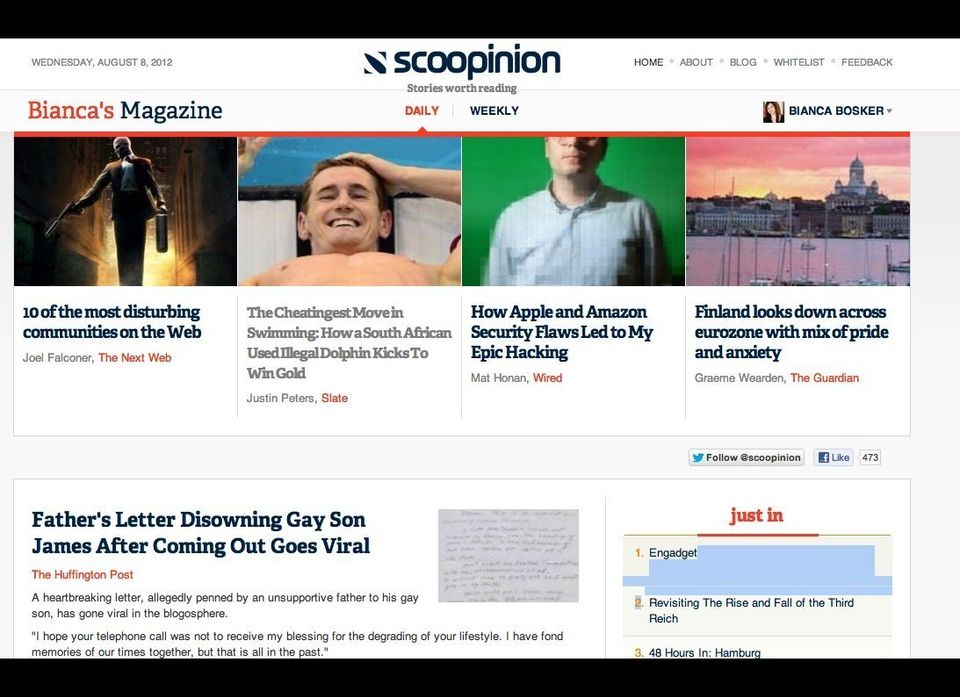