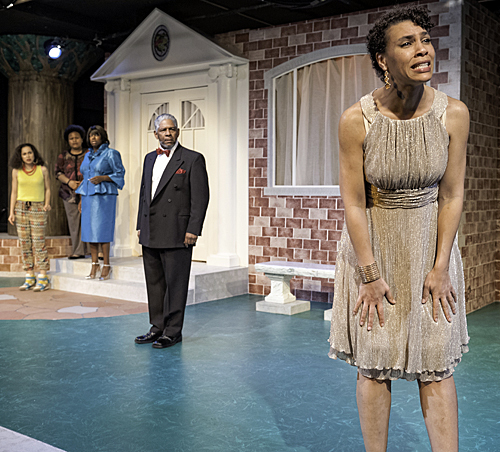 Photos by Lance Huntley
As the chorus watches, Medea (Leontyne Mbele-Mbong) pleads with Kreon (Dwight Dean Mahabir) to spare her from banishment.

To paraphrase William Congreve's most enduring and misquoted line: Hell has no fury like a lover scorned. You see its proof in the 21st century's sensationalized news, too terribly often. You find it recounted in antiquity, most memorably and barbarously in Euripides' Medea.

The play is more than 2,400 years old; its power is timeless, as all can see these days at San Francisco's African-American Shakespeare Company.

With a scorching Leontyne Mbele-Mbong in the title role and compelling direction by Dawn Monique Williams, this fresh Medea bridges the centuries in its visual style, language and impact.

Although archaic references to kings and gods and magical powers are inescapable, strong performances give the production the immediacy of contemporary drama and far more passion than most modern works ever achieve. The play runs a scant 90 minutes, but it's as intense a 90 theatrical minutes as we're ever likely to encounter.

Mbele-Mbong shifts with finesse among Medea's varied facades: at one instant totally distraught and tormented, at other times in full control of her emotions. She can be sly, manipulative, sensual, commanding, affectionate or furiously homicidal, yet each of those qualities is credible at the moment she displays it. 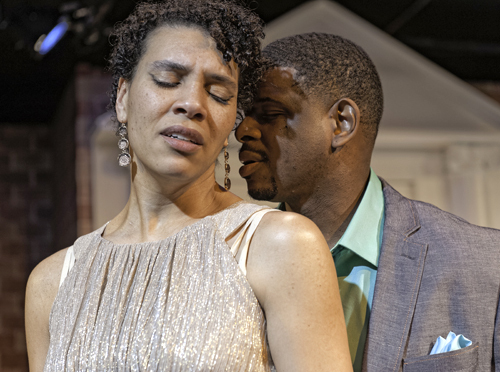 Jason (Khary Moye) tries to convince Medea (Leontyne Mbele-Mbong) that he's only thinking of her and their kids.

Medea's actions -- especially the climactic murder of her two young sons -- are monstrous, but Euripides set them in a context that made such horror comprehensible. She had already caused the death of two brothers, among others, for the sake of her husband, Jason. When he betrays her by marrying a Corinthian princess, she is justifiably outraged, primed for vengeance and skilled at employing violence.

Contemporary feminists have found cause for empathy in Medea's plight, and especially in her fury about the traditional subordination of women in patriarchal cultures. But empathy has limits in this case. She may rail about being powerless in a realm ruled by men, but then goes on to exert the immensity of her power. It's not a pretty sight.

Although Mbele-Mbong, a tall actress with a huge and flexible voice, is the production's most robust figure, her Medea dominates only by guile.

Facing the Corinthian king, Kreon, who has ordered her banishment out of fear of her vengeance, she pleads and wins a tiny gesture of mercy.

Facing the Athenian king, Aigeus, she radiates sympathy for his failure to sire a child, offers to employ mystical powers on his behalf and in return wins a promise of shelter in Athens.

Both monarchs are expertly portrayed by Dwight Dean Mahabir, erect and forceful as Kreon, stooped and humble as Aigeus.

She also receives fine support from Cathleen Riddley as the Nurse, who shifts between approval of Medea's gentler pronouncements and revulsion at her planned and executed cruelties. I was puzzled, though, when Riddley used her skills as a certified American Sign Language interpreter as backdrop for several speeches by Medea. The effect was only to distract. 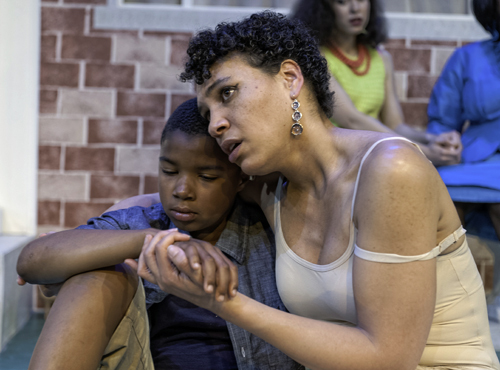 The production's weakest link lies in the failure of Khary Moye to convey a visceral relationship with Medea. Whether the couple's interplay is hostile or affectionate, he seems remote. His lines convey Jason's thoughts with clarity, but his body language communicates little.

Euripides' chorus is dispatched respectably by four women, one of whom -- Elizabeth Strong -- also plays several individual characters. Two preteen boys fill the non-speaking roles of Medea's sons, contributing a youthful presence but no suggestion that they relate to their mother or have any emotional engagement with the intense moods around them. A few more rehearsals should help.

The drama's language is crisp and unadorned, in a 1990s translation by Kenneth McLeish and Frederic Raphael. Bert van Aalsberg's set is modern yet Greek in flavor, with white columns and pediment framing the doors of an opulent brick residence. Courtney Flores designed the contemporary attire, including a glittering dress worn by Medea until she strips it off and offers it as a poisonous gift to Jason's new bride. What made it suddenly turn toxic? I don't have a clue.

Regardless of the small flaws and puzzles, this is a gripping Medea, well worth experiencing.

Medea runs through March 30 in the Buriel Clay Theater at the African American Art and Theater Complex, 762 Fulton St. (at Webster), San Francisco. Tickets are $12.50-$37-50.