Like many, I can get obsessive about film music. But long gone are Erich Wolfgang Korngold, Henry Mancini, even John Barry and the astounding Jerry Goldsmith. We just lost the often excellent James Horner. Meanwhile, John Williams is kinda busy with some little Disney project with lightsabers in it. And upstarts like Anne Dudley, Danny Elfman, Herbie Hancock and Hans Zimmer have become established elders. Thus do I scan the horizon for fresh talent. 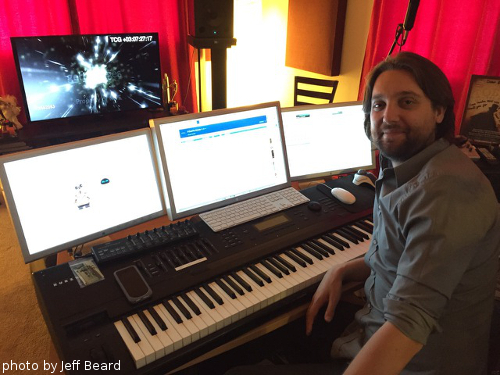 Currently my ear has landed upon Giona Ostinelli, a Swiss composer working in Hollywood, a mere 29 years old but with an impressive 25 feature films to his credit, plus assorted short films (over 30 during just nine months studying at USC!) and new-media projects. You can hear Giona's work this week in POD, a horror shocker by director Mickey Keating, opening in 10 cities and via VOD. While POD -- POD on VOD, that's catchy -- showcases Giona's gift for eerie tension-building, it wasn't until I visited his studio that the delightful diversity of the young composer's palette was revealed. He began by screening and playing his upbeat, aw-shucks, orchestral opening for Arnold Grossman's The Boat Builder (starring Christopher Lloyd) -- and I was like, wait, you're the same guy? You're not about just one screechy-spooky note?

"With POD, for the ending, I wrote this piece for a choir," explains Giona of his efficient 2 1/2-week process of scoring the horror, "and Mickey didn't know what was going to happen. I didn't know either, because I got to the end of the movie, and I was sick and tired of hearing my sounds, I wanted something different! So I said, 'how about a choir?' I sent it to Mickey, I said, 'Mickey, you're allowed to hate me for what I've done with the ending -- because it's totally different from the rest.' So I sent it to him, and he was like, 'that's an awesome surprise!' He didn't expect it, and it worked great."

Indeed, viewing POD -- which is not unlike a meaner, scarier, extended X-Files episode (two siblings check on their brother in a secluded Maine house: and what they find ain't pretty) -- one does not sit around thinking "choir" -- and right away, that's the aura of Giona: an innovator. He seems to have "surprise" coded into his DNA. I ask about scoring horror -- does the director impose certain obligatory stings and so forth?

"He always invites me to his place," says Giona of Mickey, "to his editing bay, and then he shows me the film. He's like, 'Here's my idea, roughly, how it is -- just take it, and surprise me!' So I was working on it, and he has these flashbacks, and I was like, 'Why don't we try to do something cool?' I know that sound design is going to cover that, to a certain extent -- but when I watch a film, and I see that type of thing, I would like it to be pressing! (Giona makes a disturbing mouth noise) So I was like, why not take the chance and do it?" 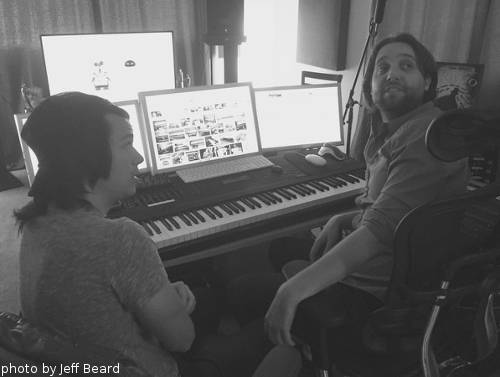 This attitude serves Giona well -- he takes the chance and does it -- and he and I enthuse over our love of Dave Grusin's winning score for The Goonies: which, it turns out, inspired us both to rush headlong toward the arts. Heh.

"I remember, when I was a kid, saying, 'I want to do this!'" gushes Giona. "I started playing drums when I was five, piano when I was almost nine, doing choir when I was 16, playing in many bands -- metal bands, rock bands, blues bands, jazz trio -- you can see in the types of films I do, I always do different genres. (laughs) I always wanted to do film music, but growing up in Switzerland, it's not a career choice. In Switzerland you either become a banker, a lawyer, or a doctor."

Or Jung, I add (though that job application proves fairly stringent).

"Or a watchmaker!" adds Giona's concert-pianist partner -- and we all grin knowingly: watches -- how 20th-century! 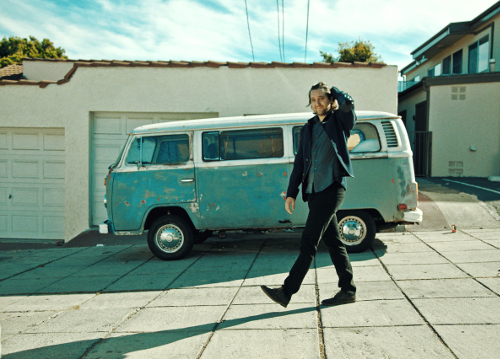 I elicit a laugh from Giona by imitating the beloved Danny Elfman style (conveniently: "Oompa-Loompa, Oompa-Loompa..."), and he admits he's a big soundtrack buff, raving up Thomas Newman: "His sounds are so amazing," he says, emphasizing Saving Mr. Banks, "but for some reason, I love tons of his scores, but that one! Thomas Newman, you listen to him, it's very simple, and it sounds great. Then you go to Hans Zimmer, he has 200 tracks, it sounds great -- a completely different style."

Giona is practically gasping as he enthuses: "I like listening to scores, and I buy so many! How did they get this sound?!"

On cue, Mickey shows up to join his composer (see videos for the guys in action), and the two rave up their partnership on POD but also Ritual (2013) and the forthcoming Darling (2015). "We've known each other for so long," says the world-weary 25-year-old, "that the whole process is really creative. I feel like so much of the process of working with composers and editors, there's this learning curve. But me and Giona can just riff back and forth."

"And also, the cool thing about Mickey," adds Giona, "not many people do this, but working with Mickey is like family. It's always the same editor, same sound designer, same cinematographer, and we all know each other. It's so cool! You feel part of a family, and you're not afraid to experiment."

"Yeah, it's great," agrees Mickey. "And I mean, it really helps create a process. It doesn't seem so formal. The movies are all sort of hand-made and home-grown, and that's what's exciting about them."

"I'm finishing Darling, and Mickey's finishing editing Carnage Park," chimes in Giona, contrasting both the visuals and sounds of the former (lensed in New York), and the latter (lensed in the California desert).

"What's great about it is they're such different films," adds Mickey. "Darling's so weird, but classical and ambient, and Carnage Park's like a Peckinpah western with the sensibilities of Texas Chainsaw Massacre and stuff. So they're all different subgenres of horror, and it's so cool to be able to have somebody who can just do it all!" Mickey gestures to his friend, Giona. 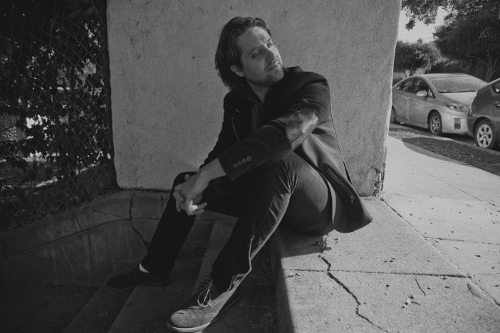 "I'm sure that if I wouldn't try to push myself," sums up Giona, "to do drama, to do comedies, dark comedies, trying to do a romantic film or Christmas film--"

"Two Christmas films," I remind him.

"--two Christmas films. If I wouldn't try to push myself, and go to places that I'm afraid of, that I'm not comfortable in, then I wouldn't be so good even in the horror genre. But because I always try to explore as much as possible, then everything becomes useful."

POD is now playing in select theaters, and on VOD.