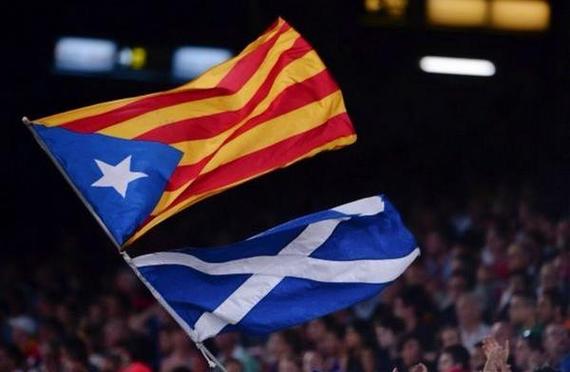 Scotland and Catalonia are brothers in arms. Independence movement leaders communicate regularly.  On September 18, when Scotland voted on uncoupling from the United Kingdom Catalans were there.  When Catalonia votes on independence, a vote originally scheduled for November 9th but delayed pending a court decision, Scots will certainly be in attendance.

But in key ways the two are quite different. All of Scotland was never militarily conquered by England.   It voluntarily entered into what became the United Kingdom and retained many of its institutions, although not its Parliament. Catalonia, on the other hand, fell to the Bourbon King Felipe V after a brutal two-year siege of Barcelona.  In the aftermath Catalan institutions were wiped out and the use of the Catalan language severely constrained.  In the 1930s Catalonia was the center of resistance to Franco and fascism and when Franco, with the aid of Germany, won he deepened its cultural annihilation to the point where even reading in Catalan made one subject to arrest.

In Catalonia language is an essential point of dispute.  In Scotland it is not.  While both countries revived education in their ancient languages in the 1980s, Catalonia was much more aggressive.  Catalan is Catalonia's official language.  Schools teach Spanish only as a foreign language.  Today less than 2 percent of Scotland speaks Gaelic while more than 45 percent of Catalonia speak Catalan.

One of the major factors spurring Scots to vote for independence is their opposition to what many Scots view as the mean spirited policies embraced by Whitehall.  When Scotland has the authority to make decisions, theirs are quite different than the Tories. Unlike in the rest of the United Kingdom, the costs of a university education, and care services for the elderly are free in Scotland. There are many other policy differences. Scots are much more favorable to continued membership in the European Union. Scotland wants to eliminate nuclear weapons.  In contrast, policy differences, except with regard to language and fiscal flows, do not appear to be a major factor in the drive for Catalonia's independence.

If Scotland were to go independent, it would almost certainly endure fiscal hardship.  Catalonia, on the other hand, would handsomely benefit.

Scotland accounts for 8.4 percent of the UK population and 8.3 percent of the UK's total output.  Under the current spending formula Scotland receives about £31000 ($5000) more per capita than England.  By one calculation even if Scotland were to receive 90 percent of the North Sea oil revenue, something the UK would never allow, the subsidy would simply drop to £2100 ($3400).

Most of the people voting for Scottish independence seemed to understand this.  Economic betterment wasn't a persuasive factor for the Yes voter.  Only 20 percent were guided by the belief that "on balance, Scotland's future looked brighter as an independent country."  Some 70 percent embraced "the principle that all decisions about Scotland should be taken in Scotland."

Catalonia has 16 percent of the Spanish population while comprising 20 percent of Spain's economy. Although most wealthier regions of Spain and other European countries run fiscal deficits (they generate more tax revenue than they receive back) Catalonia's deficit is comparatively much greater. For example, southeast England is 17 percent wealthier than other English regions and has a fiscal deficit of a little over 6 percent.  Paris is 51 percent richer than other parts of France and runs a fiscal deceit of a little over 4 percent.  Catalonia is 22 percent richer than the average Spanish region but runs a fiscal deficit of 7-10 percent.  By one estimate Catalonian annual subsidies to the rest of Spain may be as much as £2600 ($4200) per capita.  Catalonia argues that the fiscal deficit is one of the reasons that its economic growth in recent years has been slower than other regions.

The Debate Over Devolution

"Catalan is like Scotland but Spain is not like Greater Britain," observes Josep-Louis Carod-Rovira, Vice President of the Government of Catalonia. He was referring to the fact that Britain had allowed an up or down binding vote for independence while Madrid insists that even a nonbinding vote is illegal. But his comment speaks to larger differences.

The UK is one of the most centralized democratic political systems in the world, About 80 percent of spending is done through Whitehall.  The advent of the Scottish Parliament in 1999 led to the devolution of authority over certain regional policies but Whitehall still firmly holds the purse strings. Spain used to have a similar centralized tax regime but since Franco's death in 1975 and the introduction of a new Constitution that gave significant autonomy to regions a little more than 40 percent of tax revenues are under regional or local control.

Scotland voted against independence but its vote has generated an historic debate within the United Kingdom about federalism and devolution. Throughout 2013 the Yes vote consistently trailed by 20 points.  But the gap narrowed in the month before the vote and in the last week a YouGov poll showed the Yes vote ahead.  The political establishment panicked. Rival party leaders Nick Clegg, Ed Miliband and David Cameron united to ward off defeat by offering substantial devolution.

After the vote Prime Minister David Cameron promised, "I will ensure that those commitments are honored in full."  A devolution bill is supposed to be ready by January and could be a significant issue in next year's general election.

After the election Cameron tweeted, "We have heard the voice of Scotland and now the millions of voices of England must also be heard."   Some Conservatives might be delighted by the turn of events.  The vast majority of Scotland's 41 Members of Parliament would be supportive of a governing coalition with Labor. But if they were not allowed to vote on decisions affecting England, the Conservatives would have free rein to in essence govern 75 percent of the population of the UK.

And it may be even more complicated because within England there is a vigorous demand for devolution, especially from the major cities in the north.  Peter Coy, economics editor of Bloomberg BusinessWeek maintains, "It's not England from which many Scots want to detach themselves.  It's London, the oversized hub controlling the revenue of an undersized empire."  In January the real estate firm Savills estimated that property in London's 10 richest boroughs (it has 31) is "worth 9 percent more than Scotland, Wales and North Ireland combined."  Even the UK Secretary of State for Business, Innovation and Skills Vince Cable has observed that London "is becoming a giant suction machine draining the life out of the rest of the country"

In a letter to First Secretary of State William Hague, who is charged with coming up with a devolution plan, the cities declared,  "A No for independence is a Yes for devolution, not just in Scotland but across the United Kingdom...Devolution cannot just be to national parliaments, replacing a centralized Government in Westminster with one in Scotland, Wales or indeed England."

The debate in Spain takes place in a different context.  After Franco died in 1975 a new Constitution devolved significant authority to historically autonomous regions like Catalonia.  In 1979 a revised Statute of Autonomy approved by both the Spanish parliament and the Catalan government and 73 percent of the voters delegated significantly more authority. (New statutes of autonomy were also negotiated other regions such as Valencia, Balearic Islands, Andalusia, Aragon, Castile and Leon.)  By Court decisions have overturned and restricted significant aspects of that Statute, infuriating Catalonians.

In Great Britain there appeared little hostility toward the Scots in their campaign for independence. This is not the case in Spain.  The People's Party (PP), which was in power in the early 2000s upended the Socialist Party to gain a clear majority in 2011.  The PP has embraced an increasingly patriotic and nationalist bent, appealing to the sense of "Spanishness" and making strong use of national symbols such as the Spanish flag.

After the revised Statute of Autonomy was approved in 2006 the PP launched a legal challenge. The court case dragged on for four years during which time the PP organized an anti Catalonia campaign across Spain.  The campaign polarized public opinion inside and outside Catalonia.  In June 2006, when the revised Statute of Autonomy was approved public opinion polls showed that most Catalans wanted to remain an autonomous community within Spain. Only 15 percent desired full independence.  By January 2013 secession had gained the support of 46 percent.

Madrid is openly hostile to Catalonia's demands.  Whitehall does not view Scotland as the enemy.

Both Scotland and Catalonia desire more authority but their motivations may be different.  In 1999 a Scottish Parliament held session for the first time since 1707.  With the approval of all parties, the egalitarian song A Man's a Man for A' That by Robert Burns was performed at the opening ceremony.

At 5:14 PM on September 11, 2014 (1714 using a 24 hour clock) on Catalonia's National Day, between 550,000 and 1.8 million people formed an enormous "V" in the red and yellow colors of the Catalan flag on the streets of Barcelona. The "V" stands for via, the path toward independence and the Catalans insistence on their right to hold a referendum on that issue.  At 8:00 a.m.--the exact hour when Barcelona's Chief Minister Rafael Casanova was wounded and the city fell--300 cellists played in concert, performing a specially commission tribute by composer Albert Guinovart to those who died in the Siege.  The song is entitled "We were. We are. We will be."