The young man walks by himself, fast but not fast enough, far but not far enough (faces slide out of sight, talk trails into tattered scraps, footsteps tap fainter in alleys); he must catch the last subway, the streetcar, the bus, run up the gangplanks of all the steamboats, register at all the hotels, work in the cities, answer the want-ads, learn the trades, take up the jobs, live in all the boarding-houses, sleep in all the beds. One bed is not enough, one job is not enough, one life is not enough. At night, head swimming with wants, he walks by himself alone. -- John Dos Passos, The 42nd Parallel 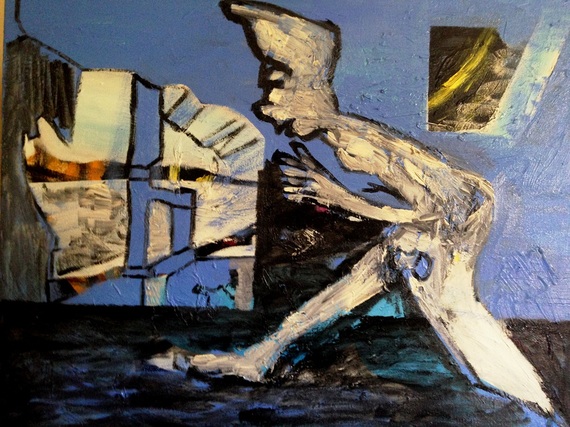 "I favor broad swaths over details not because I dislike specificity, but because I don't want to slow down. I can't stop moving. That's it." -- Scott A. Trimble

John Dos Passos wrote his lines in a 1919 novel to describe a character's state of mind, the urgency of his inner life. But the author's evocative imagery and rushing language could just as easily be describing the look, feel and even outright content of Scott A. Trimble's paintings from just the last few years. In his process-oriented palimpsestic landscapes and portraits, Trimble works at a prolific headlong pace, alone, in a race to execute ideas to his satisfaction before the next ones appear, fully formed, to disrupt the steady silent slap of paint hitting canvas. And when that paint does hit the canvas, it is almost always in negotiated overpainting and excavation with the pre-existing one he is working on top of. Grounds go on last and wrap their embrace around figures who would be constructed as negative space but whose bodies are instead windows to the mottled, patterned, prismatic details of what came before. In a very real, literal, formal sense, each of his paintings -- in which faces do slide, scraps do tatter and footsteps do patter -- live more than one life. 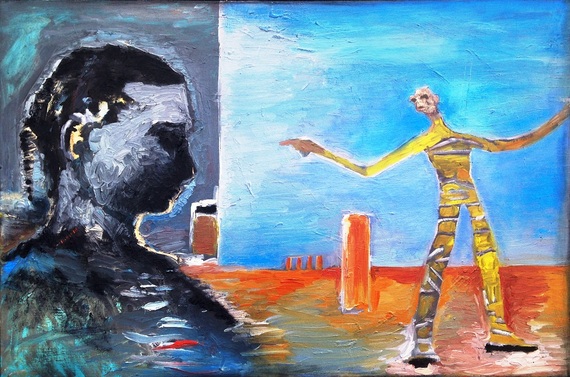 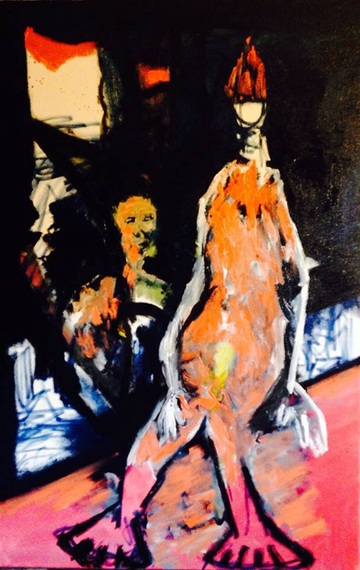 Scott A. Trimble: Here, finally then was a prayer that made them smile (2014)

In the great tradition of painters like Frank Auerbach, Leon Kossoff, RB Kitaj and early Richard Diebenkorn, Trimble is not afraid to make a mess of things. His images are characterized by skewed and forced perspective, breathless flatness, manipulated color schemes in detailed densities and gestural fields, suggestions of architecture, cinematically vast and surreal landscapes, cloying rich shadows and encroaching darkness, mannerist portraiture and a lexicon of abstract shapes and symbols that carry an atavistic, ancestral energy and a forceful sense of meaning despite their puckish ambivalence. "I shamelessly love ambiguity," Trimble happily admits. "I would rather be presented with an ill-defined symbol that may well hold a different meaning for me than it would for someone else, than to be told what to think -- or to be telling others what to think." 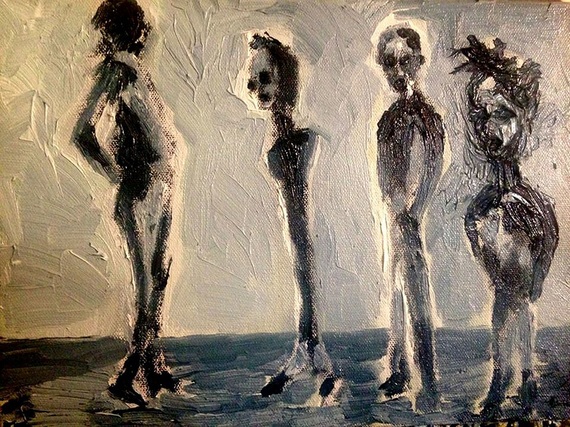 Scott A. Trimble: In her pocket a tattered photo of the four scholars casually discussing something irritatingly incomprehensible (2014) 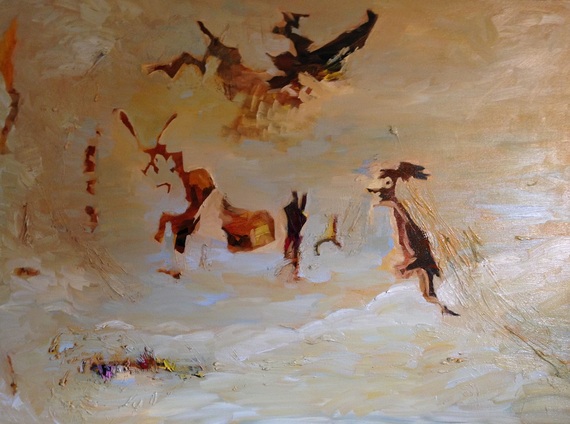 That said, his titles are deliberate and absolutely reflect his own background as a writer as well as specific literary influences that can well be said to have shaped his style even to a greater degree than the work of other painters. And in any case, even while his titles form simultaneously with the images -- it is those micro-poems, or what Trimble calls "pocket narratives" that he sets about visualizing and illustrating each time he re-encounters the easel. Dear hand, my heart tells me we'll ford the Midnight River by daybreak. | Alone time burning the edge of happy. | So he listened until he heard. | Just live your life in big swaths -- time crumbles in the run. | Tremor of the mind, tenor of the hand. | Youth is a hungry cartoon. | In her pocket a tattered photo of the four scholars casually discussing something irritatingly incomprehensible. | Here, finally then, was a prayer that made them smile... and so on. 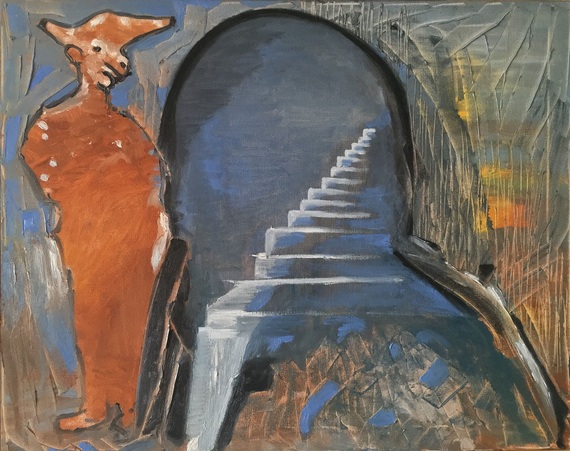 Scott A. Trimble: We always relished the nod of the greetsman (2015)

The value of ambiguous symbolism should be a contradiction but like dream logic it makes sense when you're looking at a Scott Trimble painting. That's because, while he is engrossed with concerns that are innate in his character and consciousness -- the environment, freedom, human nature and its flaws, the ultimate goodness of life -- what he is really interested in is the texture of relationships, naturally-occurring or socially constructed, like self-image or peer valuation or the impact of environmental pressures. He is, as he says, "more intrigued by the wire connecting two dots than by the dots themselves," and for this reason and others, the emotional authenticity of his work displaces the impulse for realism, or even for harmony. Put another way, the kind of realism he is after is not the kind we see with our eyes -- but rather the kind we experience with our souls. 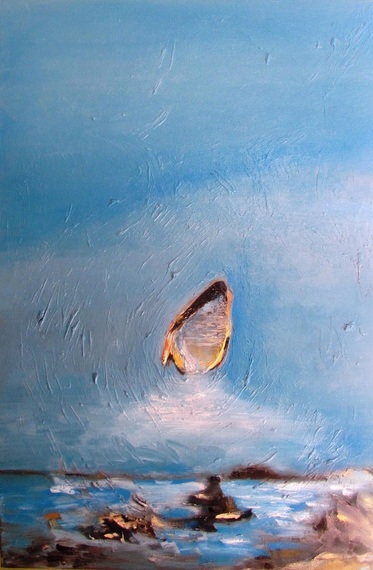 Scott A. Trimble: Of course the rain-catcher associated the color blue with happiness (2015) 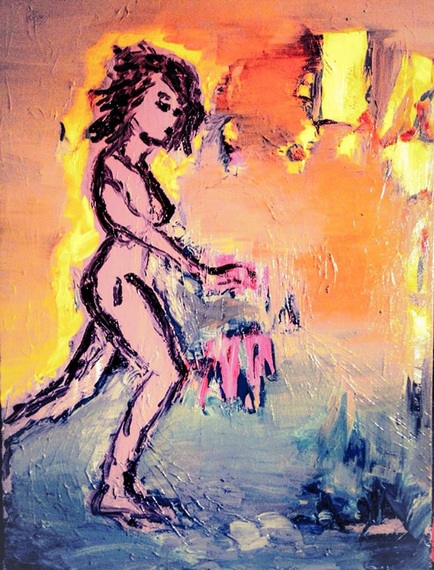 Scott A. Trimble: Just live your life in big swaths, time crumbles in the run (2014)