Lost. How could Captain Scott's photographs ever have been forgotten and lost? It seems somewhat careless, to say the least. They form an invaluable record from one of the greatest epic tales in the history of human exploration.

Yet, for all the biographies and newspaper articles about Captain Scott over the past hundred years, these important images became neglected, gathering layers of dust in the basement of a major photographic agency, until they were quietly sold off in a New York auction room in 2001. They re-emerged in London some years later, during a conversation over a glass of gin and tonic: 109 small silver-gelatin contact prints, 4 inches by 3.25 inches (10 cm x 8 cm) in size and stored in a standard black plastic photograph folder, three to a page.

The folder is not the original housing for the photographs but a sign of the cursory manner in which they were marketed. Other signs of casual treatment are also evident. Each photograph had once been carefully developed, ordered and labelled, being given its own unique S-number: 'S' for 'Scott'. They formed part of one of the greatest photographic catalogues ever compiled, the Ponting-Debenham index. All this is gone. The S-numbers now used are self-evidently not the original numbers, their identifications are absent and their ordering almost unaccountably misguided.

For all their disorder, at least the prints have survived in good physical condition; their negatives have simply disappeared. The most likely fate of the original negatives may be guessed from notes on the backs of the photographs: 'neg. missing, May '67'.

This implies that, like so many other nitrocellulose film products from the period, their perpetual survival was taken for granted while they quietly disintegrated, or, perhaps worse, spontaneously combusted. The chemical instability of early film in poor storage conditions is notorious. It is a miracle, then, that these photographs have survived at all.

Lost and forgotten. Perhaps it is not surprising. Captain Scott lost the race to the South Pole to Roald Amundsen and then died on the way back. Careless, that, or so the story goes, as for a hundred years numberless authors have thrown up a veritable fog of overexcited theories as to why.

Somewhere in the muddle of it all, the truth was obscured. Since Scott's reputation has been treated somewhat perfunctorily over the years, why not his photographs? Or perhaps, if Scott's blue jackets were right, something more sinister has been at work. "The sailors began to debate who was the Jonah. They said he was the cameras."

A Jonah. In that eerie thought psychological worlds collide, archetypes challenge rational enterprise, the brooding power of the subconscious threatens chaos out of order: "Cast the cameras away!' 'The evil eye brings the curse!"

Barely vocalized, yet brooding in the sailors' minds. What fate awaits cursed photographs and a pole venture stalked by bad luck? It is rumored that sailors had killed Jonahs for less, even officers.

Yet Scott's was always intended as a scientific and rational endeavor and the cameras an important part of it. Throughout his career Scott was employed within the progressive vanguard of the Royal Navy; indeed, it is hard to truly grasp Scott's character without understanding that he was a successful naval officer with all that this entails. He served as a torpedo lieutenant when torpedoes were still a pioneering military development; also in naval intelligence, and he thrived through the modernization of the navy during the Fisher reforms, which replaced hereditary privilege with meritocracy.

He had a promising career ahead of him, being the most junior officer in command of an independent battleship, HMS Bulwark, shortly before he took leave, in 1909, to lead his second and final Antarctic expedition. For this, he pioneered the development of tracked motor sledges from which were derived the tanks of the First World War and many contemporary forms of polar transport. The demand of the blue jackets to cast the cameras away, if it had been seriously vocalized, would have been a charming old superstition, an alien enigma to Scott as much as to us - and laughed off.

So much for Jonahs. Besides, carelessness with important images of exploration has contemporary equivalents. In the United States, NASA recently had to admit that it had lost invaluable primary image data of the first landing of men on the Moon - and in just forty years. That too seems somewhat careless ... and not a mention of a Jonah anywhere.

Yet - and yet - the invocation of the ancient ways of the sea are enough to raise hairs on the backs of necks, and we cannot help but wonder...

See some of the photographs below.

PHOTO GALLERY
The Lost Photographs Of Captain Scott
Download
Calling all HuffPost superfans!
Sign up for membership to become a founding member and help shape HuffPost's next chapter
Join HuffPost 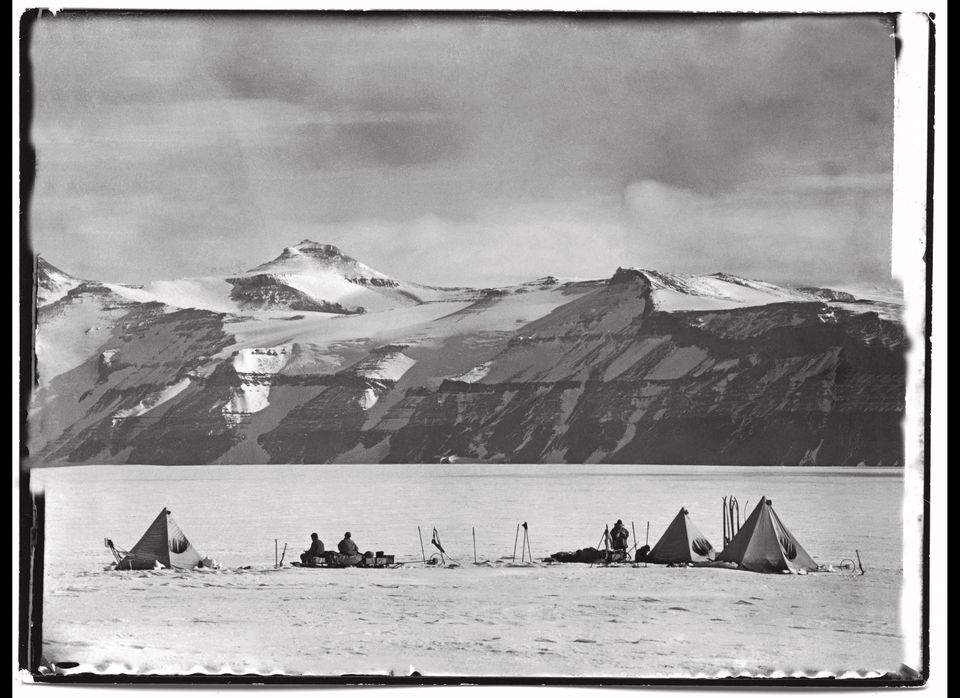