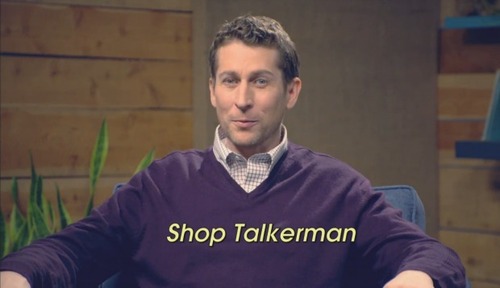 In music, some places are great incubators: The Factory, STAX Records, Sub Pop. In comedy it is no different. In the late 1990s, Bob Odenkirk and David Cross created one of the most influential sketch comedy shows of all time, Mr. Show. They had lots of help bringing it to fruition, too. The list of writers is one that would be enviable to any showrunner in the business. One of those writers was Scott Aukerman, who wrote some of the most memorable sketches on the show. Scott has since gone on to co-create Earwolf Media with business partner Jeff Ullrich, and create the Comedy Bang Bang TV show for IFC. I spoke to Scott about his Mr. Show and Run, Ronnie Run (the Mr. Show movie) days.

Karen Geier: You got your start on the writing staff of Mr. Show. There have been many stories told about how the writer's room was there, but now that the show is closing in on 20 years, care to share any indelible memories?
Scott Aukerman: it was the first real show business job I ever had. BJ Porter and I wrote a packet as a team. In the packet, I had written the "T'aint" sketch, he had written the "Intervention" sketch, and the "Blind Girl" sketch, which he and I used to do on stage together, and a few other sketches. I remember the only thing Bob [Odenkirk] has written on one of the other sketches was "Wow, crazy, man!" which was his code for "this is nuts, and we're not doing it." It was five sketches, and they wanted to use those 3 that they ended up using. I was super nervous about it.

I remember talking to Andy Kindler about it on the phone before I went in there, saying "I'm really nervous. I don't think I'm going to be good in the room." I'm not the type of guy who's funny in the room. I'm the guy who's funny late at night on a computer, trying to construct jokes.

I remember taking to it immediately, and actually being pretty good at it. There was one thing, though. I thought it was going to be a lot like Saturday Night Live, where you got there in the day, and from what I had heard and read about Saturday Night Live, when you get there, you just hang out there all day and night, and you just kind of write into the night.

My first week there, Brian [Posehn] and I shared an office together, and in the middle of the day, we were missing a clock, so we thought we would go to the comic book store to get a superhero clock or something. Brian wanted to pick up new comics, and we took off for about an hour in the middle of the day. I didn't think anything of it because I thought "you can come and go, because you stay all night." At about 7:45, I was still writing a sketch, and I was just planning on being there all night, and Bob came in, and said, "Hey, man, I noticed you and Brian took off in the middle of the day. What's going on?" So I said, "Yeah, we went to the comic book store, we were looking for a new clock." And he replied, "You're still here, so that's cool, but we don't really take off in the middle of the day. We pretty much come in in the morning and leave when we all leave." That's when I learned they kept more regular hours. But, it was weird on Mr. Show. We didn't start until 11:30 a.m., which is just insane when you think about it. Even then, Brian Posehn would get there really late. We would go from 11:30-5 some days, which is not enough, really. Working on Comedy Bang Bang, we're there from 10-7, and that's a pretty light day compared to most other TV shows. Other shows, it's like 10-10.

I look back on our productivity in the Mr. Show days, and think, "We probably could have worked harder." On my show, the writers work so hard, and they churn out so much material.

KG: You said on the DVD commentary to Mr. Show that one of the most time-consuming things to do was to write the links between sketches.
SA: Yeah, the links were really hard because you had to take these two totally disparate things and figure out how the end of one sketch (and some of the sketches didn't even have endings) would go into some totally different thing, and it would be just throwing out strange ideas, and you never wanted it to end up on that the previous sketch was on TV, and you pull out and in the next sketch, someone's watching a TV screen. That was considered lazy.

I remember there was one sketch, and it was going into the drug deal sketch, where everyone's wearing a wire, I remember we went back and forth on that one for three days trying to think of one. Finally, we agreed that we just couldn't think of anything. Let's just have it pull out of a TV. And we were really upset about it. And no one cares when they watch it. [laughs]

The first episode I worked on was the "God and the Bible" episode. I just think it's really lazy. I think we could have worked way harder on those links. After I had finished the season, I looked back at that episode and think "Oh, boy. that was no good."

KG: Continuing on that thread, how was the experience writing Run Ronnie Run? What was it like to shoot?
SA: At the end of Season Four of Mr. Show, instead of doing another season, everyone just thought they wanted to go and do a movie. Kind of like Monty Python. Monty Python went right into "And Now For Something Completely Different," and everyone kind of compared Mr. Show to Monty Python. I think for every sketch show, that's kind of the dream: Get popular enough to do a movie. I don't know why doing a movie is so important to people, but it's kind of this brass ring that everyone chases.

New Line was really interested in us doing a movie, and knew that it wanted it to be about Ronnie Dobbs, a popular recurring character on the show, who is in the opening scene of the entire series.

We thought it was just going to be really fun. That's how it was pitched to us by Bob and David. They basically asked all of the writers from Season Four, "Who wants to stick around and write a movie?" It was supposed to be nine weeks, super fast, super fun, just like we had been doing the show. Some of the other writers declined, because they had other stuff to do. The five of us: Brian, BJ, myself, Bob and David really wanted to do it.

What was supposed to be nine weeks turned out to be a year, or possibly a year and a half. The first few days, we wrote it really silly and really fun, and I remember we got so much material written in those first few days.

The plot of it I remember was Ronnie Dobbs goes to England and has sex with the Queen, and he battles the Loch Ness Monster. It was really funny. We wrote it just like Mr. Show. The only thing that survived from that was the prelude where the anthropomorphic sodas go and pee in the restroom. That was the silliest thing that survived.

What happened was that we got it in our heads that New Line wouldn't make the movie unless it had an actual character arc. The example that was used was Happy Gilmore. He wants to save his grandma and get her out of this home. We got into this whole morass of trying to write a movie that had an actual character arc and wasn't silly and made sense. And we found that all of these sketches we had written, these diversions, these tributaries the plot would go on, didn't work anymore.

It just became this hard puzzle that we couldn't figure out. BJ and I had only done one movie up until that point, but it was really super silly. We were very inexperienced at writing movies at that point.

It might very well have been the case that New Line wouldn't have made the movie if we hadn't changed it. I wish that we had at least written one draft of the movie we all wanted to make.

We couldn't afford very many takes, so we couldn't keep it loose and improv much at all. It wasn't very fun anymore by the time we went and shot it, and I think you can feel that in the over mannered way in which it was directed. It was a waste of four years that we could have spent making TV shows that would have been way more fun.

In part two of this interview, Scott discusses booking Pee-Wee Herman as a podcast guest and gets to the bottom of the lack of diversity on TV. Part two follows on Wednesday.