Scott Blake makes incredible interactive portraits out of bar codes, illustrating how black-and-white data can come to resemble a personal connection. The Omaha-based artist creates convincing human expression out of symbols of commodity, depicting the strange relationship between who we are and what we consume.

Blake has captured recognizable faces from Jane Fonda to Jesus Christ. For each portrait he collects bar code numbers that correspond to his subject. (For example, Fonda's barcodes are from her workout DVDs, and Marilyn Monroe's are from her films.) He then arranges his bar codes to specifically suit his subject; Monroe's codes curl like wavy hair while Ozzy Osbourne's shoot from his mouth. Many of Blake's portraits are interactive when scanned; in Andy Warhol's portrait, which is made up of bar codes from his famed Campbell Soup works, a video projector dumps virtual soup into a bowl.

Through this attention to detail Blake feigns a personal relationship with his subjects, which ultimately draws attention to the superficial and commercial nature of the relationship between icon and consumer. Although we feel like we know so many of the individuals Blake depicts, all we know of them is what they sell us. We asked Blake some questions about the process and motivation behind the project. Scroll down to see a slideshow of his work. 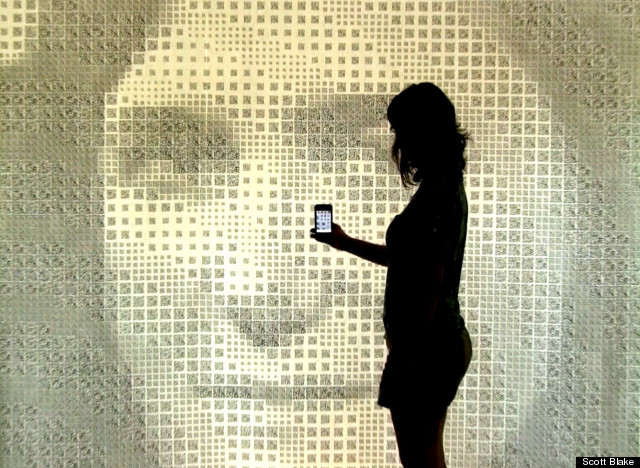 HP: When did you start this project and why have you continued with it?

SB: I started in '98 and it was inspired by the Y2K computer bug; I was living in San Francisco and it was the end of the world because of 0s and 1s. I was experimenting with Photoshop with creating my own halftone patterns. I really like Roy Lichtenstein's bending dot paintings, he would do this polka dot shading techniques -- I was trying to recreate that and I stumbled across a halftone pattern that was a bunch of lines that looked like a bar code. In 2007 when the iPhone came out with the bar code scanner it completely reinvented my work. I went around my studio with my iPhone and scanned all of the works I had made five years before. Hearing the scanner beep sort of verifies what I do.

HP: You have never created a portrait of someone you've seen in person. Why is that?

SB: I typically like to focus on the fact that I know these people only through their data. I have never met Oprah Winfrey but I've seen her in television, and that goes for a lot of people. They haven't met her in person but they are familiar with her product. All I really know are the products, the DVDs, the data that is encoded in each movie. You're just learning about a person's data stream, it's all 0s and 1s but we kind of think that it's a lot more than it is.

HP: You've mentioned that consumerism and celebrity are linked. How does art fit in with this relationship?

I am sort of interested in art as a commodity. Especially making art on the computer which to this day is considered a lesser medium. People used to joke about making art on Photoshop: "All you do is select a filter and it's done." I sort of take offense to that. I think you can be creative on a computer. My bar code work is commenting on digital art as a commodity. It is sort of poking fun at the fact that I'm trying to sell bar codes, which are these icons for buying and selling. And I'm sort of turning that on its head. Digital art isn't one of a kind, it isn't unique... there is no original. I can make infinite copies. So in a way I am addressing this new digital way of making and consuming art.

HP: Do you ever get bored of bar codes?

SB: Sometimes I get bored, but I find a new way to interact with them. I thought I might have stopped at this point but now we have QR codes, which are two dimensional bar codes. I just did a portrait that is completely interactive with smart phones. So I am embracing this new technology. I think every medium has constraints. If you are working with a paintbrush on canvas you can only do what a paintbrush on canvas allows. To me I see infinite possibilities when it comes to Photoshop. I even enjoy making art on Excel or on Google docs.

Check out Blake's bar code creations below and let us know which famous face would you like to see coded in the comments section. 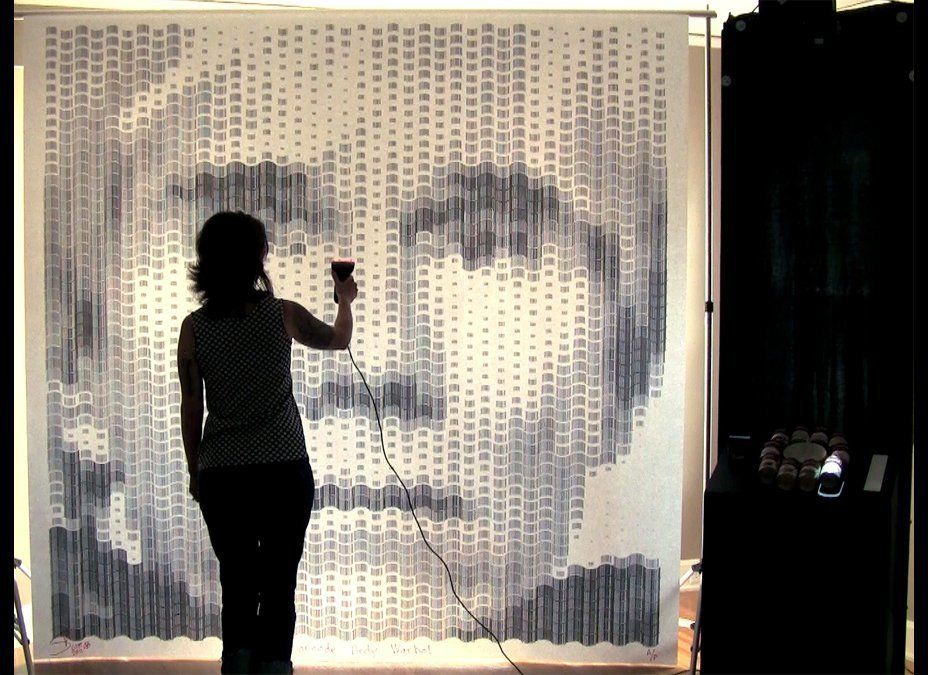