A new poll shows a distinctly different picture of the New Hampshire Senate race than other surveys. Reactions to the shooting and protests in Ferguson, Missouri show stark racial divisions by nearly any measure. And Americans' ice bucket challenge picks could start a different kind of cold war. This is HuffPollster for Friday, August 22, 2014.

DID SCOTT BROWN REALLY CLOSE THE GAP IN NEW HAMPSHIRE? - A new UNH/WMUR survey shows Scott Brown (R) just 2 points behind Sen. Jeanne Shaheen (D) -- a 10-point gain for Brown since UNH's last poll in July. The same survey also showed a number of other dramatic changes: Shaheen's favorability rating dropped by a net 16 points, and Democratic Gov. Maggie Hassan lost between 6 and 9 points to her two possible Republican rivals. Did New Hampshire's political atmosphere really change that fast? HuffPost Pollster's chart of the Senate race shows Shaheen leading Brown by an average 5 points, with the latest UNH/WMUR survey one of only two this year to show her with a slimmer margin. [Pollster chart, WMUR release] 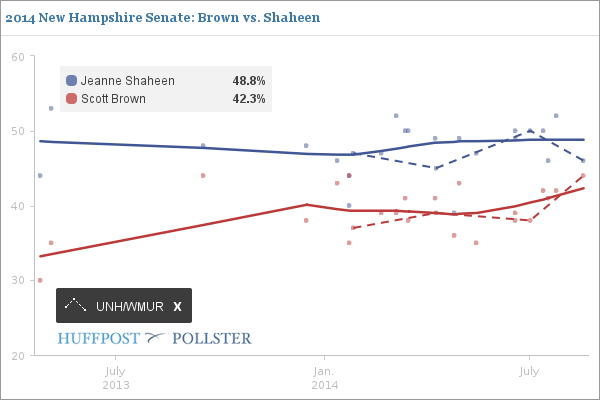 The outlier is always the story - Harry Enten: "[A] number of news organizations jumped on the poll as a sign that Brown is 'closing the gap' with Shaheen. I only have one question: Have we learned nothing? Take the average, people. In the final week of the 2012 presidential campaign, there were multiple polls showing Republican Mitt Romney winning in Iowa. In October 2012, there was a poll showing Obama winning Arizona. Neither happened. Even good pollsters will occasionally have a result that is an outlier, and with enough polling, you’re guaranteed to have outliers. Don’t make too much of any single poll. Focus on the average." [538]

Why the movement in the poll?' - Philip Bump: "What happened over the past month to narrow the race so much? Brown has hardly run a flawless campaign. The answer is two-fold. One, this poll has more Republicans responding than past polls. And, two, Republicans have shifted slightly more to Brown...In July, there was a five percentage point gap between the number of identified Democrats and the number of identified Republicans responding to the survey. In August, that flipped, and there were more Republicans. That's a swing of six percentage points -- which in itself could make up a significant part of the difference." [WashPost]

Daily Kos (D) isn't buying it - David Nir: "Now, UNH's numbers are a bit fresher than what's out there, so it's worth asking whether anything has dramatically changed in this race since last month, when UNH found Shaheen up by a 50-38 margin. But Andy Smith, who runs UNH's polling center, barely even tried to offer an explanation for this huge shift, claiming that Shaheen's campaign was being 'being weighed down by national politics, particularly the declining popularity of President Obama.' Say what?..[Obama's] not popular, clearly, but if one thing's for sure, his popularity hasn't declined [in 2014]—and certainly not since July alone...All that said, it's certainly possible that New Hampshire's Senate contest has tightened. But even if for some reason you trusted UNH completely, you should never rely on one single poll to form an opinion on a race. Certainly you'd never try to predict the outcome of a baseball game based solely on the score after one inning. It may well be that the next poll—the next 10 polls, even—all show the same thing as UNH has here. If that happens, then maybe UNH was right. It's certainly not impossible after all. But it's also possible they'll just get lucky—or will be entirely wrong." [DailyKos]

Steve Koczela: "On WMUR, if one poll is different than the rest, wait for more. See if it's an outlier or a new trend. Don't frantically rewrite storyline." [@skoczela]

Stu Rothenberg: "Here is a strrange suggestion: How about if we wait for another poll in NH before deciding where the Senate race is?" [@StuPolitics]

Jon McHenry (R): "I was disinclined to believe this one (1 in 20 and all that) ... Until reading Shaheen camp comment. Hmmm." [@jonmchenry linking to Politico]

Michael Biundo (R): "1 constant in politics for political polling...the methodology is flawed or the pollster is no good if your candidate is down. #nhpolitics" [@MichaelBiundo]

MORE THINK FERGUSON PROTESTERS HAVE GONE TOO FAR THAN THINK POLICE HAVE - Sarah Dutton, Jennifer De Pinto, Anthony Salvanto and Fred Backus: "The shooting of Michael Brown - an unarmed 18-year-old African-American man who was shot to death by a police officer in Ferguson, Missouri - has unleashed a wave of protests in Ferguson that have turned violent at times, as well as a forceful response by local police. Fifty-nine percent of Americans - including 67 percent of whites but just 43 percent of blacks - think the protesters' actions have gone too far, according to a new CBS News/New York Times poll. Fewer Americans are critical of the police response in Ferguson: 32 percent think the Ferguson police went too far in their response to the protests. But there are stark racial divisions on this measure. Half of blacks think the police went too far, while just 27 percent of whites agree. Instead, more whites (36 percent) think the police response was about right. Overall, nearly two in three Americans don't know enough to say whether the incident that sparked the unrest - the shooting of Michael Brown - was warranted. Whites and blacks differ on this question as well: 57 percent of African-Americans think it was not justified, while more than two-thirds of whites (68 percent) feel they don't know enough to say." [CBS]

SHOULD POLLSTERS GIVE AWAY THEIR WORK? - Annie Pettit: "A big debate has been ongoing in the polling business. Should pollsters run political polls for free?...Sometimes, it seems like anyone can generate good poll results. But to do so repeatedly demands time and money. Hundreds, perhaps thousands, of billable hours. Thousands of billable hours that could be assigned to a paying client who would keep your business alive. For me, there is an easy answer to this simple question. Should pollsters be paid? If their work is being used by political parties or media outlets, absolutely yes. If their work is being used by anyone other than themselves, absolutely yes. And on that note, the next time I spend hundreds of hours on a job, I expect to be paid for it too." [HuffPost]

AMERICA'S ICE BUCKET CHALLENGE PICKS: OBAMA, PUTIN AND KIM JONG UN - HuffPollster, with Emily Swanson: "Asked to pick from a list of potential 2016 presidential candidates who they'd most like to see take the ice bucket challenge, Americans made former Secretary of State Hillary Clinton the runaway winner, with 51 percent choosing her. Sixteen percent opted for New Jersey Gov. Chris Christie (R), 15 percent for Vice President Joe Biden, 8 percent for Sen. Rand Paul (R-Ky.), 6 percent for former Florida Gov. Jeb Bush (R), and 5 percent for Sen. Elizabeth Warren (D-Mass.)....Asked separately to pick a world leader for an international edition of the challenge, a 35 percent plurality of Americans rallied behind President Barack Obama, including 34 percent of both Democrats and Republicans. Unfortunately for them, Obama has already declined to dump ice water on his head, opting instead to give money. Second and third place went to the leaders of countries with which the U.S. already suffers icy relations: North Korea's Kim Jong Un, with 24 percent, and Russia's Vladimir Putin, with 19 percent." [HuffPost]

-Republicans see immigration as much bigger problem than Democrats do. [Gallup]

-The Monkey Cage model forecast points to a Republican takeover of the Senate, but the probability drops to 63 percent. [WashPost]

-Jonathan Bernstein notes that the trend in President Obama's job approval rating has remained "as flat as it can be" during 2014. At the same point is his presidency, George W. Bush's approval ratings were "tanking" in 2006. [Bloomberg]

-A new poll finds support for criminalizing the act of allowing pre-teens to play outside without supervision. [Reason Foundation]

-Hayley Munguia takes a look at the data on political corruption and finds things aren't actually getting worse. [538]

HUFFPOLLSTER: Stop Freaking Out Over The Results Of One Poll
Senate Seats Up For Grabs In 2014