Scott Jordan has deep pockets. Literally. But like most fast-growing startups, he could always use some extra cash. So the founder of SCOTTEVEST and TEC, which makes jackets and vests with extra pockets for gadgets and other gear, took his pitch to ABC's "Shark Tank" -- and got a little more than he bargained for.

While his company is on pace to make $24 million in revenue this year and has licensing deals with the likes of Ralph Lauren and Timberland, Jordan found himself under attack from billionaire "shark" Mark Cuban both on air and during a lengthy exchange on Twitter. ("Running a wire through a piece of clothing?" Cuban shouted at Jordan during the show. "That's a patent? Are you kidding me?")

Jordan's appearance on "Shark Tank" may not have gone exactly as planned, as is often the case with reality TV, but he says the show has brought newfound publicity and he remains as confident as ever about his business. He even harbors no hard feelings for the mercurial Dallas Mavericks owner who threatened to make him cry on TV.

"Who knows? Maybe Mark will start wearing SCOTTEVESTs at Mavs games and we can kiss and make up."

You've generated a lot of buzz -- good and bad -- since your appearance on "Shark Tank." Why'd you go on the show?

The reason I went on "Shark Tank" was because I love the show. I thought it was a great forum for me to introduce my company, my brand and me personally to the world. We're also a fast-growing company, and we needed capital to keep the company growing. I originally pitched SCOTTEVEST to "Shark Tank." TEC is the technology, but the vest is what consumes most of my time. What I realized in the pitching process was that the producer, Mark Burnett, gets a portion of every company featured, whether they get funding or not. When I got the materials, I thought 'Wow, am I really willing to give up a portion of a company on track to do $24 million dollars a year to Mark Burnett?' I did some math to see if the value of that percentage was worth the exposure, and I decided no, I could sell that percentage of the company and buy that exposure and control it. So, I scratched my head and I pivoted, as you do in business. I decided to pitch TEC instead, but I couldn't go in there and pitch TEC and then start talking about SCOTTEVEST.

What did you want the money for?

I was looking for a $500,000 investment to hire a management team that I would supervise, and do advertising and introduce the world to TEC. In part, that's been done thanks to "Shark Tank." We're already getting inquiries from major brand-name companies to get involved. Obviously, they edit the episode in its most dramatic format, as if I somehow surprised the sharks that I was pitching TEC, not SCOTTEVEST. The fact that Mark Cuban was interviewed after and he said that his primary goal was to make me cry on national TV, and how he went off about abuses of patent law seemed to be a little over the top, and I didn't really bargain for that. It got a little ugly and I did extend an olive branch to him in an effort to move on. I don't want to make an enemy out of Mark Cuban by any means.

I would have liked to get an investment, I would have wished the edit was more favorable, but those are risks that you take. I didn't plan on Mark engaging me in that way, but that's not a bad thing that a person with a million Twitter followers is engaging you in that fashion. After all of it, my wife and I had to decide whether it was going to be our first 15 minutes or our last 15 minutes, and we want it to be our first, and a launching pad to introduce the brand. Two years ago, we entered into licensing agreements with Ralph Lauren, North Face, Nautica, Calvin Klein, Jansport and Timberland. We have a full-on team reaching out and being reached out to, and we're going to bring TEC to other brands but TEC may very well have it's own brand: TEC for kids, TEC for streetwear. It has a much broader market base than SCOTTEVEST.

You were a corporate lawyer with no business background. What got you interested in the apparel industry?

I'm a gadget guy that was traveling a lot, and the businesses casual environment didn't allow me to have a sport jacket to store all of my devices, so I thought 'There's got to be a better way.' My wife, Laura, who would end up carrying all my gadgets when we went for a hike, said, 'Why don't you invent a vest to carry all these things?' I looked at the marketplace, and the only products were fishing vests and photographer's vest. They all had bulky pockets and you looked like a tourist wearing them. I wanted something with as much storage capacity, but to make it much more streamlined with hidden, intelligent pockets designed for specific things. Then, when using my headsets, the wires would always get caught on doorknobs and would practically pull my ear lobes off, so i thought 'Why can't I route the wires internally?' I filed for a provisional patent for TEC and then a full-blown patent.

Why has the idea taken off?

For us, the difference is inside. The exterior of the garment is supposed to be fashionable and good-looking, but you should be able to look at it and say, that could be anyone's puffer jacket or windbreaker, but the difference is when you see all the pockets and construction inside hiding all of those features.

What's been the biggest surprise?

I never expected to be in the clothing business. I wanted to come up with a great idea like you read about, patent it, license it and then just collect coupons for the rest of my life. But I found that that's not really the way it works. It takes a long time for a patent to be issued, and once it's issued, you've got to convince other people to license it. So while I was waiting, I started SCOTTEVEST as a proof of concept to show other clothing companies what this concept can do, and hoping that if they saw the success of SCOTTEVEST, then they would understand and license TEC. TEC was always intended to be the larger brand story because SCOTTEVEST only applies to this niche brand of travel, techie clothing, so the goal was to take TEC and license it to other companies just like Velcro did. But a funny thing happened along the way and SCOTTEVEST became so successful, primarily as a result of all the online stuff we're doing. We really utilize social media to connect directly with our consumers and create the name and face of the company. We've embraced technology from the beginning and it's been really effective for us. Last year at this time, we had a single digit number of employees, now we have more than doubled the number to over 20. Our sales have doubled as well and we're on Inc.'s fastest-growing company list, and we really feel like we're on to something.

What's the hardest part about being an entrepreneur?

I was a real estate and corporate lawyer, and the moment people find out you're a lawyer, they treat you differently -- they treat you like scum. The moment I decided to go to law school, I knew I wanted to get out, because no one likes lawyers! It's also been a challenge hiring motivated, trained people. The hardest thing initially and the hardest thing today is to recognize that you cannot do it all yourself. Great people have made this company what it is, not just me and my wife, and people can take this company so much further. It's really hard to find people in our area of Idaho. It's a community of 5,000 people and a resort town, so there aren't really workers, unlike metro areas where people are anxious to work really hard. Admittedly, I am demanding, intense and passionate, and it's hard to find people that can keep up, but it's important to be able to build trust in one person.

Husband-and wife-business teams tend to be a disaster. How have you managed to work so well with Laura?

Laura is awesome. She was working as a headmaster of a school, and she saw me floundering in law -- I was totally miserable. She told me to follow my dreams, so I quit my job and she assured me we'd live off of her salary for a period of time. She helped design the website and write copy in the begininning, but she said, 'There's no way in hell I could ever work with you. I'll help you get going, but them I'm going to do my own thing.' Eight years later, she's my 50-50 partner, co-founder and president, and the hardest-working person I know. There isn't one decision that she's not involved in. I know I'm the face of the company, but she's my other half. We don't have children, by choice, but our business and poodles are our children. She's truly the glue, I don't know where I'd be without her. She's tougher than me! Had I brought Laura on "Shark Tank," it would have been a better experience. She would have tore into Mark Cuban, but she has no desire for that type of attention. For me, I'm kind of oblivious. I love promoting my business and it just comes naturally. 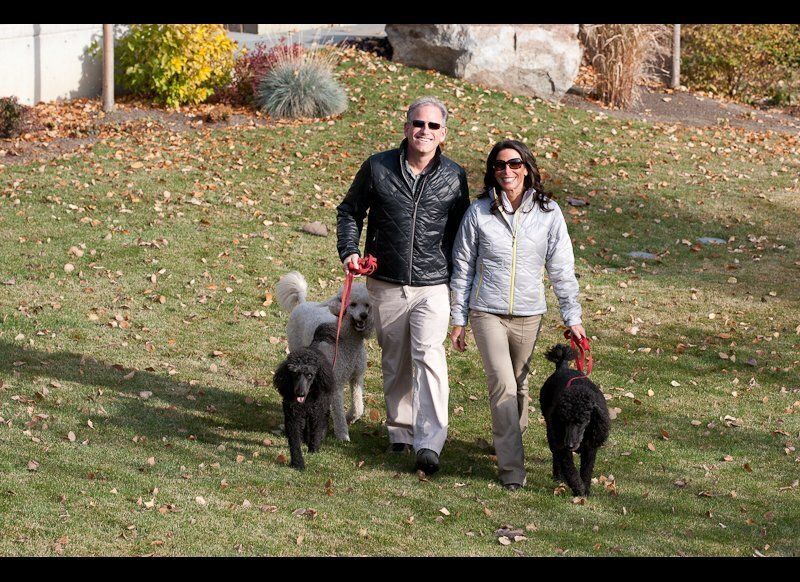