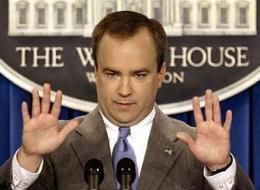 Long before the White House Press Corps became saddled with Dana "The Gift That Keeps On Giving" Perino, they got to receive their briefings from Scott "The Gift That Gave As Well As He Could Given The Relative Lack Of Confidence He Had In Just About Everything He Was Ever Asked To Say" McClellan. McClellan stepped down from the position in May of 2006, and has since penned a book that will finally allow him to do what he never could as press secretary: tell all.

Public Affairs, who will be publishing the book, has posted this excerpt, which gives one a helping of insight into how McClellan views his years of service:

The most powerful leader in the world had called upon me to speak on his behalf and help restore credibility he lost amid the failure to find weapons of mass destruction in Iraq. So I stood at the White house briefing room podium in front of the glare of the klieg lights for the better part of two weeks and publicly exonerated two of the senior-most aides in the White House: Karl Rove and Scooter Libby.

There was one problem. It was not true.

I had unknowingly passed along false information. And five of the highest ranking officials in the administration were involved in my doing so: Rove, Libby, the vice President, the President's chief of staff, and the president himself.

McClellan's book is titled What Happened, after the question he muttered to himself every night before the clutches of fitful sleep claimed him, and is scheduled for an April 2008 release.

UPDATES:
The Politico notes that McClellan intimated in a March 2007 appearance on Larry King Live that the President "did not originally know about the involvement by his aides."