The Wisconsin State Capitol has erupted in a torrent of lawlessness this week that schoolchildren will be reading about for years. No, I don't mean rowdy protests resulting in mass arrests. Even though some 300,000 people have visited the capitol in the last two weeks, the crowds have been peaceful and fun; no arrests have been reported. I mean the convulsion of lawlessness that has seized Wisconsin Governor Scott Walker and the republican leadership -- a track record that would make Richard Nixon proud.

As the Wisconsin Capitol remained in almost complete lockdown Thursday in violation of a standing court order, senate republican leadership turned up the heat on the missing 14 democratic legislators with an unprecedented series of new rules, some of which were quickly assessed as flatly unconstitutional by lawyers. On Thursday, 19 republicans passed a resolution authorizing the missing Senate Democrats to be taken into custody by any Wisconsin law enforcement officer for "contempt of the Senate." Senate Majority Leader Scott Fitzgerald said the actions were justified because the 14 "have pushed us to the edge of a constitutional crisis." 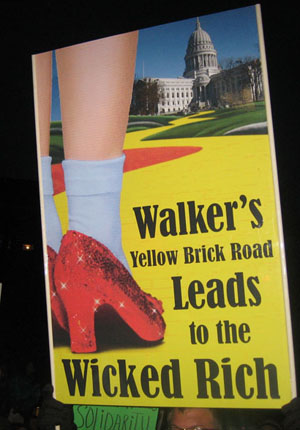 The latest legal ploy comes in the context of news reports that the Wisconsin 14, who left the state to delay Governor Walker's bill to eviscerate 50 years of collective bargaining rights for Wisconsin public employees, were preparing to come back under their own steam to fight the battle of the budget. One senate staffer explained that it would be impossible for the 14 to remain out, when budget bill deliberations actually get underway because they were needed to defend school children, the poor and the elderly against draconian cuts in the bill.

The unprecedented "arrest warrant" was taken as a preemptive strike. As the Senators were meeting, a Dane County Court Judge was poised to rule the capitol lockdown unconstitutional. The Republicans hoped to shift the focus of the TV news that night and the next day to their missing democratic colleagues. But a wrench was thrown in these plans when the prominent law firm of Cullen, Weston, Pines quickly reminded the public that "the Wisconsin Constitution absolutely prohibits members of the Wisconsin Senate from being arrested for non-criminal offense. The Wisconsin Senate' action today... has no basis in the law of this state. " Further, the firm argued that if the orders of the republican legislators were carried out, they themselves could be subject to a contempt ruling under Wisconsin statute which protects public officials from just this type of chicanery.

Late in the afternoon, the head of the Wisconsin Professional Police Association, James Palmer, pleaded for sanity in the State Capitol: "The thought of using law enforcement officers to exercise force in order to achieve a political objective is insanely wrong and Wisconsin sorely needs reasonable solutions and not potentially dangerous political theatrics."

Republican senators had been ramping up the pressure on democrats all week, passing a resolution Wednesday that fines the 14 $100 for every day they are absent. Lawyers point out that the $100 fine is likely also unconstitutional under Wisconsin law. They passed a resolution to allow the senate sergeant at arms to request the assistance of any law enforcement officer in this state to find and return any senator who is absent without leave. The republican senators needed the extra help, since no local law enforcement agency was treating the political brouhaha as a serious police matter. It is likely the Wisconsin's State Patrol will be suborned into the hunt. The State Patrol is headed by recently appointed, Stephen Fitzgerald, father to both the Senate majority leader Scott Fitzgerald and state Assembly Speaker Jeff Fitzgerald.

The Senate also assigned republican "supervisors" to the staff of he missing senators. For instance, Republican Senator Cowles is assigned to supervise the staff of Democratic Senator Hansen. Many saw this as preparation to fire democratic staff members or the ultimate move to expel democratic senators, which would indeed cause a constitutional crisis, beyond the one precipitated by Walker's unilateral dictates.

Since Monday March 1, the capitol building has been in an unprecedented lockdown as the governor attempted to clear the building in advance of his Tuesday budget address. Protesters, capitol workers, legislators, Congressmen and others were shut out. Windows were sealed shut. The lockdown continued in contempt of court, because a Dane County Judge ordered the capitol to open on Tuesday. When firefighters responding to an emergency call at the capitol Tuesday, even they were turned away (firefighters have stood with the protesters since the start of the fracas.) Although they were eventually allowed in to rescue a police officer from an elevator, Dane County Sheriff Dave Mahoney said enough was enough. He withdrew his men from the capitol, saying they were not hired to act as a "Palace Guard."

Faced with the problem of getting his supporters in to the Assembly Chamber on Tuesday, the governor and his guard escorted a cadre of lobbyists and well-heeled friends through a utility tunnel that runs from a parking lot across the street, under the capitol grounds to the capitol basement. Madison City Council woman Shiva Bidar-Sielaff heard that the tunnel might be being used for this purpose and went to check it out. She found about a dozen police officers guarding the tunnel entrance, some from Milwaukee, some in suits with unknown insignia. She witnessed an unmarked police vehicle screech into the garage. Out stepped the First Lady, Tonnett Walker, who was hustled into the tunnel as if the parking garage was under attack. "It was all very Men in Black," the City Council woman said with a laugh who watched with a handful of other observers. Other Walker supporters had been bused in earlier; the bus signs and arrows were still up on the walls.

Not surprisingly, the Governors plans to cut $1 billion dollars from public education and cap property taxes in order to force localities to balance their budget shortfalls on the backs of teachers and other public workers was greeted with wild cheers. Only about 20 protesters were allowed in and were quickly escorted out when one upstart let lose a single "boo." The private address took place in defiance of a standing court order to open the capitol to protesters, prompting democratic assembly leader Peter Barca to question the legality of the whole event under the state's strong open meetings laws.

Desks on the Capitol Lawn

On Wednesday, Assembly Democratic Representatives couldn't get their work done in a capitol in a virtual lockdown, so they took their desks out on the lawn for office hours. Democratic Rep. Nick Milroy spoke with constituents standing in the freezing cold -- the Wednesday low for Madison was -6 degrees -- not including wind chill. Milroy relocated his desk, complete with family pictures and trinkets onto the muddy lawn. On Thursday night, Milroy was wrestled to the ground by imported police trying to prevent him from getting inside the building to his office.

Representative Marc Pocan was so irate with ever-shifting rules and the open access republican legislators seemed to enjoy that he issued an "Open Letter to Whoever is Calling the Shots on the Lockdown at the State Capitol," demanding to know who was in charge and asking for a measure of fairness for the constituents of democratic legislators.

On Thursday, a lone protester stood in front of the parking lot which holds the capitol utility tunnel entrance with a sign "Rat Hole to Walker's Palace."

In the early evening on Thursday, a Dane County Court Judge ruled for the second time that Walker's virtual shut down of the capitol was an unconstitutional infringement on the rights of the protesters. An agreement was reached to return the Capitol to normal business operations by Monday. After talking to former Wisconsin Attorney General Peg Lautenschlager, Capitol Police Chief Tubbs and Sheriff Mahoney who explained the terms of the agreement, the protesters agreed to leave the building for cleaning. The 100 or so remaining protesters, who had stayed in the Capitol Building in an effort to keep it open, packed up their gear and left to the applause of Democratic Assembly members and countless other supporters who had been blocked from entering the building these past few days.

Lautenschlager summed up the two day-long court battle: "This is an important determination by the courts. First it says that actions of the state government officials are unconstitutional, and it also affords average citizens the right to be in their capitol on Monday to lobby their legislators and conduct normal business. It is a huge plus in terms of access and a huge plus in terms of signaling to Governor Walker and his colleagues that they will not be allowed to tread on people's constitutional rights."

All that drumming from the Wisconsin State Capitol is having a big impact. The governor's poll numbers are tanking and even the republican-friendly polling firm Rasmussen shows that only 41% support the governor's proposal to gut collective bargaining in the state, 56% support the workers. Another poll shows that if the election were held today Walker would lose in a rematch 52%-45%.

There are many shoes yet to fall in this dramatic battle in Wisconsin. Will the republicans attempt to enforce their illegal warrant against the missing 14? Will Papa Fitzgerald show for work in epaulettes? Will the governor start laying off 13,000 workers as promised, using real people with real lives as pawns in his political game? Stay tuned, politics in Wisconsin have never been this wild.

The Madison-based Center for Media and Democracy has been live blogging the historic Wisconsin protests since day one, check it out here. Tomorrow, over 100,000 people will be out in what may be the largest rally in labor history (certainly in Wisconsin history).