Wisconsin Governor Scott Walker was greeted in what is likely, by now, a familiar manner when he addressed business leaders in Springfield, Ill., Tuesday morning: By thousands of protesters.

According to the Associated Press, a giant, 20-foot inflatable rat (see below) was held up by labor groups protesting the Republican governor's stance toward collective bargaining rights and other issues.

Inside the Abraham Lincoln Hotel and Conference Center, however, Walker, who will face a June recall election, was met with multiple standing ovations from the Illinois Chamber of Commerce and the National Federation of Independent Business, the AP reports.

Walker used the opportunity to address and Illinois crowd to deride the state's financial health when compared to his own state's.

"Illinois and Wisconsin, like nearly every other state, had big deficits. We had a $3.7 billion deficit," Walker said, according to NBC Chicago. "A year later, after we balanced a $3.6 billion budget deficit, things haven’t gotten any better in Springfield. When you raise taxes on business and individuals, it drives away wealth."

The Wisconsin governor went on to seemingly compare himself to former President Abraham Lincoln as another controversial lawmaker who possessed "the courage to move the state forward," NBC reports.

"Wisconsin couldn’t wait. We had to take action," Walker told the crowd of hundreds of business leaders of his record on working with public employee unions, the St. Louis Post-Dispatch reports.

Democratic Illinois Gov. Pat Quinn released a statement in response to Walker's speech and pointed to a Chicago Tribune editorial published Tuesday that argued "while Wisconsin is a great place to vacation, Illinois is where you want to locate your company."

"One would wonder what a governor with a terrible economic record could have to say about jobs and economic growth," Quinn's statement read. "While Governor Walker might be fond of anti-worker and tea party rhetoric, the facts aren't on his side."

"We hope Governor Walker enjoyed his trip to Illinois, and that he saw for himself what a great place it is to do business," the statement continued.

Since Walker took office last year, Wisconsin has, according to federal data, lost more jobs than any other state, although the state's unemployment rate has gone down.

"I'm a union pensioner," protester Stan Warden told CBS. "I came out to support the cause. Walker should go back where he came from. I hope he gets recalled." 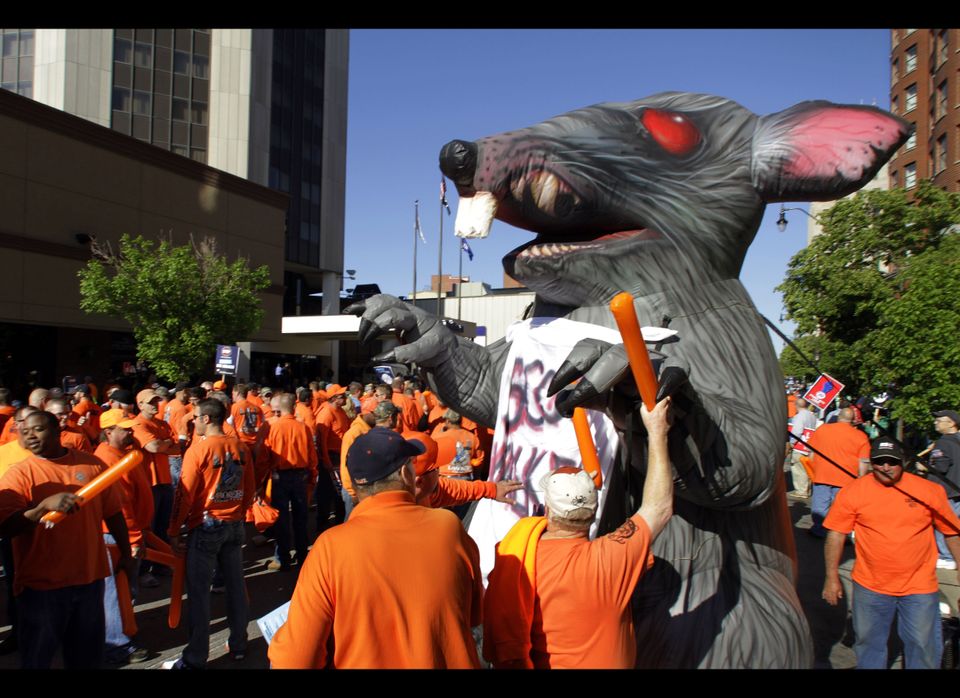 1 / 4
Scott Walker In Illinois
Protesters march outside the Abraham Lincoln Presidential Hotel where Wisconsin Gov. Scott Walker is speaking to the Illinois Chamber of Commerce Tuesday, April 17, 2012 in Springfield, Ill. Walker says he's using Illinois and its many problems as an argument for keeping him in office. The first-term Republican faces a recall election in June primarily because he restricted union bargaining rights for state employees. (AP Photo/Seth Perlman)