WASHINGTON -- Wisconsin Gov. Scott Walker's (R) campaign sent a fundraising email Thursday boasting that he is once again taking on unions and stands ready to sign legislation that would deal a serious blow to labor forces in the state.

"Governor Scott Walker will sign legislation to make Wisconsin a 'Right to Work' state, prohibiting employees from being forced to join a union against their will. It's the right thing to do for job creators and employees alike," reads the email sent by Friends of Scott Walker, the governor's political arm. "But you know how it is: It threatens the power the Big Government Labor Bosses crave and they are going to come after him with everything they've got."

The GOP-controlled Wisconsin state Senate approved a right-to-work bill Wednesday, and the measure will now head to the GOP-controlled Assembly, where it's also expected to pass. Walker has promised to sign the legislation when it reaches his desk.

Under U.S. labor law, when a workplace unionizes, the union must represent every single employee in the bargaining unit -- even the ones who didn't vote for the union. Right-to-work measures allow those anti-union workers, however, to avoid paying fees to the union, though it is still bargaining on their behalf.

Such measures can cripple labor. Bargaining and organizing costs money, but unions have fewer funds to work with in places with right-to-work laws; workers have less incentive to voluntarily pay unions that are obligated to represent them anyway.

If Walker signs the right-to-work legislation, Wisconsin would be the 25th state with such a law.

"Governor Walker is a conservative champion," reads the email sent Thursday. "He is a bold reformer who dares to take on the Big Government Labor Unions and he wins. ... What bothers the Big Government Labor Bosses the most is that Governor Walker says what he means, does what he says, and gets great results. Now the attacks he will face will be unlike anything you have ever seen before and he needs your help more than ever."

Walker hasn't always wholeheartedly embraced right-to-work though. With his anti-union credentials already strong after signing a law in 2011 that struck at public employee unions, he really wasn't looking for another fight. Walker had said in recent months that right to work would be a "distraction." Republican legislative leaders, however, decided to push ahead.

The campaign email is below: 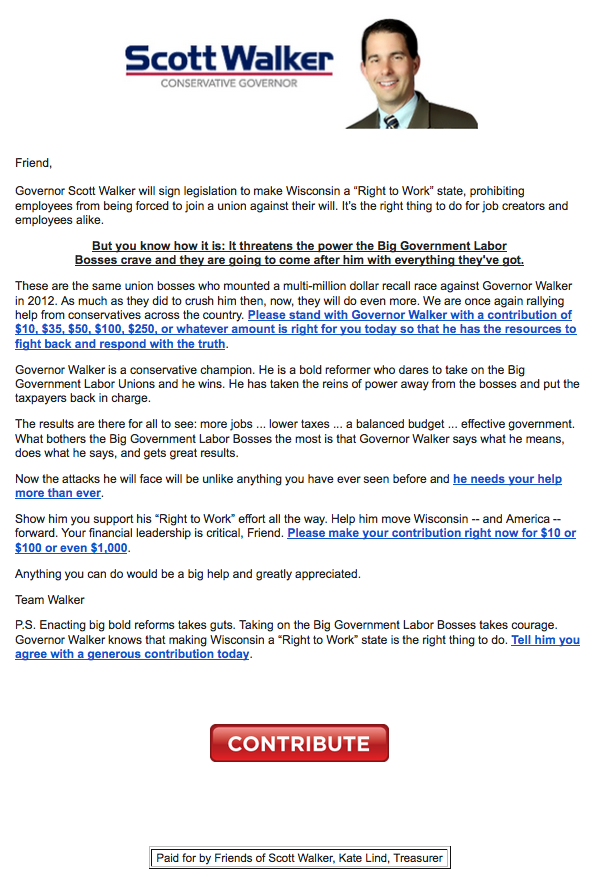 UPDATE: 11:18 a.m. -- Friends of Scott Walker sent out a slightly different version of the email later on Thursday:

1 / 10
Scott Walker
FILE - In this Jan. 3, 2011, file photo Wisconsin Gov. Scott Walker speaks at an inauguration ceremony at the state Capitol in Madison, Wis. More than a year after the standoff over union rights that rocked Wisconsin and the nation for weeks, the Republican Governor will face Milwaukee's Democratic Mayor Tom Barrett in Tuesday's recall election. (AP Photo/Morry Gash, File)
AP