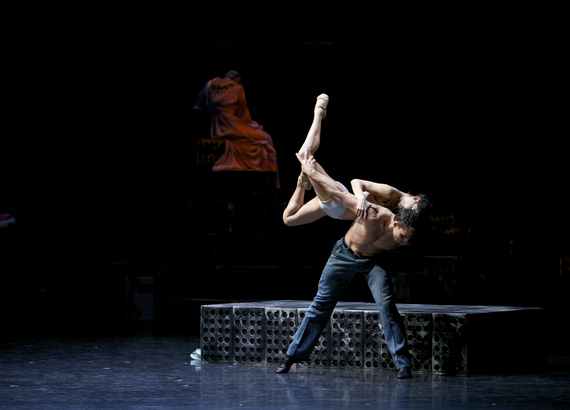 In a welcome departure from the one-note depictions of sex in the male-dominated world of ballet, the tiny, sinewy Martin calls the shots in this scene. The balance of power has shifted - after her husband struck her in a drunken rage, and she fled their claustrophobic New Orleans tenement apartment. Sober and whimpering upon her return, he spins and drags and upends her, at her hungry command; she flings herself at him repeatedly, in a flying half-twist, challenging him to catch her at the peak of her jump. 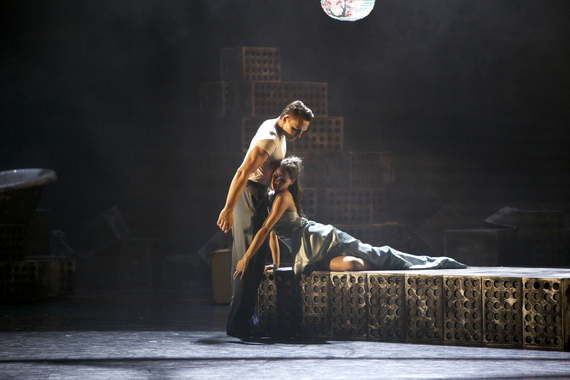 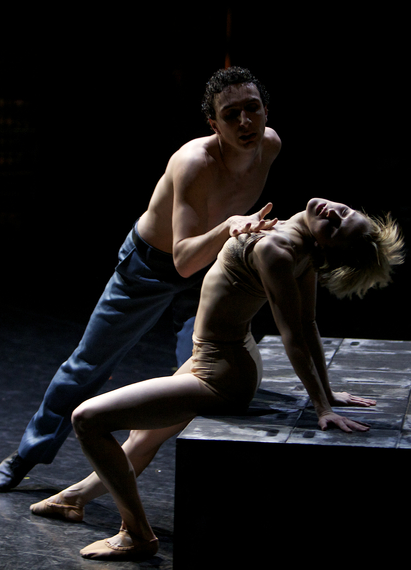 This is not a relationship that is likely to end well but, for now, Stella is in control, as she is at the mournful end of this Southern gothic tragedy, when she makes the anguished decision to commit her sister Blanche to a mental asylum. The sensual Martin is magnificent throughout, a firecracker. Cavallari, stocky and ripped, plays the sexual predator with attention to the small but explosive details of body language, wisely avoiding caricature -- not an easy feat when you must swagger in the footsteps of Marlon Brando. 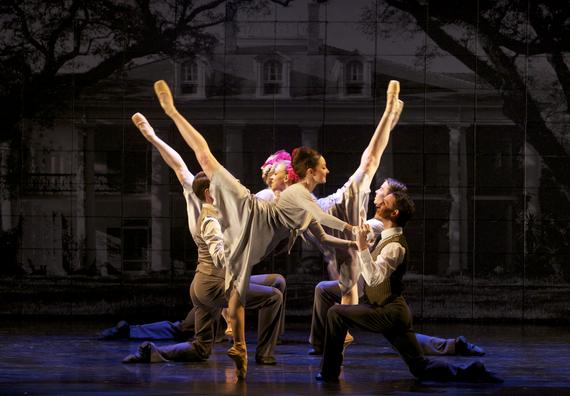 Having decided, in tandem with stage director Nancy Meckler, to flesh out Blanche DuBois' backstory, to unravel the narrative and present it in chronological fashion, Lopez Ochoa rose to the challenge of portraying the assorted sex acts that, in Tennessee Williams' 1947 classic, take place offstage, or are mentioned only in passing in the dialogue. She draws expertly and seamlessly from a range of dance styles, never straying far from classical ballet, in a manner that flaunts the dramatic and technical flair of this handsome company. 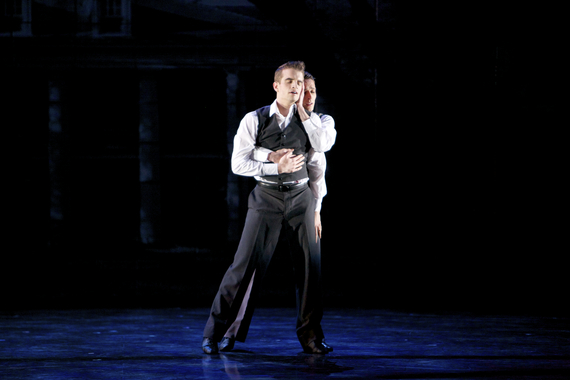 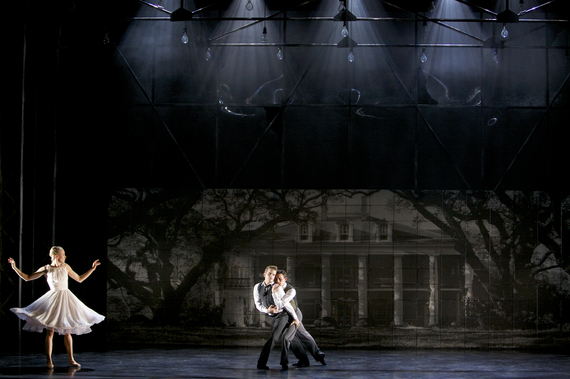 Sexual exploits start with the homosexual encounter between Blanche's boyish husband Alan and a man whom he meets at their wedding dance -- a variation on the Romeo and Juliet meet cute at the Capulets' ball, that here manifests as an unaffected and moving duet. This leads to a brief threesome, full of intertwining arms and confused glances, until Blanche's revulsion -- or jealousy, or both -- drives Alan to suicide. Throughout the evening, the figures of Alan, in bloodstained shirt, and his lover reappear to dance with Blanche whenever she slips into an alcoholic haze -- a striking choreographic gambit that embodies her frequent hallucinations. 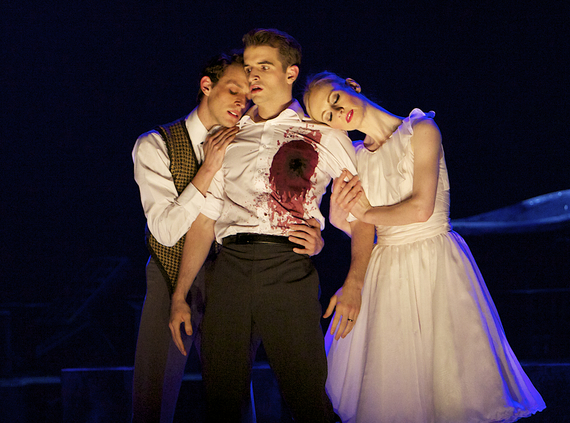 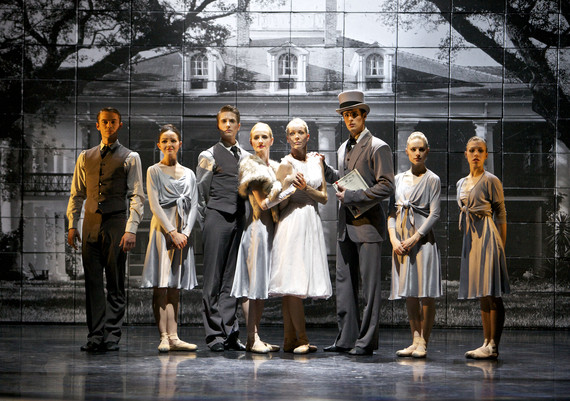 The DuBois family estate crumbles -- literally, in a triumph of scenic design in which a massive backdrop, emblazoned with a hazy photographic image of a stately Southern plantation home, explodes into a mass of wooden packing crates -- driving the destitute Blanche to prostitute herself in a seedy hotel. The hotel sex is impersonal, mechanistic, efficient. 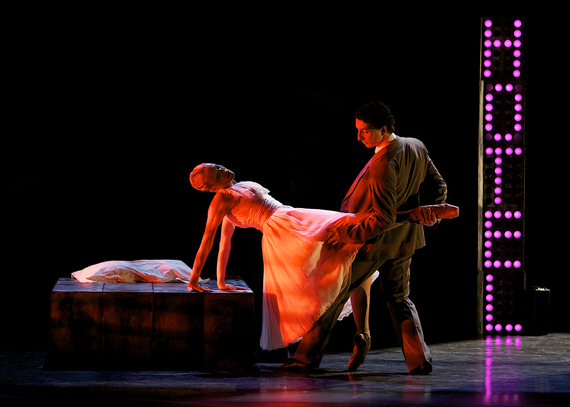 The lonely Blanche seeks comfort in seducing a young boy. In another twist on Romeo and Juliet (MacMillan's version), the boy lies on his back as she perches on his raised shins, arching her spine into a crescent.

In the rape scene, movement and score are stripped to a stark minimum. After taunting Blanche (danced on Thursday and Friday evenings by the statuesque, mesmerizing Eve Mutso), stripping her and kicking her to the floor, Cavallari props her against the bed (assembled, like the rest of the set, from packing crates) and smashes her against it, accompanied only by what sounds like the repeated slamming of metal doors that won't stay shut.

Even crumpled in stillness, Mutso conveys a mix of fragility and willpower. In motion, she calibrates her movement to suggest a constant sense of being slightly off-balance, on the brink of collapse, the elegant sweep of her preternaturally long arms and legs swiftly fractured by bent elbows and knees. 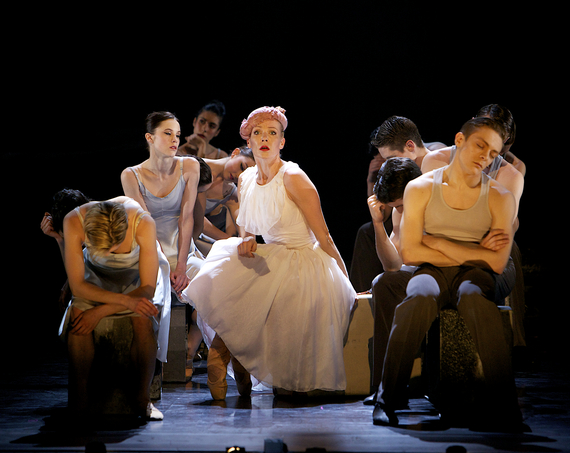 Lopez Ochoa's command of the ensemble is no less compelling than her portrayals of intimacy and domestic violence. She gives the crackerjack corps de ballet a stern Graham-based vocabulary with which to drive Blanche out of her home town. Maneuvering packing crates into two tight columns, they become a seething mass of humanity on the crowded streetcar named Desire. They form two rival teams in a bowling alley, their high-octane swing routine fired up by a jukebox. In the final scene, as the doctor in a lab coat arrives to take Blanche away, the men and women of the corps appear as a menacing crowd in identical black dresses, crimson carnations sprouting from their mouths - a surreal mushrooming of the scene in the play in which a blind Mexican flower seller offers Blanche a garish bouquet of "flores para los muertos" (flowers for the dead). 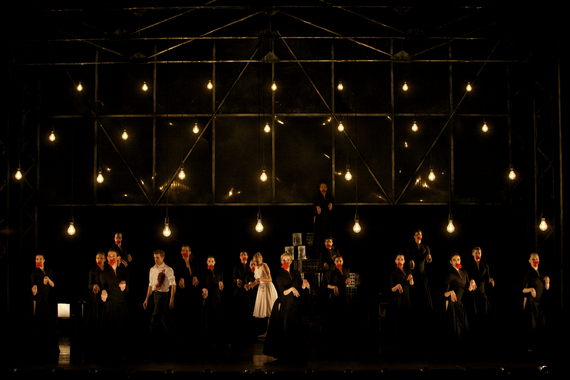 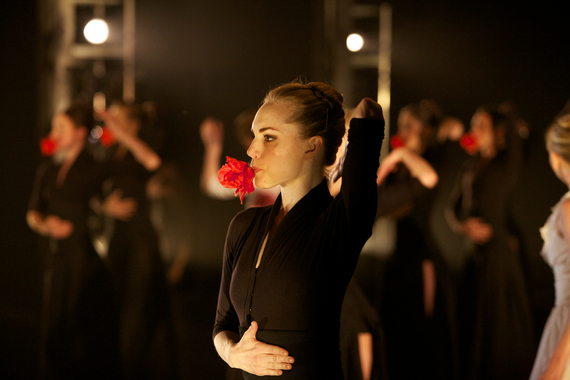 The ballet opens and closes with the same image of Blanche reaching for a naked light bulb that descends from the ceiling. With gently fluttering hands and skittering feet, her spine arching and twisting, her head thrown back in hope and trepidation, the layered skirt of her white dress floating as she pivots indecisively, she seems to hover delicately over the floor. The gossamery manner in which she steps on and off pointe and makes swift, fine-grained changes between quarter-pointe and full pointe, belies the wondrous plasticity of her insteps, and remarkable control. 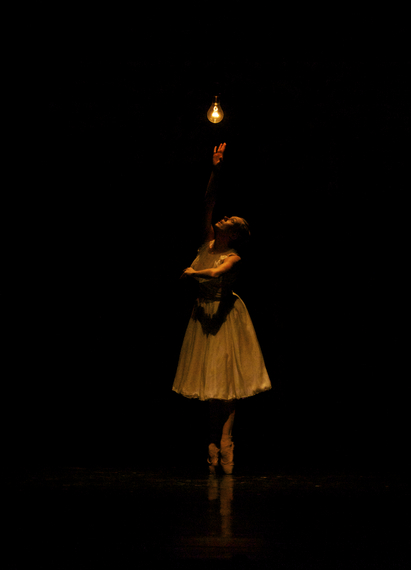 Program notes tell us that Meckler and Lopez Ochoa were drawn to the image of a moth: Williams originally intended to title his play The Moth and makes reference in the play itself to Blanche's "uncertain manner... that suggests a moth."

Beyond the inventive uniting of drama, dance, score and set design to illuminate Williams' psychological melodrama and caustic social commentary, this Streetcar brilliantly evokes the 19th century Romantic classic Giselle, in which a good-hearted peasant girl is driven to madness by the betrayal of a deceitful, two-timing aristocrat.

Ivor Guest could have had Blanche DuBois in mind when he recapped the first Act of Giselle, focusing on "the fragility of the heroine, her mind balanced between reason and madness." Though Blanche is the aristocrat in Williams' tale, she is twice betrayed -- first by her secretly gay husband, and then by the working class Stanley, who resents her highfalutin ways, offended by the reminder that his wife comes from the same stock. The droit du seigneur exercised by the duplicitous Count Albrecht is here remodeled into the hypocrisy very much alive in 1940's America, that allowed men to sow their wild oats and to treat their wives like possessions, while branding women who had sex outside marriage as damaged goods, outcasts, even insane.

There are thousands of papers stretching back over hundreds of years, affecting Belle Reve as, piece by piece, our improvident grandfathers and father and uncles and brothers exchanged the land for their epic fornications - to put it plainly!
- Blanche in Scene 2 of A Streetcar Named Desire remarks on the dissolution of the DuBois family estate

Upon Giselle's death (or suicide), she is drawn into a gang of ghostly, moth-like maidens, draped in layers of white gauze, who have been similarly jilted and are bent on revenge against all men. The Wilis and their icy, shimmering, relentless choreography in the second and final Act of Giselle reflected a 19th century anxiety about growing numbers of unmarried, unmoored women whose sexual appetites could not be contained.

In the second Act of Streetcar, as Blanche's hold on reality becomes increasingly tenuous, the ensemble women join her in her moth-like fluttering under a score of naked lightbulbs that descend from the rafters; the stage dims to resemble the eerie nights in the forest policed by the vigilante Wilis.

19th century nerves were calmed when the dead Giselle saved Albrecht from death at the hands of the Wilis - a female self-sacrifice to ensure male survival.

In Streetcar, Stella sacrifices her sister in order to uphold the patriarchy. 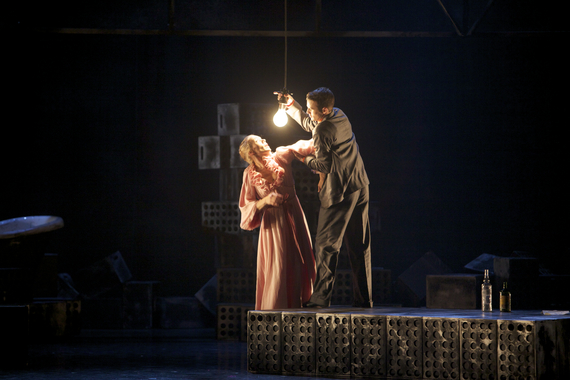 The image of an irresistible but unattainable, and sometimes cruel, light is further cemented by the repeated deployment of Ella Fitzgerald's recording of Harold Arlen's 'It's Only a Paper Moon,' that at strategic moments serves to highlight Blanche's retreat into fantasies and fictions that make life more bearable ("it wouldn't be make-believe/ if you believed in me.") 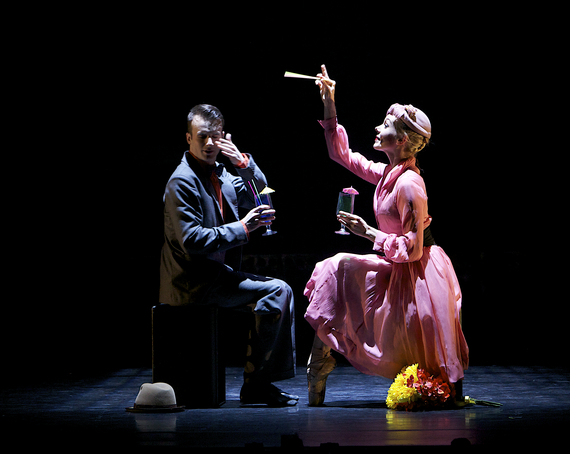 Only one element seemed lacking in the ingenious and austere set design: a lighting scheme to indicate the curtains which divide the cramped space in the Kowalskis' flat -- a crucial device in the play that underscored how lack of privacy stoked tensions between its inhabitants.

The only gratuitous detail in the marvelously inventive staging was Cavallari's roaring of "STELL-LAHHHH!" after she escaped his drunken assault. Lopez Ochoa should have trusted her choreography -- and the wailing solo saxophone that accompanied it -- to convey Stanley's brutish needs. After his poker buddies shove him into the bath to cool down, Cavallari rips off his water-logged T-shirt and chews up the stage in a desperate quest to track Stella down. There was no need to translate his magnificent body language into a verbal howl. Tennessee Williams would likely have edited that out.

Catch Scottish Ballet on the rest of its American tour, through May 30th: check tour dates for San Antonio, Houston, Pittsburgh, Charleston and Washington, DC on their website.