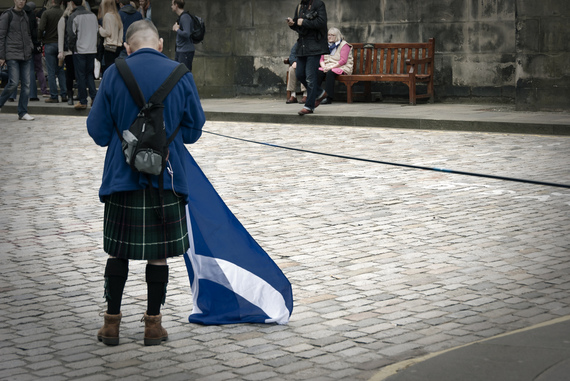 The only mention of Scotland in Avi Tuschman's Our Political Nature is a reference to the dangers of inbreeding among Hebridean bumblebees, yet the author's anthropological examination of what divides groups in societies offers plenty of food for thought as Scots consider whether to break their 300 year old political ties with their English cousins.

Justice, and especially social justice, has become one of the key themes advanced by supporters of independence. The nationalist argument linking separation with the alleviation of poverty is intrinsically one which claims there is some facet of the Scottish character which makes Scots more willing to recognise and tackle social injustice than would people south of the border.

It is an argument that Tuschman engages with.

By expounding the significance of evolutionary, genetic and personality factors as an influence on politics, Tuschman is suggesting that the structure of the political spectrum is biologically rooted in a society's population. While levels of nationalism and ethnocentrism vary predictably in a population, Tuschman sees these sentiments as reflecting deeper personality traits that have a substantial heritable component.

In parts of his intellectually engaging book packed with all the charts, graphs, and quantitative data one might expect from an evolutionary anthropologist, Tuschman offers some hope that our political views might well evolve with age, even if such change may itself be pre-determined.

"If you're not a liberal when you're twenty-five, you have no heart; if you're not a conservative when you're thirty-five, you have no brain," is a phrase attributed to a host of political figures, notably Churchill. While Tuschman points the general finger at the French statesman François Guizot, his broader point is drawing attention to the underlying meaning behind this view: that "a sensible person is supposed to begin life on the left by virtue of emotion, and to migrate to the right with a mature mind."

Tuschman looks at this question analytically. He examines numerous studies looking at the supposed 'openness' of youth and contrasts that quality with the increased 'conscientiousness' of individuals as they get into their late twenties, have kids, take on mortgages and generally become more aware of risks.

This is broadly correct, Tuschman argues, with people tending to become "more cynical and conservative" after their mid to late twenties, but he gives the aphorism a mischievous update in neuroanthropological terms: "If you don't trustingly take risks and seek thrills when you're twenty, you have an underactive limbic system. If you don't cautiously control emotional impulses and warily consider the self-interest of others when you're thirty, you have an immature prefrontal cortex."

With polls in Scotland indicating a narrow majority for remaining in the UK, the question of how genes, age factors, limbic systems and prefrontal cortexes may interact in shaping the result on September 18th is an important one.

The case of a family I'm acquainted with in Edinburgh may be relevant here. This professional family is comprised of two English born parents who are voting yes to independence, while their Scottish born and raised offspring are voting no. For these risk conscious and career minded young Scots (who are able to vote no due to First Minister Alex Salmond's cunning plan to boost the yes vote by reducing the voting age) their decision to reject independence is motivated by the belief that it will be easier finding jobs as citizens in a country of 63 million people with the 6th largest economy in the world than in a country with 5 million people which would be ranked around 48th globally by GDP.

One left-right distinction which Tuschman addresses is between the conservative belief in a just world and the liberal conviction that structural forces limit the individual's capacity to break out of unfair circumstances. The person who leans towards the right is more likely to say that the world is fundamentally just, meaning that people get out of life what they put in; put simply, people get what they deserve - good or bad. Liberal minded people, by contrast, are more likely to believe the world is fundamentally unjust and to attribute particular circumstances such as poverty, poor health or a poor education to factors outside the control of the individuals concerned.

This traditional conservative-liberal paradigm explains some of what is going on in Scotland right now. Unsurprisingly, supporters of independence are far more likely to be found on the left than on the right of Scottish politics. Meanwhile, to paraphrase First Minister Alex Salmond, the number of Conservatives voting for independence may fall short of the number of pandas at Edinburgh Zoo.

While the Labour Party, like all the main parties, is solidly behind the no campaign, the big unknown is to what extent traditional Labour supporters might vote yes. Independence can only be achieved if a large enough number of Labour voters plump for independence. This is why the Yes Campaign has sought to link a vote for independence with a renewal of the NHS, the welfare state, and a return to the egalitarian vision of the Scottish Labour founders.

Scotland may have played a key role in the creation of the British welfare state, but another strain in the Scottish character is the puritan focus on thrift, prudence, and an honest day's work for an honest day's pay. Ironically, it is the Scottish understanding of prudence and how to make a profit out of fear, risk and uncertainty that has contributed to the historic strength of Scotland's banking, insurance and life assurance sector. When Thomas Hobbes argued in Leviathan that "feare is the motive to rely on" he could just as easily have been espousing a motto and business model for Scotland's financial services sector as warning about the perils of existing in the state of nature.

If Scotland ends up rejecting independence on September 18th that does not mean, as some nationalists would suggest, that fear has triumphed over hope. Instead, I think that Scots will have fallen back on the same instincts which made Scotland such a successful hub for finance and life assurance. They will have demonstrated to the world that in order for us to survive and live to hope for the best, we must reliably plan for the worst. It is this instinct in our Scottish natures for how to balance hope and fear in order to survive and prosper in this world that may just keep Scotland in the United Kingdom this Thursday.

David Miles is a Carnegie Scholar at the University of St Andrews researching American, British and German constitutionalism. He is a contributor at the Scotsman, the Daily Beast and Huffington Post.