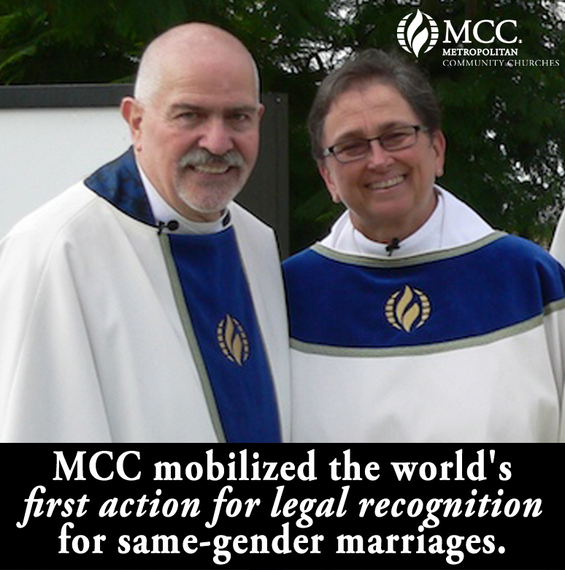 Over my decades of ministry, I have married hundreds of same-gender couples, and MCC has performed tens of thousands of marriages.

Early in my ministry, two elderly women, Connie and Eva, came to me to marry. They met in 1932 in Marlene Dietrich's lesbian-friendly nightclub in Berlin. Eva was German; Connie was African-American. They were separated by World War II but reunited when Eva came to live with Connie in the United States. For decades, they lived as "Mrs. Winne and her maid Connie" until they found MCC and realized they could finally be authentically who they were: lifelong lovers, married in every way but in the eyes of the law. Everything changed when they knelt together at the altar to profess the love they had shared for 40 years. They were finally able to be open.

In 1975, Rev. Freda Smith, an MCC pastor, performed the wedding of Anthony Corbett Sullivan and Richard Frank Adams. The marriage laws in Colorado did not specify gender, so a county clerk saw no reason not to give them a license. MCC performed the first legal same-gender marriage in the country!

In June of 1970, The Advocate published "Perry Plans Marriage Test." Reporter John Zeh described Rev. Perry's plan to challenge California's opposite-gender-only marriage laws. And he did! Represented by LA attorney Al Gordon, Rev. Perry brought the suit on behalf of Neva Heckman and Judith Bellew, a couple whose wedding he officiated in 1969. MCC mobilized the world's first action for legal recognition for same-gender marriages. The lawsuit was dismissed, but the struggle had begun.

In 1971, Life magazine devoted two pages to Metropolitan Community Churches in an article called "Homosexuals in Revolution: A Church for Homosexuals." Rev. Perry was pictured performing a wedding ceremony for Andre Charland and Richard Castle. The caption noted that marriages were being performed, but they were not legal -- an indirect recognition of the inequality we faced.

All along, we knew that dismissing our marriages was unjust and probably illegal. For decades, MCC members around the world joined Rev. Perry in Valentine's Day actions. We would go to the local officials, as same-sex couples, dramatically ask for a marriage license, and just as dramatically be turned down.

When Valentine's Day rolls around next February, it is likely that all couples who choose to marry will be able to do so in the United States and in a growing number of other countries.

We know that being true to ourselves and our families is having an impact. When an MCC minister, Rev. Roberto Gonzalez, performed the first public same sex wedding at an ILGA conference in Rio in 1994, no one dreamed that Brazil, Uraguay, Argentina, Mexico City, Colombia, and Venezuela would today recognize legal marriages or civil unions.

When Rev. Dr. Brent Hawkes of Canada researched Canadian law and performed Canada's first legal marriage in 2001 -- and it held up in court in 2003 -- we knew the orbit of planet justice had shifted on its axis.

History is being made. We have told our stories, claimed our stories, and treasured our stories. As Evan Wolfson stated in a recent Face the Nation interview, even if SCOTUS rules against marriage equality, we will continue to work for equality state-by-state.