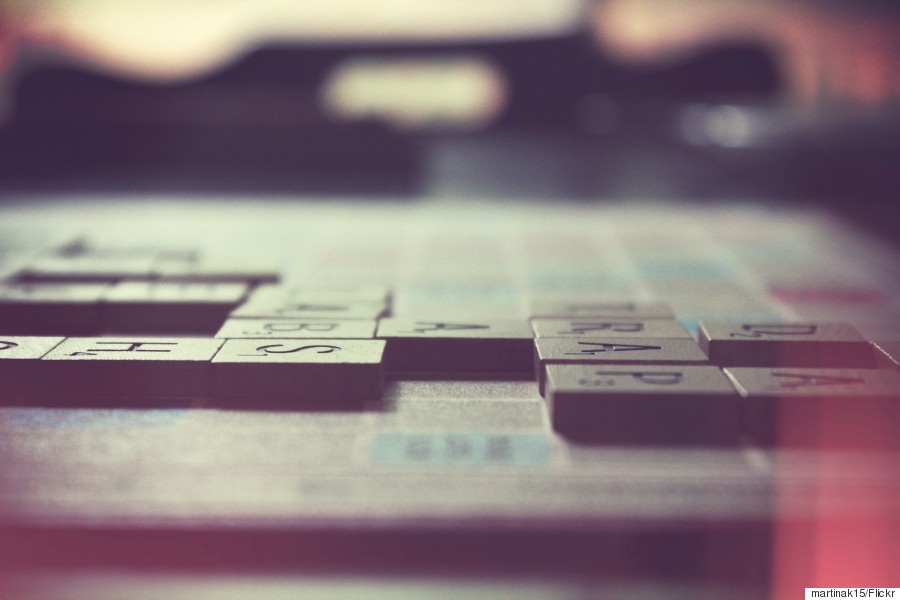 As a self-professed Scrabble obsessive, John D. Williams Jr.’s new memoir Word Nerd caught my attention. Its subtitle -- Dispatches from the Games, Grammar, and Geek Underground -- intrigued me because when it comes to Scrabble play, I’m less interested in the art of constructing cool, esoteric words under given restrictions than I am in the art of winning at Scrabble.

I play it often at a neighborhood bar with my boyfriend, and complain indignantly when he proudly presents a word like “gourde” (Haitian currency), racking up all of 10 points because he failed to notice a nearby double word score tile. “That’s not the point,” I’ll tsk irritably. Although I’m passionate about language, I play Scrabble because it challenges my spatial skills, and taps into my competitive nature. I unabashedly play “qi” whenever possible, in spite of never remembering the definition.

Williams conceded in an interview that, on some level, Scrabble play has little to do with language. “Word lovers understandably gravitate to the game. But people who like strategy are equally drawn to the game,” he said. “Many chess players and card sharks make the transition to Scrabble because it has more ‘action’ and scoring.”

Though his book recedes into a few pallid asides, including Williams’s own questioning of his grammatical pedantry and a few scenes from Scrabble tournaments that non-players might not find the humor in, his insight into what it takes to excel at the game, as well as how words are added and removed from the dictionary, make for a worthy read.

When it comes to Scrabble chops, Williams says a “good working vocabulary” and spelling abilities are no-brainers. But, he says, “people often don’t realize it’s very much about math and spatial relationships as well. One has to assess the board, calculate all the possibilities in terms of both points and positioning, that sort of thing. And remember, a good Scrabble move is not always about the most points.”

And, there's a bit of luck involved -- 25 to 30 percent of Scrabble success can be attributed to it, according to Williams.

Aside from luck and spatial skills, a close acquaintance with the Scrabble dictionary, which has its quirks, is helpful. Words can be added or removed, and there are questioned inclusions, such as onomatopoeic words ("brr," "hmm," "whoosh.") Williams cites his favorite odd inclusion as "rei," “an erroneous English form for a former Portuguese coin.”

Word additions, Williams writes in Word Nerd, typically arise when foreign words have been "assimilated into English," or when technological or vernacular jargon goes mainstream (read: "email" and "spam"). This process has been historically linked to the "reading and marking" process used at Merriam-Webster and other dictionaries. Used to determine a new word's worth or an old word's changing meaning, dictionary editors mark usage in magazines, newspapers, scholarly journals, and elsewhere.

Of course, social media and our shifting perception of dictionaries from dusty print volumes to amorphous digital resources make this process more complex -- do oft-tweeted words qualify, or must more traditional publications validate a word's weight? According to Williams, only time will tell.

Word deletions have a more fraught history. Though some removals are the result of a proper nounification of a word -- Williams cites "stetson" as an example of an improper noun that was briefly considered proper due to its brand associations -- some are the result of anti-defamation complaints and other political demands.

In the book, Williams recalls an incident in the early '90s when a competitive player challenged a slur against Jews and was appalled to find that it was listed in the Scrabble dictionary. She set out to remove offensive language from the books, and ultimately succeeded in scrubbing slurs without alternate meanings. So, "chick," for example, remained, because it has a second, inoffensive definition.

"I was able to enact a compromise: the Scrabble dictionary in bookstores has about 175 words removed. But all words are still allowable at official Scrabble clubs and tournaments, which have their own book," Williams said. "It's naïve to think words are going to disappear from our language and culture simply because they are removed from a book."

This is just one example of the differences between competitive and "living room" play, as Williams calls it. Folks engaged with the latter, he writes, are more likely to call the National Scrabble Association with complaints about a word's placement in the dictionary -- foreign words and the aforementioned onomatopoeias are the most contested. And, relative to the recreational set, competitive players are "much more intense," Williams says. "[There's] very little chitchat."

While my boyfriend is happy facetiously quibbling over the meaning of "qi," I'm more inclined to silently concentrate on my next strategic move, considering the numbers etched on the tiles as carefully as the letters.