From dry skin to mosquito bites, there are a million little reasons why we itch. But sometimes, scratching an itch can make you feel, well, itchier -- and a group of scientists has a possible explanation for why this happens.

On Wednesday, researchers at Washington University School of Medicine in St. Louis published a study which found that scratching an itch can cause minor pain, leading the brain to release serotonin -- the "happy" chemical that helps regulate mood -- which can sometimes make an itch feel more intense.

"The problem is that when the brain gets those pain signals, it responds by producing the neurotransmitter serotonin to help control that pain,” senior investigator Zhou-Feng Chen, PhD, who's also the director of Washington University’s Center for the Study of Itch, explained in a written statement. “But as serotonin spreads from the brain into the spinal cord, we found the chemical can ‘jump the tracks,’ moving from pain-sensing neurons to nerve cells that influence itch intensity.” 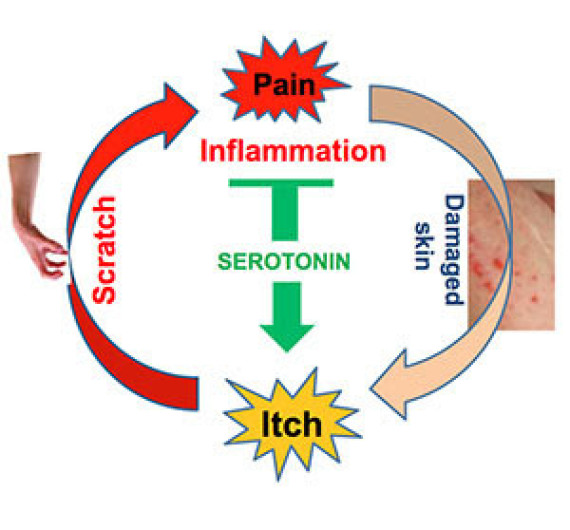 This finding doesn't exactly translate into a "cure" for itches. For one thing, living a serotonin-free life isn't realistic for humans, since the chemical is crucial to our happiness, sleep and relaxation, as well as growth and bone metabolism.

For another, there's still more research to be done on how humans experience itches.

Dr. Gil Yosipovitch, chair of the dermatology department at the Temple University School of Medicine and director of the Temple Itch Center, also weighed in on the case.

“The big issue is that mice and humans are quite different in a lot of aspects," he told HuffPost. "It’s an interesting model, but we’re very far away from solving the complexity of the itch-scratch case. There are a lot of other components to it, and it’s not going to be translated to an immediate drug. The problem is that these studies come out and people say, 'Hey, why don’t you give me a serotonin reuptake inhibitor?' And we're just so far away from that.”

For now, the next time you feel an itch, you'll just have to resist the urge to scratch -- if you can.