Parents across the Internet rejoiced this week, declaring themselves well rid of "screen time guilt" after an announcement by the American Academy of Pediatrics strongly signaled it will amend media guidelines discouraging screen time for children under two and limiting it to two hours a day for older kids... after the organization's 2016 national conference on the topic.

News that TVs and iPads are healthier for our infants and toddlers than previously thought would indeed be cause for celebration as a world of cheap, flexible babysitting opens. But it's a little premature to be ordering cake and filling balloons, for a few reasons. 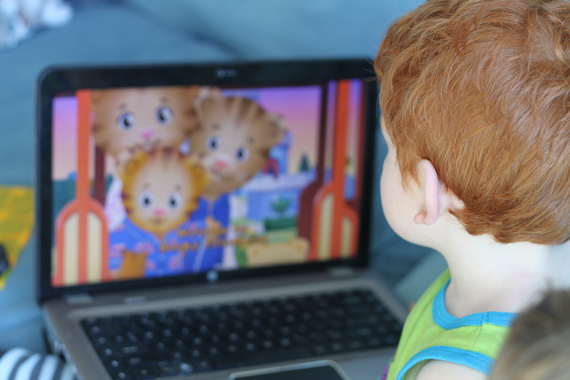 In "Beyond 'Turn It Off': How To Advise Families on Media Use," Drs. Brown, Shifrin, and Hill offer a handful of suggestions for families already using screens such as: "Prioritize how your child spends his time rather than just setting a timer." These helpful hints -- though the primary content of the text -- aren't the main cause of parental commotion.

The hubbub surrounds the article's title and a few seemingly loaded lines. For example, after citing the guidelines established in 1999, the authors state: "[S]cientific research and policy statements lag behind the pace of digital innovation." They also write, "In a world where 'screen time' is becoming simply 'time,' our policies must evolve or become obsolete." Which leaves some parents popping the bubbly and others asking: what exactly does that mean?

Much of parenting young children has an aspirational quality to it. "We don't say things just to hurt other people's feelings," I interject into my six-year-old's dispute with my son, "it's better to be kind than to be right." Ten minutes later, I land a solid zinger on my own younger brother, pointing out his hypocrisy in a way that confirms my superiority without advancing our conversation. "We use our words, not our hands," I then say, as I pull my fighting kids apart with brute force.

But I don't stop setting lofty goals because I know neither I nor they will completely meet them. I don't let my fear of seeming like an old lady who doesn't understand the real world keep me from establishing ideals.

Parents turn to the AAP for best practices based on scientifically informed, reasoned judgment. Two rationales support the AAP's existing guidelines. First, despite the fact that -- as John Medina, author of Brain Rules for Baby, summarized in 2013: "Very little high quality research has been done in the area" -- there is some direct evidence that screen time is harmful for kids' development. Second, TV watching displaces more interactive behaviors that are proven to be better for healthy growth, such as reading with adults, self-directed play, and physical activity. It's hard to see how increasing use of screens undermines either of these two original concerns.

Let's consider a physical health analog. The AAP recommends that children be offered water rather than soda or juice, since sugary drinks have been linked to poor diet quality and obesity. This is true both because refined sugar itself isn't ideal dietarily and because kids who fill up with sugar eat fewer vegetables. But Harvard researchers report that children in the U.S. consumed an average of 224 calories per day from sugary beverages from 1999 to 2004. A recent article in the Journal of the Academy of Nutrition and Dietetics says that American kids still imbibe about 10% of their daily calories in sugar-sweetened sodas. Yet the AAP hasn't changed its guidelines to meet this reality.

"Beyond 'Turn It Off'" says, "The public needs to know that the Academy's advice is science-driven, not based merely on the precautionary principle." This statement would seem to suggest that the initial restrictions were issued too early based on sparse evidence of harmfulness and a better-safe-than-sorry rationale. But the authors' remark about obsolescence forebodes another rush to judgment. A reactive swing in the opposite direction.

We, like our kids, need an angel sitting on our shoulder, reminding us what's best, especially when it's inconvenient or counter-impulsive. Parents need a parent, an organization that's willing to preach what's right, despite being considered unhip.

If the latest science shows that screen time is not detrimental, because we know more now or the screens kids are using have changed for the better, it makes sense to amend the guidelines. Believe me, I'll waste no time in joining the parental ticker tape parade.

But if the most well-conducted studies available at the 2016 conference instead support the unpopular guidelines, let's hope the AAP stands firm.

In the meantime, I'll continue allowing the current recommendations to guilt me into acknowledging my own internal voice--the one that knows my kids are better off scraping sticks through the dirt than watching a TV show, even our beloved Daniel Tiger's Neighborhood.

More:
american academy of pediatricsDaniel Tiger's NeighborhoodParents tvscreen time
Newsletter Sign Up
Raise the kind of person you'd like to know
Subscribe to our parenting newsletter.
Successfully Subscribed!
Realness delivered to your inbox