We've all had a bad breakup...or four. But we don't really think relationships get any crazier in real life than they have in some classic and contemporary literature.

Take "Gone Girl"'s Amy and Nick. Would you want to date either of them? We didn't think so.

From Oedipus and Jocasta to Anastasia and Christian Grey, here are the most dysfunctional book couples. Trust us, these people will make you feel good about your worst relationship.

Who are your favorite dysfunctional literary couples? Let us know in the comments!

Charles Ryder + Sebastian Flyte ("Brideshead Revisited")
Some people don't think Ryder and Flyte were romantically involved (we think those people are stupid). Flyte was a crazy alcoholic, Ryder was an obsessive social climber. Flyte also never seems to reconcile his strict Catholicism with his sexuality. He is extremely depressed and reclusive. And then throw in the fact that it wasn't socially acceptable to be gay back then: a relationship doomed before it even began.

Heathcliff + Catherine ("Wuthering Heights")
Well, this starts out really great. They're childhood friends who can't bear to spend any time apart. But then Catherine becomes super genteel and Heathcliff is, well, not. And then Catherine gets married to someone else because Heathlciff is not good enough (status-wise) for her. Heathcliff is devastated, and runs away. He ALSO marries someone else , and comes back to Wuthering Heights (probably to spite Catherine. Who knows?). Then Catherine DIES. But don't worry; she's not totally gone. She's just a ghost now.

Jake Barnes + Brett Ashley ("The Sun Also Rises")
Trust Hemingway to write a f*cked up relationship. Jake is impotent, Brett doesn't love anything more than she loves sex. He is hopelessly devoted to her, but she can't help flirting and bedding every handsome man she sees.

Humbert Humbert + Lolita ("Lolita")
Um, do we need to mention anything more than the age difference and the fact that he's technically her guardian?

Macbeth + Lady Macbeth ("Macbeth")
You know what they say: the couple that murders together...oh, wait. No one says that. The Macbeths have one thing in common: they sure are power hungry. Unfortunately, that doesn't keep them together. After they kill the king, Macbeth is killed and Lady Macbeth goes crazy.

Jaime + Cersei ("Song of Ice and Fire" series)
Well, they ARE brother and sister, so there's that. But also, they're both super evil. They push a child out a window so he doesn't confess that he saw them having sex. That's pretty messed up (we realize that Jaime is a pretty dynamic character and changes a lot to be not-so-evil, but he sure is a "bad boy" at the beginning).

Anastasia + Christian Grey ("Fifty Shades of Grey")
There is S&M, and there's abuse. It's difficult to categorize the "Fifty Shades" relationship, but since Anastasia admits that she's afraid of the guy, and ends up leaving him eventually, and he seems like a creepy, gross stalker for most of the books, we're leaning towards the latter for this. When someone is young and immature enough to say "Geez" constantly and they've never even kissed a boy before, they're probably not ready to make the decision of entering into a dom/sub relationship.

Howard Roark+Dominique Francon ("The Fountainhead")
Well, he does rape her, even though it's sort of not rape, but it really actually is rape. Also, they are both totally in love with each other, yet they never date and they both marry other people, and just constantly f*ck with each other until the end of the book.

Raskolnikov + Sonya ("Crime and Punishment")
While their relationship is, in fact, chaste, Raskolnikov remains a murderer and Sonya is a prostitute. We don't really see that working out. Though they are extremely close, Raskolnikov hides the fact that he's a murderer from Sonya for a long time. In a way, this story ends up with a happy ending sort of (Sonya follows Raskolnikov to Siberia where is imprisoned and begins to heal him with her love), but we still think it starts off pretty messed up (but we do give them props for working things out).

Hester Prynn + Arthur Dimmesdale ("The Scarlet Letter")
Arthur knocks Hester up. However, he's a priest and they're unmarried (actually, Hester is married to someone else entirely, but he's not in town). Hester is forced to bear the shame of having someone else's child out of wedlock, and doesn't turn Dimmesdale in. Dimmesdale doesn't confess until the very end of the book, after which he dies in Hester's arms.

Oedipus + Jocasta ("Oedipus")
Oedipus kills his father and marries his mother. Upon learning that they have done this, Jocasta kills herself and Oedipus gouges his eyes out. Yikes.

Odysseus + Penelope ("The Odyssey")
We know that misogyny used to be a lot more in fashion, but we still have difficulty with some of the stuff in this classic epic. Odysseus bangs just about every woman he meets on his journey (a man has his NEEDS), but upon finding out that there are all these suitors at his home, he freaks out, wondering if his wife has been faithful (dude has been gone for about a million years). We think Penelope could have done better (although Odysseus pretty much killed all the competition, so there wouldn't have really been anyone left for her to date).

Nick + Amy ("Gone Girl")
SPOILER ALERT (DO NOT READ ON IF YOU HAVE NOT YET READ "GONE GIRL"): Amy is a deranged psycho (oh, also a heartless killer) and Nick is a womanizing, cheating, jerk. It's hard to say which of these characters is worse.

Dorothea + Edward Casaubon ("Middlemarch")
He is way older than her, but she thinks he's an intellectual and hopes to be stimulated by how smart he is, so she marries him. She soon finds out that he doesn't think too much of her ambitions. She realizes he isn't all that smart, and he's also a super jealous guy. When she forms a close friendship with his cousin, Casaubon forbids the cousin from entering the house. When Casaubon eventually dies, his will states that Dorothea loses her inheritance should she marry the cousin. 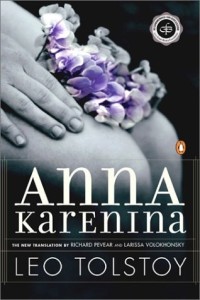 Anna + Karenin ("Anna Karenina")
When a book begins with “Happy families are all alike; every unhappy family is unhappy in its own way," you know you're going to have a lot of dysfunction going on.The book is about Anna's loud, public affair with Vronsky. She tells her husband openly that she doesn't love him close to the beginning of the book. She is pretty much a train wreck (pardon our metaphor), and things do not end well for the couple (or for Anna).