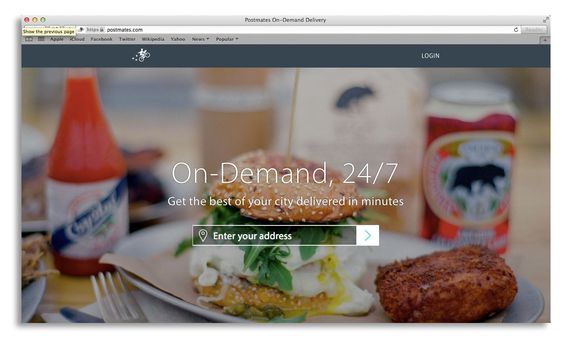 "Do you know the Poulterer's, in the next street but one, at the corner?" Scrooge inquired.

"I should hope I did," replied the lad.

"An intelligent boy!" said Scrooge. "A remarkable boy! Do you know whether they've sold the prize Turkey that was hanging up there - Not the little prize Turkey: the big one?"

"What, the one as big as me?" returned the boy.

"What a delightful boy!" said Scrooge. "It's a pleasure to talk to him. Yes, my buck."

"It's hanging there now," replied the boy.

And so Charles Dickens, in his timeless holiday classic, A Christmas Carol, informs us of the Delivery on Demand Service of his era...and uses it to bring the entire story home.

Perhaps that "intelligent boy...remarkable boy...delightful boy" was a direct precursor to Instacart, Saucey, Drizly or Thirstie, perhaps even to Deliv or Amazon Flex...

If you are still with me... I thought who better to skewer one of the most heinous digibabble obfuscations of our time -- instant delivery -- than Dickens... And when better to do it than during "holiday" time?

In fact... it's not just delivery now that is a canard... it is the way analysts and investors and the companies themselves approach the entire notion of delivery -- as if somehow "digital" has erased all costs and logistics from the profit equation. Or that our packages are somehow transported to us via the cloud...

To put it in perspective, according to the Financial Times, "The cost of getting packages to customers' doors has been rising relative to sales, reaching 12 per cent of net sales in the most recent quarter," and as best as can be understood, Amazon loses over a billion dollars a quarter to shipping costs. Amazon loses an estimated $1 billion to $2 billion on Prime shipping annually, the Harvard Business Review reported, citing Forrester Research. That is up to 11 times more than the $178 million in operating income that the company reported for fiscal 2014. And please don't talk about the cloud here -- we get that....

Quick Delivery, Instant Delivery, Overnight Delivery, Personal Delivery are not new concepts created by apps and cloud connectivity (although they do help fuel them). They are as old as human need and have often been way more profitable and efficient than they are today.

As I started with Dickens, let me continue with a little British Delivery history... because the system in the United States was based on it... and, readers from elsewhere, forgive my parochialism but the points are universal...

And, most importantly, I think you will find parallel comparisons to today's world that I believe will help us to bring reality and better ideas to the problems of delivering today.

According to one study of the U.S. Postal Service:

The early American colonists inherited the tradition of government postal monopoly from Britain. In sixteenth-century England, the Tudor monarch outlawed private post in order to hinder communication between potentially rebellious subjects [think of today]. Later, the monopoly was justified as a revenue raiser for the Crown. But even 270 years ago, private carriers were breaking the law and providing the public with better service than the government:

In 1709, Charles Povey used bell ringers to collect letters, which he delivered anywhere in London for a halfpenny. The Post Office prosecuted Povey, who was convicted and fined, and then it adopted his system for the government service.

As the United States grew and as cities flourished, the government monopoly did little or nothing to innovate until "Henry Wells (later of Wells-Fargo fame) entered the market, charged 6 cents a letter, and delivered faster. In the Boston area alone, over a hundred private express companies carried the mail. Private companies delivered letters directly to addressees' homes, while the government still required people to pick up their mail at the nearest post office."

And it gets better and more interesting with language and ideas that could come out of a current start-up's playbook:

In March 1860, William H. Russell and two partners formed the Central Overland California and Pike's Peak Express Company. Russell had repeatedly tried to gain government backing to set up a 2000-mile express mail route from St. Joseph, Missouri, to Sacramento, California, but Congress was not interested. Russell and partners set up relay stations, hired "young, skinny, wiry fellows not over 18 . . . willing to risk death daily" (as the newspaper help-wanted ad declared), and quickly narrowed the communication gap between east and west [emphasis added]. The first privately carried Pony Express route delivered the mail between St. Joseph and Sacramento in 10 1/2 days - less than half the time of the Post Office's route. It took the Post Office over a year to admit that the Pony Express had a better idea and to begin contracting with the private company to expedite government mail.

The Romans, way back when, knew the value of "highways" for good communication, and Clipper ships, trains and planes took off in good part because of the need for better, faster and cheaper delivery routes for goods and services.

And then the Internet rolls along.

The assumption was that instant ordering required instant gratification - so as the notion of it having to be there yesterday grew, FedEx stock shot up...and then people realized how much extra they were paying... two- and three-day delivery became the norm and the FedEx great innovation of that time was FedEx Ground Delivery... while they and others reassessed the Postal Service which owned the "last mile" that is the actual trek to the person's home.

At about the same time as FedEx discovered that having to pay drove a different set of behavior, Kozmo went live: "During the first Internet boom, startups like Kozmo.com became ubiquitous in New York as employees with purple messenger bags fanned out to deliver snacks and household goods. But it didn't make money, went bust, and became a cautionary tale for the future."

Clearly GPS and other technology make it a bit easier today, but it's still a people- and place-intensive undertaking... big cost and someone has to bear it.

And bear it they will...Barney's department store in New York will deliver same day for an added cost of $25, and in the UK, Argos offers a similar service with various options.

Uber is in the game as are a slew of start-ups, stores, services and plain old people.

And of course Amazon tops the list with the desire to "disrupt" yet again...

None of this is true Digital disruption... not even close. In fact, it's not even true Retail disruption... at best it's evolution... or reapplication of time-tested and sadly forgotten truths... that it's people who shop, want convenience, look for value, need choice, require confidence and demand ease of purchase and return.

I recommend that you read the Sears Wish Book cover of the 1890s and compare it to Amazon... also look at the size of the "remote" shopping industry when it was difficult to get to a store and, even if you could, there was no real selection of goods or value in pricing... do the conversion math - the industry was huge.

Nor is there anything called digital delivery... despite the digibabblists and the analysts looking to monetize yet another market moneymaker for themselves.

Drones? Check out the Dabawallas.

Amazon has just invested in a fleet of trucks...

And in a tribute to Dickens and the power of Christmas, here's a recent story about Amazon:

Bins full of orders move along 14 miles of conveyor belts, but outside, traffic grinds to a halt for miles when more than 4,000 employees are going in and out during rush hour.

The number of Amazon employees is more than double than what was originally approved, Fried said. They work four 10-hour days on two shifts.

"We have a system that was built for a number of cars and it's twice as many cars," he said. "It wasn't built to handle that much volume."

"Most concerning, though, is the accident count has risen 300 percent," he said.

And there you have it... Dickens half-crown is now billion dollars of loss and traffic accidents...

Let me end as I began... with Dickens:

There are books of which the backs and covers are by far the best parts. Charles Dickens

I can think of no better articulation of Digibabble.

And what do you think that "intelligent boy...remarkable boy....delightful boy" would say?


Read more at The Weekly Ramble