The biggest creatures in the sea are big, but surprising new research shows they're not quite as big as we thought.

Maybe that's not surprising, since it's difficult to get accurate dimensions for whale sharks, giant squid, and other "marine megafauna" because they can be hard to find and even harder to weigh and measure once you find them. 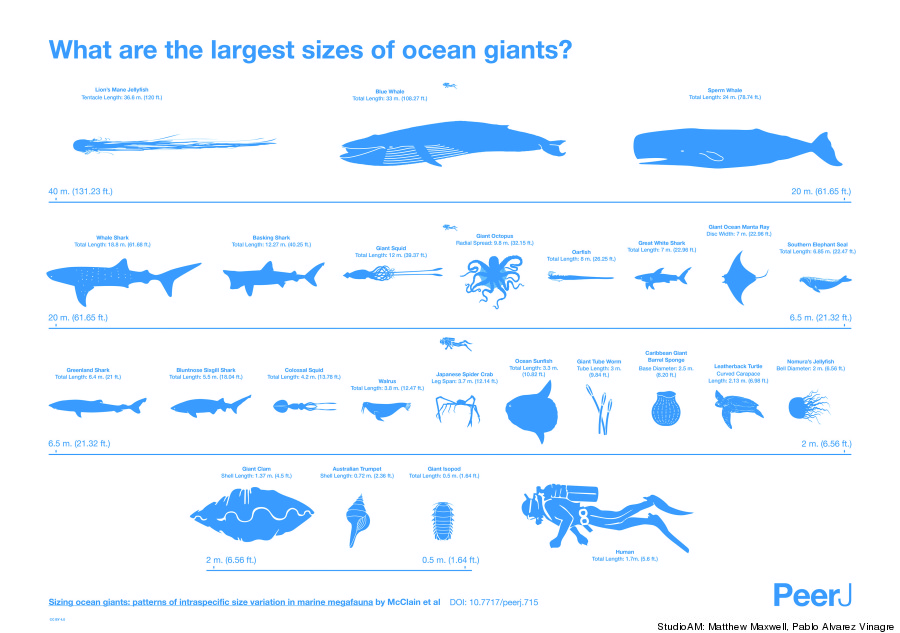 The research project analyzed sizes for storied sea creatures like whales and sharks and for lesser-known giants like tube worms--and the results appear in this chart.

“This is the first time anyone has tried to compile anything like this and will set to rest a whole lot of myths about the size of the largest specimens of all kinds of animals,” Dr. Trevor Branch, an assistant professor of aquatic and fishery sciences at the University of Washington and one of the scientists who conducted the research, said in a written statement. “It’s a massive piece of work, compiling the data.”

The researchers recruited graduate and undergraduate students from across the country to help study 25 marine species, from well-known creatures like the great white shark, giant octopus, and walrus to more obscure creatures like the giant tube worm and the colossal squid. They analyzed historical data and scientific literature, and also examined specimens.

What did the study show? Previous reports slightly overestimated the sizes of many of the larger creatures.

For instance, it was widely believed that the giant squid can reach lengths of about 60 feet, but the new measurements show that 40 feet is more accurate, Live Science reported.

"Precise, accurate, and quantified measurements matter at both a philosophical and pragmatic level," Dr. Craig McClain, assistant director of science for the National Evolutionary Synthesis Center in Durham, N.C., who led the new research, said in the statement. "Saying something is approximately 'this big,' while holding your arms out won't cut it, nor will inflating how large some of these animals are."

A paper describing the research was published in the journal PeerJ on Jan. 13, 2015.