Something fishy is going on in Spain.

Residents of Villaricos were baffled last week, when a strange-looking sea creature washed ashore a beach in the southern coastal town Thursday. The mysterious carcass has been called everything from "horned sea monster" to a "mutant fish."

After a beachgoer reported the unusual find, authorities pulled the remains of the estimated 13-foot creature further onto the beach and cordoned off the area. According to ABC de Sevilla, the carcass exuded a strong odor and appeared to be in a state of decomposition.

María Sánchez, the civil protection coordinator for nearby Cuevas del Almanzora, speculated that mysterious marine animal may have washed in from somewhere near Africa.

"It has the shape of a snake," she described to ABC. "It's similar to a dragonfish that allegedly comes from Africa and could have been dragged by the current." 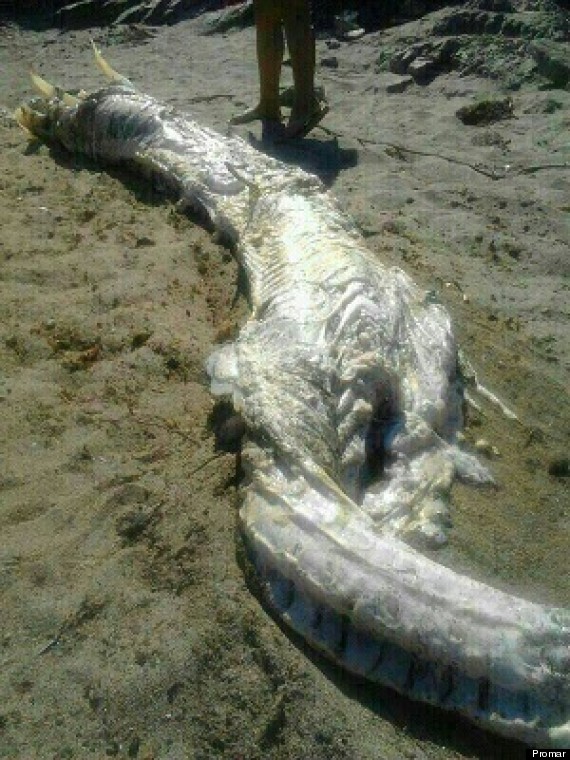 On Monday, the Association in Defense of Marine Fauna announced that experts are trying to identify the creature but have yet to present any concrete data, daily newspaper Ideal reports.

Gary Griggs, the director of the University of California Santa Cruz's Institute of Marine Sciences, offered his own explanation for the bizarre find.

"Based on my vast experience as an ichthyologist, this looks like a ribbon fish or oarfish," Griggs told The Huffington Post, adding that the family of elongated fish have been mistaken for sea serpents in the past. After all, the longest oarfish recorded measured in at 36 feet.

Oarfish are rarely seen alive since they reside far below the surface in temperate and tropical waters. A remote undersea vehicle recently managed to capture footage of the long, bony fish swimming in the Gulf of Mexico, however most are not spotted until their carcasses wash ashore.

"Everyone loves stories of dragons or sea serpents, and although this looks pretty bizarre, I don't think this is one," Griggs told HuffPost.