LOS ANGELES, May 23 (Reuters) - A sea lion that became streaked with petroleum from an oil spill on California's Santa Barbara coastline this week has died after being taken to SeaWorld in San Diego to be cleaned and treated, officials said on Saturday.

Up to 2,500 barrels (105,000 gallons) of crude petroleum gushed onto San Refugio State Beach and into the Pacific Ocean about 20 miles (32 km) west of Santa Barbara on Tuesday when an underground pipeline that runs along the coastal highway burst.

The spill left a number of birds and marine mammals streaked with petroleum.

The sea lion was found with petroleum on its coat and was shipped on Thursday to SeaWorld San Diego, a theme park with an oiled wildlife care center, to be cared for and cleaned.

The mammal was in critical condition when it arrived. A rescue team washed oil off its coat and hydrated it, but the sea lion died early on Saturday, SeaWorld said in a statement.

"It's always very saddening to our rescue team when an animal doesn't make it and often the situation is that the animal is past the point of being able to recover," said SeaWorld spokesman Dave Koontz.

A necropsy is planned to determine the cause of death, according to SeaWorld.

So far, two dolphins without visible signs of petroleum exposure have been found dead, Settle said, as have five petroleum-streaked pelicans and 50 invertebrates.

Another surviving sea lion and an elephant seal were shipped to SeaWorld on Friday for recuperation, according to the park.

Separately, wildlife workers have managed to keep alive nine pelicans and one western grebe that were streaked with oil, said Ashley Settle, a spokeswoman for the joint-agency command for cleanup and recovery.

The full extent of the toll on wildlife has not been determined, and experts fear the oiled birds and marine mammals found to date may represent only the tip of a potential calamity.

Plains All American Pipeline LP, the owner of the oil pipeline that burst, must take numerous corrective measures, including an in-depth analysis of factors contributing to the spill and a plan to fix any flaws found before they can restart the line, U.S. safety officials said on Friday.

The spill was the largest to hit the ecologically sensitive shoreline northwest of Los Angeles since a massive 1969 blowout dumped up to 100,000 barrels into the Santa Barbara Channel. (Reporting by Alex Dobuzinskis, editing by G Crosse) 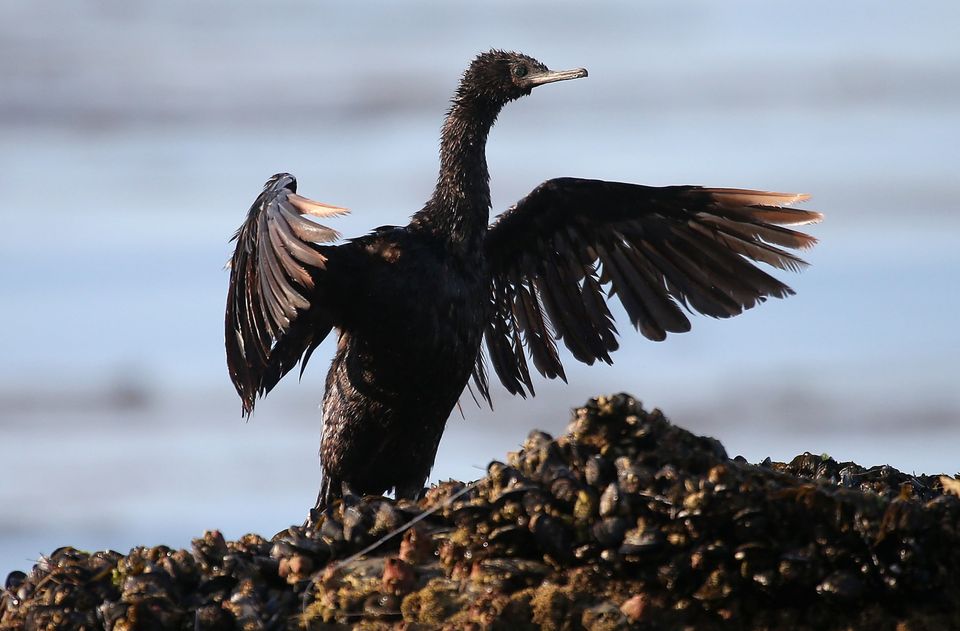 1 / 28
California Declares State Of Emergency As Oil Spill Harms Pristine Coastline
GOLETA, CA - MAY 22: A bird covered in oil spreads its wings as it sits on a rock near Refugio State Beach on May 22, 2015 in Goleta, California. California Gov. Jerry Brown declared a State of Emergency after over 100,000 gallons of oil spilled from an abandoned pipeline on the land near Refugio State Beach, spreading over about nine miles of beach within hours. The largest oil spill ever in U.S. waters at the time occurred in the same section of the coast in 1969 where numerous offshore oil platforms can be seen, giving birth to the modern American environmental movement. (Photo by Justin Sullivan/Getty Images)
Justin Sullivan via Getty Images