In Star Wars, The galaxy desperately needs heroes who can restore balance to the Force - from Luke Skywalker to the new heroine, Rey, in Episode VII. In the world of conservation biology, a similar quest is underway to find species who can restore the balance to the forces of nature where they are deteriorating. One such hero is the Pacific Coast sea otter. We all know the sea otter as the charismatic and cuddly creature that frolics in the kelp beds around Monterey Bay. But it turns out these top predators can balance out entire ecosystems - for the good of nature and humanity too. To find out more about these marine Jedi, I interviewed Dr. Brent Hughes, who studies their impact on the California coast:

Question 1: How would you describe the estuaries you study in the Pacific northeast? What makes them "out of balance?"

Answer: Like many coastal ecosystems around the world, estuaries (where the land meets the sea), are under threat from humans. Estuaries are often tightly coupled to the land surrounding them, so what happens on land usually ends up in coastal waters. These coastal areas, if dominated by an agriculture or urban landscape, often suffer from the ill effects of pollution, specifically nutrients from fertilizer or sewage runoff. This can lead over enrichment of nutrients in coastal waters, causing lots of bad effects, such as algal blooms, lowered oxygen in the water, fish kills, biodiversity loss, and the decline of important habitats such as seagrasses and salt marshes. Once this balance has been shifted to an unfavorable state it can be really challenging to get it back to its ideal state. This presents a problem for both managers who are tasked with maintaining the integrity of healthy coastal ecosystems. It also affects humans because of the many benefits we receive from coastal ecosystems, which include shoreline protection from storms and sea level rise, food from important fisheries, buffering of land-based contaminants before they reach the ocean, and overall aesthetics. 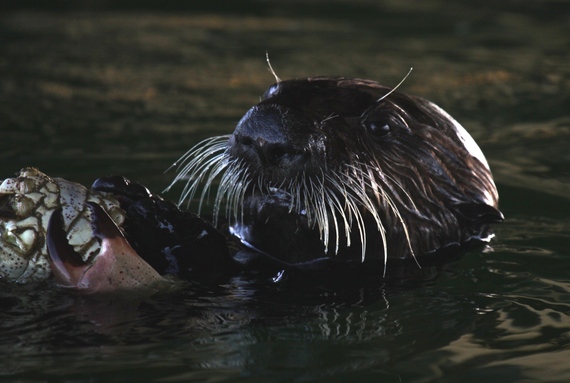 The Face of a Marine Jedi: The otter up close. (Photo Credit: Lilian Carswell).

Answer: The first changes we see when sea otters enter a new coastal system is that there are declines in their prey populations. These prey items include urchins, crabs, and clams. Sea otters are voracious predators and they need to eat a lot to maintain their core body temperature. Unlike most marine mammals, otters do not have blubber, so they need to consume about 25% (20 to 25 lbs) of their body weight each day just to stay alive. This can translate into a large amount of their prey removed from the ecosystem. For example, one sea otter can consume 10,000+ large crabs per year. Because their prey, like crabs and sea urchins, can also have large effects on ecosystems, sea otters can indirectly impact plants and animals lower on the food chain, a process that's known as a "trophic cascade". In estuaries we are discovering that through their healthy appetites, sea otters can protect and help restore valuable ecosystems, including seagrasses and salt marshes, which can be degraded by an overabundance of crabs. For seagrasses, sea otters remove crabs, which frees up tiny invertebrate animals that consume algae growing on seagrass leading to healthier seagrass. In the marsh, sea otters remove crabs that would otherwise burrow in the marsh and eat its roots, which destabilizes the marsh. So, in essence, sea otters are Jedi that can restore the balance to one small part of our galaxy. 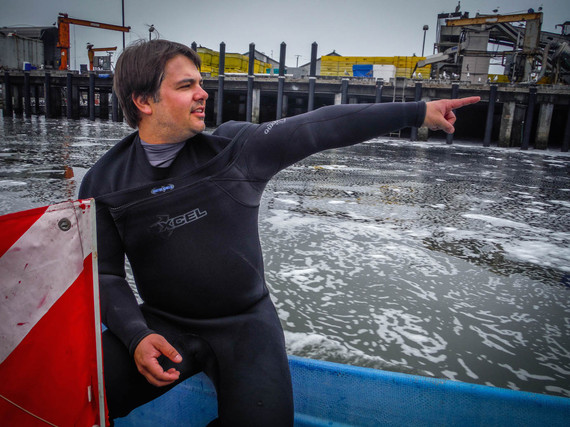 Dr. Brent Hughes on the way to work

Question 3: What's preventing the expansion of sea otters in California?

Answer: This has been a question that has frustrated conservation practitioners for a while. One reason for slow expansion is simply sea otter behavior: female otters are home bodies, spending their lives within a fairly small home range, and that means that the expansion of the population along the California coast has always been fairly slow. Another more recent reason for a lack of range expansion has been an increase in great white shark predation at both the southern and northern ends of the range. We call this the "great white shark gauntlet".

We can't change great white shark behavior, sharks are going to be sharks. However, we are exploring unique strategies to speed up the recovery of sea otters, which means looking into areas where their predators aren't. Estuaries are the most likely candidate system, where we know great white sharks seldom enter and sea otters can add many positive benefits to estuarine ecosystems. They will be able to perform their Jedi tasks.

Answer: This is the million dollar question. Sea otters need to eat a lot, and they also have an expensive palate. Meaning they eat a lot of the same things we humans eat: crab, abalone, clams, mussels, etc. This presents a perceived conflict with fisheries and recovery of a top predator. This is also not the first time predator recovery has been a contentious issue, a good analogy for this is the grey wolf reintroduction to Yellowstone National Park. However, there is a silver lining with sea otters and humans.

Sea otters have co-existed with all of their prey for millions of years. Meaning they have never driven their prey to extinction. Native Americans, who once hunted sea otters, also co-existed with them for millennia. So there is potential for sea otters and some fisheries to co-exist, even thrive; however, fishermen and conservation practitioners will need to work together to better prepare for sea otter recovery. Certain fisheries are not compatible with sea otter recovery, but other fisheries actually benefit from the ecosystem changes brought about by sea otters. So balance, the benefits the sea otters bring, may well be worth fisheries welcoming otters back. This is a key question for our research.

Question 5: Is there anything people can do to get involved?

Answer: Yes, on a local scale, California citizens can directly help fund sea otter research and conservation by purchasing "Whale Tail" license plates. From a much broader perspective, citizens can go out and volunteer on restoration projects and citizen scientist programs. We environmental scientists are usually operating on a shoestring budget, so we actually depend on the local community to help plant native species, collect water samples for water quality monitoring, and even collect ecological data. A big success story in this movement has been through the Christmas Bird Count, where every Christmas day citizens go out and count birds and this turns into data that is valuable for bird conservation.

In my own research I often incorporate students and volunteers in helping with data collection and without them we would know a lot less about the role of sea otters in coastal ecosystems. We live in an age of environmental peril. While we have created most of the problems, it would be a mistake to think we can solve them all on our own. Species like the sea otter can be our allies. We can work together to restore the balance.