They're calling it a sea serpent, but whatever it is that raised its head and humps in a Norwegian lake, the eyewitnesses are holding fast to their story.

Three men on a trip to Lake Hornindalsvatnet saw something strange break the surface of the lake on Aug. 1.

"We saw what we saw, no doubt about it," Andreas Solvik told NRK.no.

Two of the men snapped a picture on their cell phones of something that appears to have a head and two arch-like sections of a possible long neck and body.

The thing they saw on the lake is similar to early sea serpent reports, like the one in the illustration, below right, from a 1639 encounter off Cape Ann, Mass. 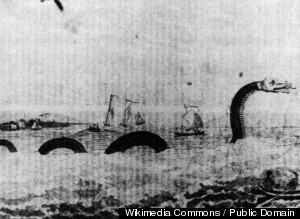 It's not the first time that a serpent has been rumored to live in Hornindalsvatnet, which, at 514 meters, is the deepest lake in Europe.

Solvik and his two friends, Finn Nyhammer and Arvid Otterdal, were familiar with the local sea serpent tales, but hadn't figured on seeing it themselves.

"I have lived beside the lake for 50 years, and have spent a fair amount of hours on the lake. I have never seen anything like this before," said Solvik.

"We sped up and went over to where it had been. It was maybe 70 meters away," Solvik added. "But when we got there, there was nothing left to see, only small ripples in the water. There wasn't anything floating in the water."

The three men reject that what they saw was either eels or cable, according to the newspaper Fjordingen.

The eyewitnesses reported their creature sighting to Fjordingen's editor, Bengt Flaten, who told NRK.no that he had no reason to doubt their story.

"We see two arcs and we see the tail at the back and what must be the head in the other end," Flaten said. "The pictures don't lie. There was something that moved in the water."

This serpent tale comes on the heels of an alleged sighting of Scotland's legendary Loch Ness Monster, in which a sailor recently produced a photograph he took last year of the creature he's reportedly spent almost three decades looking for.

Here are more reported lake creatures and other strange beasties.