Last week (October 2013) Captain Paul Watson, founder of Sea Shepherd Conservation Society came home to the U.S. after 15 months at Sea (mostly off the Australian Great Barrier Reef) avoiding Interpol Red Notices by Costa Rica and Japan. It's an extraordinary maritime story about an intrepid eco-warrior - who since 1977 has been involved in direct-action protecting the endangered whales from 'The War Against Nature.'

In May of 2012 whilst visiting Germany on route to the Cannes Film Festival, Costa Rica issued a Red Notice for Watson with the intention of handing him over to Japan. Watson skipped bail, making his way through the Netherlands onto the sea, eventually joining the Sea Shepherd fleet in the Southern Ocean to prevent Japan from slaughtering endangered whales in the Antarctic sanctuary.

Sea Shepherd has saved 5,000 whales in the Southern Ocean Sanctuary from the lethal Japanese harpoons. Incidentally, Japan sells its Antarctic whale meat for $250,000 a head - do the math - that's $1.25 billion that Sea Shepherd has denied the Japanese government. Is it any small wonder why Japan is after Captain Paul Watson?

In the weeks ahead we can expect a ruling from the International Court of Justice in The Hague where Australia argued that Japan's claim to be hunting whales in the Great Southern Ocean for scientific purposes is spurious.

Here's an except from my forthcoming book Shepherding the Sea: "Japan's 'scientific whale research' is overtly flawed. If, in fact, they were testing a hypothesis then their factory boat the Nisshin Maru's reaction to harassment by the Sea Shepherd ships during the 2012-13 whaling season would have ended the research sampling for that season. Instead, the Nisshin Maru fled, followed by one of its catcher boats, to the other side of the Antarctic continent, thousands of kilometers from its designated research area where it resumed harvesting piked whales. A real research program is based upon systematic, pre-planned sampling in a designated area within a designated time frame. Japan's 'lethal research' of rorqual whales in the Antarctic has nothing to do with 'scientific research.'"

Not only are they driving all cetaceans (whales and dolphins) to extinction, quickly but also according to Elsa Nature Conservancy, Japan "The government of Japan's stubborn reluctance to relinquish this archaic industry is not only driving marine species to extinction, but endangering the health of its people."

Furthermore, Japan is capturing dolphins and selling them for as much as $175,000 to dolphinariums burgeoning in China. This is animal cruelty of the highest magnitude and an unimaginable sentence for these sentient remarkable creatures. Just go and see the documentary Blackfish.

I recently had the pleasure of spending the morning with Jeff Hansen, Director of Sea Shepherd Australia at the Los Angeles International Airport (LAX) as he passed through on route to Seattle to defend Captain Paul Watson and Sea Shepherd USA against a SLAPP - a Strategic Lawsuit Against Public Participation - a civil suit launched by the Japanese whalers. 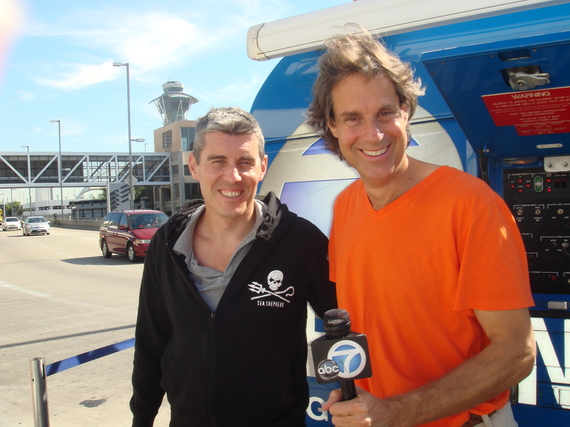 The Ninth District Court, Seattle will examine non-Americans on Dutch-registered vessels operating out of Australian ports in international waters.

Watson says "Our tactics are non-violent - always have been and in 40 years of operating, I've never caused a single injury to anyone."

"Yes we are aggressive but we're non-violent and we only intervene against illegal activities, intervening but making sure that nobody is injured."

"They (Japan) can call us all the names they want but in today's modern world if you boycott something you're suddenly a terrorist."

"They've taken the meaning out of the word and trivialized it and that's certainly unfortunate for all those who have been victims of real terrorism in the world."

Watson will challenge Japan's Red Notice in the U.S. if required.

Former Australian Green's leader and Chairman of Board of Sea Shepherd Australia Dr Bob Brown, whose is also in Seattle at the Ninth District Court this week, and Jeff Hansen will run 'Operation Relentless' the tenth consecutive year Sea Shepherd has protected the endangered whales in the Southern Ocean Sanctuary.

Over the past 200 years humans have massacred five million whales; there's no more than three percent of the great whales remaining. My colleagues have clearly shown that toothed whales cull the old and weak prey preventing diseases from becoming epidemics, and filter feeding or baleen whales fertilize the oceans with their flocculent fecal plumes stimulating phytoplankton thereby enhancing fisheries. It is time now to grant amnesty to all whales and dolphins and end the rapacious global hunt by every remaining country i.e Japan, Norway, Iceland and Danish Faroe Islanders.

"The War Against Nature" has turned into a prolonged global looting spree. The oceans are dying, rapidly. And as Captain Paul Watson has sagaciously warned "If the whales die, we die."

I, for one, love this planet and under no circumstances will sit idly whilst Japan blatantly plunders endangered whales, dolphins, porpoises and other sealife because they exert a sense of entitlement and a largess bank account.

The oceans in fact belong to the commons. And whether you realize it or not Sea Shepherd is playing a pivotal role in defending your children's birthrights - our oceans; Sea Shepherd is empowered in doing so by the United Nations World Charter for Nature, which by the way all nations including Japan signed in 1982.

Earth Dr Reese Halter is a broadcaster, biologist, educator and author of the forthcoming book 'Shepherding the Sea: The Race to Save Our Oceans.'