Like satire? Find it every day on The Political Garbage Chute.

NEW YORK, NEW YORK -- On his radio show this week Sean Hannity, conservative firebrand and loyal Donald Trump supporter, had a slip of the tongue while discussing what he believed would happen during the first of the alleged billionaire's presidential terms. While ranting to his audience about how he believed the "lame-stream media" would treat Trump, Mr. Hannity used a German word that many associate with one of the most ruthless, murderous dictators in human history. 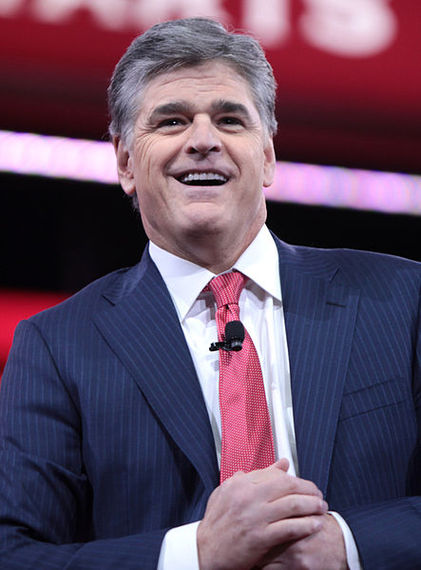 "I just know those loony liberals will be after our dear president from the start," Hannity opined, "and I just do not want them turning him into a one term führer."

Hannity was apparently unaware he'd used the word "führer," a term that has become most synonymous with German dictator and winner of the 1938 prize for Most Mangled Penis, Adolf Hitler. Mr. Hannity continued his rant through to the commercial break. When he returned to the live broadcast, his producers had made him aware of it, and he addressed his use of the word.

"So apparently when I was all hopping mad back there," Hannity said incredulously, "I may have used a German word for Donald. Obviously I don't really think of him as a führer. He's more like president-emperor, know what I mean? He won with the consent of like, 18% of the country's population, which of course gives him a massive mandate. That mandate will allow him to do pretty much whatever he wants, what with a Republican Congress and whatnot."

Mr. Hannity told his audience that it would be "absolutely disastrous" for the American people if Trump was limited to one term.

"How does anyone expect any of his final solutions to our problems to work," Hannity asked, "if we don't repeal the 22nd Amendment and give him as many terms as he wants until his arteries finally give out on him and he dies in a heap of orange diarrhea?"

As the show progressed, Hannity kept coming back to his slip of the tongue, and each time he found more reasons to excuse it. Ultimately, he decided that since there wasn't any direct mention in the word's definition to the Nazis, that it was "another case of libtards being libtarded about libtarded things."

"And what's so wrong about me calling him my führer," Hannity asked rhetorically, "look up the definition, liberals, it just means 'a ruthless, tyrannical dictator.' It doesn't say anything about having to be a Nazi. Duh."