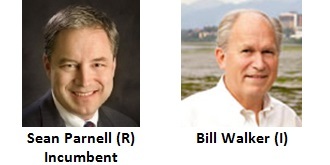 Are you looking for a nonpartisan voter guide to the Sean Parnell vs. Bill Walker Governor's race? One that will give you an unbiased, no-spin comparison of candidate positions on key issues? That's what our Campus Election Engagement Project guide will give you! We are a national nonpartisan initiative working with college and university administrators, faculty, and student leaders to increase student participation in America's elections. For the 2014 elections we have created and distributed voter guides to campuses in more than 20 states so they can provide their communities with accurate information for informed voting. Because these guides have been so well received and are useful for all voting citizens who want to be better informed, we are also posting them here.

We developed our guides by analyzing information from trusted resources such as www.votesmart.org, www.ontheissues.org, www.ballotpedia.com, www.politifact.com, www.factcheck.org, www.vote411.org and from candidate websites, public debates and interviews, and statements in major media outlets. We also showed them to groups like campus Young Republicans and Young Democrats at the schools we work with to verify their fairness and lack of bias.

So here are the issue-by-issue stands for Sean Parnell and Bill Walker, with additional links at the bottom for each candidate if you'd like to dig deeper. (You can also find Alaska's Senate guide here.)

----------
Education: Do you support increasing funding for K-12 education?
Parnell: Includes it as priority but record of past cuts makes position contested. (Promotes K-12 funding, but has record of past cuts and his 2014 education funding focuses most heavily on charter and residential schools.)
Walker: Conditional yes (Increased school funding is a top priority, but won't make funding guarantees until Alaska's deficit is reduced.)

Education: Do you support providing vouchers to parents to send their children to private schools with public money?
Parnell: Yes
Walker: No

Environment: Do you support taking government action to limit the levels of greenhouse gasses in the atmosphere?
Parnell: No
Walker: Position unclear

Environment: Do you support government mandates and/or subsidies for renewable energy?
Parnell: Priority on development of oil and gas but has supported setting state renewable energy goals
Walker: All of the above approach. Supports local renewable energy projects while expanding gas and oil extraction and a pipeline for natural gas. (Only as part of comprehensive strategy supporting multiple types of energy development. No special focus on renewable energy.)

Environment: Do you support Measure 4, limiting Bristol Bay mining if determined to be harmful to wild salmon?
Parnell: No
Walker: Yes

Gay Marriage: Do you support gay marriage?
Parnell: No
Walker: No but would uphold amended Alaska constitution to allow gay marriage if that occurs. (See Parnell rivals weigh in on same-sex-marriage)

Healthcare: Should your state accept federal funds so Medicaid will cover people earning up to 138% of the federal poverty line?
Parnell: No
Walker: Yes--because Alaska taxes pay for this. (Walker would accept the Medicaid expansion, with the caveat of continued federal funding, because Alaskans' federal tax dollars pay for it. For more information, click here)

Marijuana: Do you support efforts to decriminalize and/or legalize marijuana?
Parnell: No
Walker: No

Social Issues: Should abortion be highly restricted?
Parnell: Yes
Walker: Ambiguous--wouldn't promote restrictions but wouldn't automatically veto. (Will neither introduce nor promote legislation that increases current restrictions, but would consider signing more restrictive legislation if such a bill is passed during his tenure. See No automatic vetoes of abortion restrictions for more detail.)

Social Issues: Should employers be able to withhold contraceptive coverage from employees if they disagree with it morally?
Parnell: Yes
Walker: Unknown

Taxes: Have you signed the Americans for Tax Reform Pledge to oppose any tax increases to raise revenue? (The answer to this question is taken from the database of signatories of the Taxpayer Protection Pledge, created by Americans for Tax Reform. Signers to the pledge promise to oppose "any and all tax increases" meant to generate additional revenue.)
Parnell: Yes
Walker: No

Taxes: Did you support lowering of oil company royalties to state in Ballot Measure 1 earlier this year?
Parnell: Yes
Walker: No

-----------------
Other gubernatorial candidates include Carolyn Clift (Libertarian) and J.R Myers (Constitution Party). Due to limited space, we can't include their positions, but invite you to check out their websites.