The 2015 Oscars were filled with uplifting stories, calls to action for ALS and Alzheimer's and a powerful reminder of the civil rights movement. But Sean Penn's comment, right before announcing the Best Picture award at Sunday night's ceremony, may have undone it all.

As he prepared to announce Alejandro González Iñárritu's "Birdman" as the film of the year, Penn made a reference to the Mexican director's immigration status.

“Who gave this son of a bitch his green card?" Penn said right before announcing the winner.

Twitter went into a frenzy, as users denounced what the actor likely thought was a joke. Many said the comment was "insensitive" to the plight of many immigrants in the United States and "racist."

*no one acknowledges Sean Penn being straight up racist*

A GREEN CARD JOKE.#OSCARSSOWHITE I AM SO DONE WITH YOU #Oscars2015

That "Green Card" quip was microcosmic of everything everyone hates about privileged folk who adopt the struggles of underprivileged folk.

Others, like Fusion's Mariana Atencio and Entertainment Weekly's Nina Terrero, pointed out that the comment promoted Latino stereotypes because none of the British actors in attendance were questioned about their immigration status.

And yet nobody asked Eddie Redmayne who gave him his green card...#Iñarritu #Oscars2015

BTW, I'm still waiting for the green card jokes on Eddie Redmayne or any of the other Brits in attendance at tonight's #Oscars

"Who gave this guy a green card?" Sean Penn talking about a Mexican dude to a room full of British & Australian people... 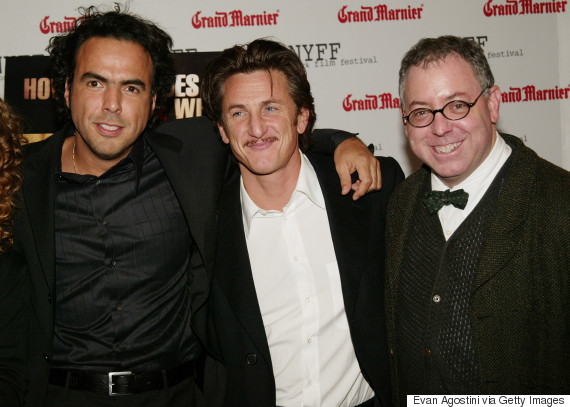 Director Alejandro González Iñárritu and actor Sean Penn in 2003 at a premiere for "21 Grams."

González Iñárritu, who worked with Penn in the film "21 Grams," went on to give an inspiring acceptance speech and dedicated his award to Mexicans and Mexican-Americans. The director's final words during the ceremony were quite timely:

I want to dedicate this award for my fellow Mexicans, the ones who live in Mexico," González Iñárritu said. "I pray that we can find and build the government that we deserve. And the ones that live in this country, who are part of the latest generation of immigrants in this country, I just pray that they can be treated with the same dignity and respect of the ones who came before and built this incredible immigrant nation.

Earlier in the evening, González Iñárritu became only the second Latin American to win the Oscar for Best Director, one year after his close friend Alfonso Cuarón won for "Gravity." "Birdman" won a total of four Oscars on Sunday night.

Editor's Note: This post has been updated to add González Iñárritu's response to Penn's remark.