Yoro, a New York-based artist also known as Hula, was thrust into the spotlight this summer after his hyperrealistic portraits of women over grim waterways went viral.

Yoro paints while floating on a stand-up paddleboard, using anchors and rope to steady himself. But his newest canvas added another challenge to the process. Yoro chose a melting iceberg, broken off from a nearby glacier, "to ignite a sense of urgency," he explained on his website.

Iceland's rapidly melting icebergs lose an average of 11 billion tons of ice every year, causing much of the island's land to "rebound" or move upward at an accelerated rate, according to a January study by the University of Arizona.

Yoro says his portrait represents "the millions of people in need of our help who are already being affected from the rising sea levels" brought on by climate change. He calls this mural "Aʻo ʻAna," which, according to Yoro, means "The Warning" in Hawaiian.

Yoro spent a little more than a week scouting locations, hiking for miles and finding creative ways to get his paint on the icy canvas floating in the sea.

"Once I had the final idea and concept in place, I felt I had to find a way to bring this piece to life," Yoro told The Huffington Post. "I knew the piece would not be as powerful if it weren't for the specific locations and placement."

To prepare, Yoro used a power drill to mount thin acrylic sheets (similar to plexiglass) onto the ice. Once they were fastened, he painted directly on the sheets from his board, completing his eight-foot long portrait in late October. He estimates that the ice will have melted away or broken up in just a few weeks, at which point the acrylic sheets will be retrieved.

"Just in the short week I was there," he explained to CNN, "the icebergs all around me were constantly cracking and flipping."

Yoro told HuffPost that, oftentimes, "humans don't respond unless we actually see the danger." His childhood in Hawaii, he says, taught him to respect the land. "I felt the need to use my work in order to inspire positive change in society," he explained.

PHOTO GALLERY
13 Beautiful Mosaics Around The World
Download
Calling all HuffPost superfans!
Sign up for membership to become a founding member and help shape HuffPost's next chapter
Join HuffPost 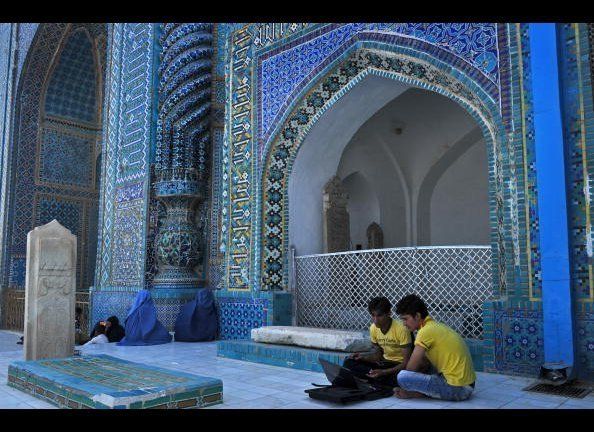