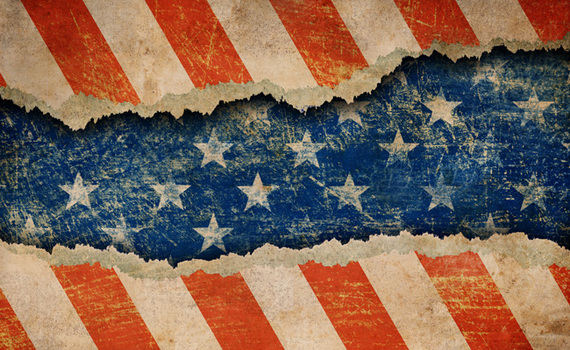 The essay I wrote on February 22, 2016 and posted via my Facebook page has gone viral and has been read by over 1 million people in more than 140 countries. Amazing! But more surprising is the number of encouraging comments from people who see the deeply divided state of our country as the real threat to our nation and our culture. I only intended to speak for myself yet somehow gave voice to many. Sort of like a 21st century digital ventriloquist.

The most unexpected outcome of the popularity of my essay is that I have been given the opportunity to share my scribblings with a much wider audience thanks to The Huffington Post. It is my sincere hope that this platform will allow me to challenge, educate, and inspire people across the political spectrum, our country, and even the world.

I plan to take each of the 21 points in the original essay and expound on them separately in a series of essays. But before I begin, I think it is important to give you sense of how I came to the place I am at politically, ethically, and in my faith.

Over the past ten years I have undergone a radical transformation in my political ideology from a staunch Conservative Republican to a moderate Progressive Democrat. The process was slow, difficult at times, and was shocking to many of my friends and family. When I say I was a staunch Conservative, I'm talking Archie Bunker, "kill all the commies", trickle-down, rugged individualist, "if you don't like it here, then go back to where you came from", flag waving, gun-toting patriot warrior. I believed Liberals wanted to take my money and give it to some welfare queen puffing on a Kool and eating steak and lobster paid for with food stamps. Ronald Reagan was the greatest president since George Washington and Oliver North was just a misunderstood patriot following orders.

Then something happened that shifted the tectonic plates of my soul and conscience. I became a Christian. You can read about that here in detail, but suffice it to say, my life was utterly and completely changed.

As I delved into the faith more, my daily bible reading started to uncover a profound cognitive dissonance in my life. On the one hand Jesus was telling me to love my enemies, but on the other I was sure all Muslims deserved to die. The bible says care for the poor, widowed, abandoned, and hungry, yet I was sure there were tons of people defrauding our welfare system every day. It made my head hurt and grieved my spirit.

Over a period of three or fours years I found it increasingly difficult to defend my positions on much of what I believed to be true about our nation. The most profound change came after reading The Myth of a Christian Nation: How the Quest for Political Power Is Destroying the Church, by Gregory A. Boyd. It was the brick through the window of my crystal palace of righteousness and certitude. Boyd's words and the scripture he presented shattered my political philosophy and drove me to my ideological knees.

I realized that my first and most important citizenship and allegiance as a follower of Jesus Christ is to the Kingdom of God, not to a political party, secular ideology, or even the United States of America. It also showed me that what I thought was our rich and proud Judeo-Christian heritage was really a false secular religion that substitutes faith in government for reliance on God. This and so much more reshaped my entire ethic and challenged me to dig deeper into scripture to find a way to live a fully integrated life--spiritually, politically, ideologically, and rationally.

It is from this place--this new country of harmonized faith and ethic that I write to you from. Sometimes I feel like an alien visiting a strange world. Other times, I find myself edging back toward old views like reaching for a soft, old flannel on a chilly winter day.

My purpose in all of this is not to necessarily make you agree with anything I believe or say. Rather, I want to challenge you to seriously examine what you believe--especially if you are a person of faith. Does your political ideology align with your faith? Can you defend the things you believe about how we relate to government, its role in our lives, our responsibilities as citizens, and our cultural identity in the face of your holy scripture (whatever that scripture might be)? And for those of you who practice no particular faith or have none at all...can you harmonize your ideology with the universal moral truths of the human race?

This is the question I will explore through the lens of 21 topics over the next few months. I encourage an open and frank dialogue. Share these essays with as many people as you can. Perhaps if we all are honest and do our part with integrity, we can learn, grow, and find the soul of America together.

LaMonte is an author, missionary, and business consultant who lives Chicago, Illinois. When he is not writing science fiction novels or helping his clients, you can find him serving the people along the Amazon River in Brazil. You can learn more about his work at www.lamontemfowler.com.

A version of this post originally appeared on LamonteMFowler.com.