As I watch the Arab Spring, I recognize the road ahead will be long and difficult. While many Arabs are calling for democracy, the region continues to lack democrats, a key component for any political, cultural and social revolution.

Two years ago I interviewed Khaled AlMajali, director of the Jordanian correctional facilities for a story on prison reform. He mentioned the difficulties he faced in persuading officers that the notorious prison system needed reform and that it was not only necessary but also noble. "Every time there is change, there is struggle and resistance," explained AlMajali. "Otherwise it is not really change."

I never grasped the significance of his struggle until today. The Arab Spring, though too early to judge, will not succeed without simultaneously working on creating social democrats if we want to see a more prosperous, pluralistic and promising Middle East.

I realize many Arabs across the region watched in awe and supported vehemently young Arabs peacefully protesting against injustice. For several days and weeks, it seemed like the whole Arab world was united; our way of life and political systems were no longer tolerable.

Although political systems remain to be the core problem, the education system, economic divide, cultural outlook and even social relationships need to be examined as we look forward. Going to the ballot is meaningless without transparent and policy-based elections. As we have learned, it is not enough for Iraqis to show a purple index finger to the cameras or for Arabs to vote in rigged and tribal elections.

I grew up in Jordan always thinking that comprehensive reform was in fact the only way a country can survive and become part of the international community. I now know, like AlMajali, that not everyone believes in reform.

Arab governments have continued to enforce a system of education that praises rote learning and memorization rather than analysis and critical thinking. The key to change, explains Marwan Muasher of the Carnegie Endowment, is reforming an education system dependent on obedience and one that views pluralism and diversity as a threat.

Governments have prevented non-governmental organizations and community leaders from becoming politically active and powerful, fearing their own demise. They have also prevented the press, through direct and indirect means, to act as a watchdog.

Ironically, these were all political steps taken by Arab governments to prevent the very thing we are witnessing today.

In the aftermath of the toppling of at least two regimes so far and demonstrations taking place across the region, what do we hope to achieve? What kind of society do we want to live in? What role will religion play in the already religious judicial system? Do we want to truly embrace democracy?

Democracy is a way of life. Social democrats understand and respect an individual's rights while simultaneously recognizing the concept of citizenship. Until we begin the fundamental process of creating a 'culture' of choice, ownership, leadership, critical thinking and creativity, we will not succeed in achieving comprehensive reform. 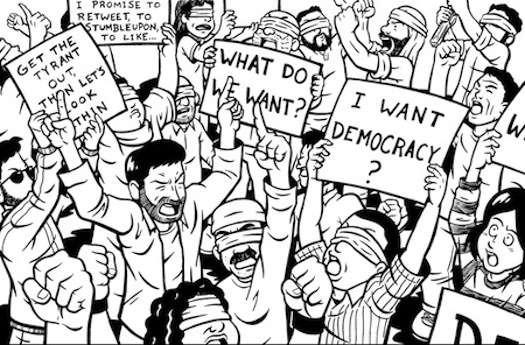