In August 2010, I came to the conclusion that I knew nothing about a place I had idolized since childhood.

I was standing on the balcony of the Ottoman palace-turned Marriott Hotel in Cairo's affluent Zamalek district when it happened. It was the last day of my family's triennial trip to Egypt, where both my parents were born and raised, and I had stepped out onto the balcony for a moment alone. As I watched the glow of the sun kiss everything from satellite dishes on apartment rooftops to the tips of sailboats navigating the river Nile, I realized that something was missing.

All my life I had considered myself just as Egyptian as I was American; my dad had always said I was a perfect mix of the best of both cultures. But as I stood there, watching the wrinkles of the Nile pulse northward, I realized that Egypt was a place I knew embarrassingly little about. My Arabic was accented, my time there was restricted to visiting tourist sites and lounging at relatives' apartments in upscale parts of town, and the thought of jumping in a taxi on my own made me shudder with discomfort.

During the 18 days, I watched the events unfold from my swanky apartment in Arlington, Virginia, calling family regularly, glued to every live update.

Egyptian food, music, television shows and movies, and the Egyptian dialect had played an integral role in my life since childhood. My mom made traditional kahk cookies every Ramadan, we went to visit our family friend known as Tant Abla on the weekends for dinner parties with other Egyptian families. At home, we watched old Abdel Halim and Shadia movies on satellite TV channels. My dad made the traditional foul beans from scratch every Sunday. 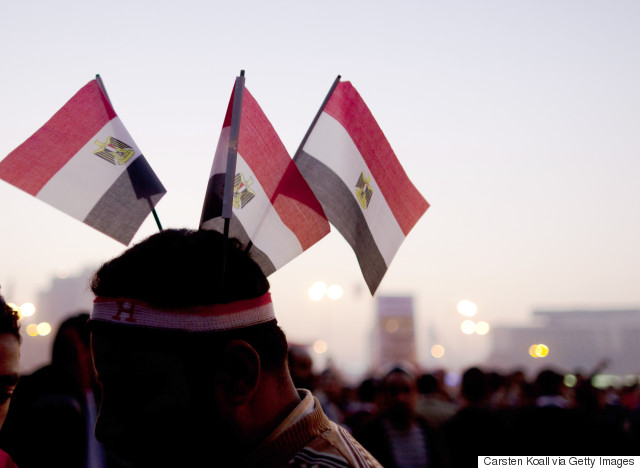 A street vendor wears small Egyptian flags in his head band during a rally at Tahrir Square on February 18, 2011 in Cairo, Egypt. (Carsten Koall/Getty Images) I don't know if it was these experiences, or just an obsession with where I came from, but my heritage was something I had always worn on my sleeve. Everyone from third grade classmates, to the high school track team, to members of the Student Ambassadors organization I joined in college knew I was Egyptian. My affection for the country was apparent in my choice of school projects, soccer team preferences, and my decision to buy an Egyptian flag off Ebay to drape in my college dorm room.

But standing there in Zamalek, hovering over my dad's hometown, I felt inadequate. The vast majority of my experiences had been overwhelmingly American, and taken place within an American context. I didn't know what it was like to live in Egypt. I wasn't familiar with its arts and literature, or the basics of its modern history. I knew it had problems and I wanted to make it a better place, but I didn't have a realistic sense of its social and economic issues, what it was like to attend the poor government schools my cousins did, or the plight of the millions of its citizens infected with Hepatitis C.

On January 25, 2011, Egyptians piled into Tahrir Square to demand bread, freedom, and social justice. During the 18 days, I watched the events unfold from my swanky apartment in Arlington, Virginia, calling family regularly, glued to every live update.

The revolution excited me because it was a chance for Egypt to reach the potential it deserved. Egypt is a beautiful and well-endowed country, its nickname Um al-Dunya or Mother of the World exemplifies its historical and cultural significance.

Yet over the past 60 years, social and economic problems were rampant, pushing the country closer to becoming a failed state. I blamed much of this failure on the rulers that followed Egypt's 1952 revolution. The dictatorships of Gamal Abdel Nasser, Anwar Sadat, and Hosni Mubarak had collectively failed to provide basic human rights and civil liberties while overseeing a complete lockdown on civil society. They led their citizens and the rest of the world to believe that in Egypt, it was either authoritarianism or political Islam and religious extremism. I believed that this false binary needed to be destroyed so that a secular political system could be formed from scratch and provide an opportunity for civil society to thrive. A secular government anchored in a diverse civil society was the path to Egypt's improvement.

Occupants of the square were not the so called religious extremists calling for Islamic law, they were ordinary people.

This is why the 2011 revolution was so important to me. By January 28, 2011, Egyptians from all walks of life were occupying Tahrir Square: doctors, lawyers, ardent soccer fans known as Ultras, unemployed college graduates educated at top schools, and members of the working class. Occupants of the square were not the so called religious extremists calling for Islamic law, they were ordinary people who were ready to destroy a repressive duality for the sake of their nation's progress.

When Mubarak stepped down and I watched Tahrir Square erupt into euphoria, my body was overcome with chills. I took that same Egyptian flag I had bought during college from above my bed and hung it in our living room. I felt the need to join the revolution and to serve its cause and to learn more about a place I loved while contributing to what I believed to be its best interests.

After the revolution, I spent years figuring out ways to get to Cairo. I applied to scholarships and consultancies and looked for new jobs. Eventually, I realized that to understand Egypt and serve its revolution, I'd have to make a career shift.

Three years later, in January 2014, I arrived in Cairo as part of the final semester of my graduate studies in public policy and international affairs.

My plan was to become a real Egyptian with a real understanding of the revolution. To do this I would have to delve beneath a surface comprised of trips to the pyramids and staying at my Uncle Mohamed's place in Heliopolis, an upscale suburb northeast of Cairo. I would also have to find a way to get involved in Egypt's politics, to learn more about its modern history, and to use this knowledge to have a political impact aligned with the aims of the revolution. 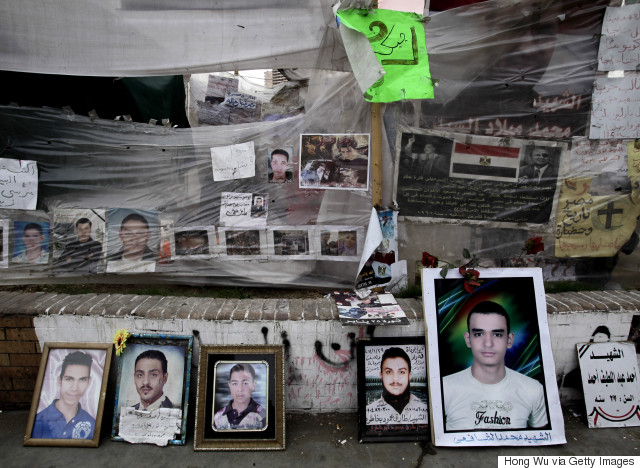 Portraits of protesters killed during the Egyptian revolution are placed in Tahrir Square on March 7, 2013 in Cairo, Egypt. (Hong Wu/Getty Images) Politically, the country was still reeling from a summer of turmoil marked by the military-led ouster of Mohamed Morsi, the massacre of what conservative estimates say were 600 of his supporters at Rabaa Adawiya Square, and the precarious rule of an interim-military backed government led by President of the Supreme Court, Adly Mansour. Brotherhood demonstrations were still taking place en masse every Friday, journalists and activists were being jailed on trumped up charges, and the media was brimming with rhetoric that labeled anyone who opposed the government as a traitor who wanted the country to fall victim to terrorism.

It seemed that all around me, January 25 was being subject to a burial.

A month before I arrived, Ahmed Maher, a leading activist of the 6 April movement -- which played an integral role in the 2011 demonstrations -- was sentenced to three years in prison. The decision was described by his lawyer as "revenge against the revolution." A week later, Al Jazeera journalists Peter Greste, Mohamed Fahmy, and Baher Mohamed were arrested on charges of belonging to a Muslim Brotherhood terror cell.

The environment was disheartening; it was as if I had shown up to the scene of a battle ready to fight, only to find myself surrounded by leftover ashes, skulls, and stray bullets. It seemed that all around me, January 25 was being subject to a burial, and that I would have to work backwards to understand what had happened before I could serve its cause.

A version of this post appeared on The Cairo Review of Global Affairs.