Upon arriving in Greece almost a week ago, the biggest question I had was this: How can Greece, in the midst of a major economic depression, also manage the refugee crises? The answer, it turns out, is that the Greek people - from officials, to everyday residents - have actually handled it pretty well, and appear to be getting better at every turn.

Altogether, I visited six refugee sites in Greece. The last one was the Eleonas camp in Athens. Eleonas is designed to host refugees while they wait out what is likely a six to twelve-month asylum application process.

Refugees are not housed in tents in Eleonas. Gone is the acrid smell which permeated the unofficial refugee site at Idomeni, and there is a state of the art medical unit located here. About 900 residents live in units which look like small trailers, sleep eight, and have bathrooms with showers inside. The army arranged the 110 trailers in orderly rows, and in record time. I asked where they got the prefabricated units. "They were in storage, to be used in case of a major earthquake in Athens," a Greek camp-manager told me. When I joked that she'll have nowhere to go if there's an earthquake, she just laughed, as if it hadn't occurred to her. Soon after, she made a passing mention of her husband. I had already noticed that she was wearing a rainbow pin, the symbol of LGBT pride. This wasn't the first time on my trip that I'd seen a camp official wearing one. I learned that wearing these pins was a way to signal to LGBT refugees that they are safe, and a way to send all residents a message of tolerance in their new home. 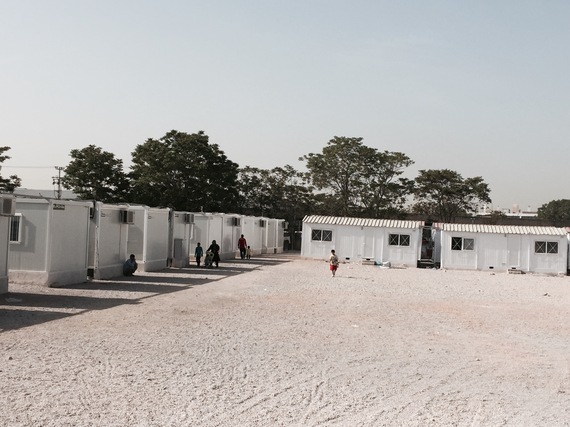 The Greek ministry in charge of the refugee crisis is very proud of the Eleonas site. In fact, the minister himself was on site a few minutes after our tour. Not only are the facilities significantly upgraded from the temporary reception locations, the services are too. Children are starting to go to school, and the neighborhood elementary schools in this area of Athens are making room, and developing special programs for them. There are also education programs for adults, English and Greek are the most popular.

The biggest challenge for refugees in Greece at the moment is the registration process for those seeking asylum. Until the border was closed in Idomeni, just a few weeks ago, very few refugees sought to apply in Greece. They were on their way to Germany, where many had family and friends who had already arrived, and where jobs far more plentiful. Faced with what could be the immediate filing of 50,000 applications, the government is trying to stand up a system overnight. Its not going well. To start the process, they need to sign up via Skype. The system can handle about 100 applications per day, and crashes constantly. In the meantime, the police papers that people receive as they entry the country, which give them legal status for one to six months, depending on where they come from, are starting to expire.

It is worrisome. But overall, the process appears to be grinding to a start, and the biggest challenge is still trying to convince those in unofficial sites - like up in Idomeni on the border - to trust that the system will work, and they should relocate to these organized, longer-term camps where the conditions are much more humane, much more livable.

In the meantime, people continue to work to help the refugees. Everywhere I went I asked about how the Greeks were reacting to the newcomers. Generally, the answer that came back was that they were greeting them with kindness, support and empathy.

One of my Greek cousins told me that over the last year, every single person she knew had made some kind of donation, or helped the refugees in some way. I was surprised to hear her he tie the reaction of the Greek people directly to the economic crisis. "A few years ago we couldn't have imagined having our economy fall apart, and yet it happened. Our world, as we knew it, disappeared. Since the economic crisis started Greeks have had to help each other in ways they never imagined, - giving money to friends and relatives just so they can buy food! I think people really relate to those who are coming. Their situation is much, much worse than our own. But we can understand how it feels, even if on a smaller scale, to have everything taken away."