On August 28, about an hour and half into a two-hour evening gathering at Wellspring Church in Ferguson, Mo., a young African-American woman named Johnetta Elzie took the microphone and spoke with a clear, fearless voice:

I came down because I saw that baby laying on the floor with blood bleeding out of him for four hours," she said. "I came out here because Mike Brown could be my son one day. I don't have children, and I hope that no one -- a police officer or any other -- would ever lay my son out and have him four and a half hours on the ground. That's why I'm mad, and I'm involved. 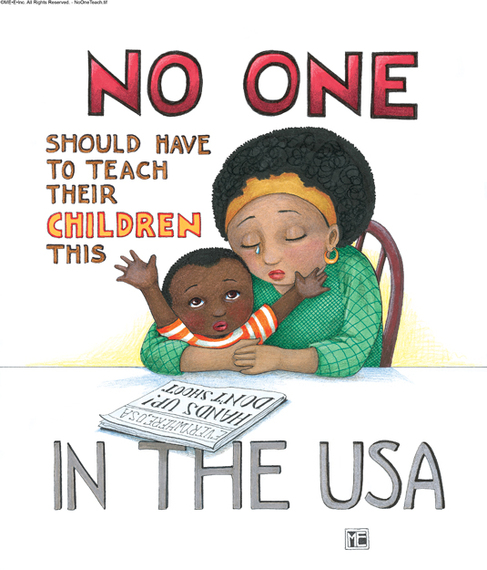 Illustration by Mary Engelbreit. Copyright 2014, All Rights Reserved. Used with permission of the artist.

The forum at Wellspring was one of countless discussions, demonstrations, protests, meetings and rallies that have flashed across the St. Louis region -- and across the country -- since August 9. That was the day 28-year-old Darren Wilson, a white Ferguson police officer, shot and killed 18-year-old Michael Brown, a black Ferguson resident, in a confrontation on a residential street. Brown did not have a weapon, but there are conflicting accounts of virtually all the other details of the shooting.

The Wellspring event was organized by KWMU, St. Louis' public radio station, and moderated by Michel Martin of National Public Radio. Some 200 people attended, filling all the chairs and all the standing space along the church walls.

Daniel Isom II, a former police chief of the City of St. Louis, a University of Missouri-St. Louis criminology professor and a featured panel member, echoed Elzie's dismay over police treatment of Brown's body in the aftermath of the shooting.

"You've got to acknowledge that that was wrong and that you're sorry for it," he said. "I don't care, under any circumstances, what kind of investigation was going on. A person's body does not lay out in the street for four hours." (On Labor Day, Isom started his new job as director of the Missouri Department of Public Safety, the only cabinet-level African-American in Gov. Jay Nixon's administration.)

It's impossible to know if respectful treatment of Brown's dead body would have changed the course of events. But the police's conduct in those first hours communicated disregard, disdain and contempt for the feelings of area residents and Brown's parents. If nothing else, it surely stoked people's anger over the shooting; later that night, the commercial streets of Ferguson's southeastern corner erupted in violence and looting, and that frightened and angered residents even more.

Nor is there much doubt that law enforcement subsequently provoked the situation further with a militaristic overreaction to its first-night failure to prevent violence. Tear gas and smoke bombs used in an effort to control the streets were, predictably, uncontrollable. The fumes choked and stung peaceful demonstrators and seeped into nearby residences, assaulting men, women and children -- most of them people of color -- in their own homes.

Local and national news organizations have devoted hours of airtime, rolls of newsprint and gigabytes of Internet capacity to coverage of the events in Ferguson -- a lot of it good, some of it appallingly amateurish and a gratifying amount of it excellent and even courageous.

Related stories have explored the deepening poverty and educational disparities of the area and exposed the operations of some municipal courts that trap low-income residents in compounding cycles of fines, fees and jail time, a business model that owes more to the abusive payday loan industry than to the administration of justice.

All due credit to these reports, the stories seem to me to be missing something.

In the film course I've taught at Webster University, I try to help undergraduates look past storylines and identify universal human themes in the movies we watch together in class. The great films have them, which is why those pictures touch us and stay with us.

Being universal, the same human elements resonate just beneath the surface of the Ferguson situation:

People want to feel safe and secure. We need to be wanted and useful and valued, to have a sense of personal worth, a sense that our existence matters somehow. We want a fair chance to improve the quality of our lives, to be respected, to love and be loved.

Whatever the particulars of the Michael Brown shooting, the resentments of African-Americans originate in violations of these universal human needs and longings, violations stretching back generations, some continuing today in all too many places.

So I was drawn to testimonies like Elzie's at Wellspring Church that express universal concerns -- in her case, a would-be mother with a parent's fears.

I was touched by the honest human truths and tough questions of Solomon Alexander's August 20 blog post -- a black man explaining white people's fears of black men and vice-versa and the effects of those fears on people of both colors.

I felt humbled by the human decency of Artez Hurston and Paris Caldwell, African-Americans in their 30s who put themselves in harm's way to minimize conflict between Ferguson demonstrators and police forces and used their bodies to shield people who came to Ferguson to support police officer Darren Wilson.

And I saw universal mother-and-child humanity in an illustration drawn weeks ago by artist Mary Engelbreit that, with her permission, accompanies this column: a beautiful dark-skinned child with his arms upraised, "Hands Up! Don't Shoot" on the front page of a newspaper in front of him and his tearful mother holding her toddler close. The caption: "No one should have to teach their children this in the USA."

It's heartening, to be sure, that more young people seem to see the lies of racism for what they are, but let's not kid ourselves: Racism has been weakened and shamed but not vanquished by progress. At Its core, it still rejects the universal truth that we are all human beings who need and want the same things for ourselves, our families and our fellow humans.

But it will begin with what the physicists call a critical mass: enough of us who recognize, accept and honor our universal humanity to start a chain reaction that will make things right.

(A version of this column originally appeared in the St. Louis Jewish Light.)