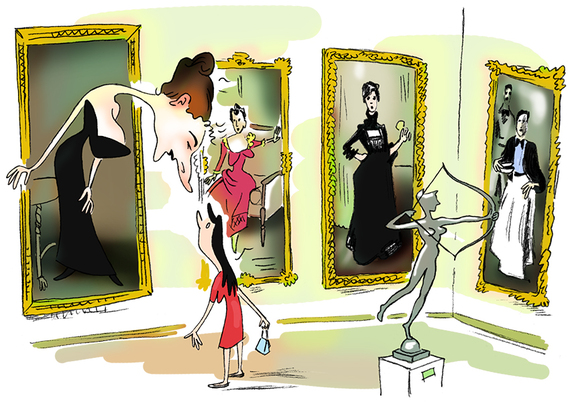 Madame X. In terms of our profiles, I'm told, I look like her. But I'm not so pleased with my profile, so it's with some trepidation I find myself looking for the famous portrait by John Singer Sargent at the Metropolitan Museum of Art in New York. I walk through a room full of painted society ladies of the 19th century. Matrons of the Gilded Age, each one one more refined than the previous. Silk dresses adorned with pearls, lace and voile. Hairstyles bedecked with ribbons and bows. But these ornate and brocaded portraits do little or nothing for me.

Then suddenly I sense her presence nearby. Heads are turning around the gallery, all looking in one direction. "Now there was a woman!" F. Scott Fitzgerald would say. She is in a gilded frame, but she is so real that I take a step backward, as if overwhelmed by her perfume. She does not look at me, but gazes haughtily aside. Her pose gives her distinctive profile full justice. Her nose is by any standard of beauty much too long. But she is a proud woman, even confident, as if she challenges us with her heroic profile. Who are we to disagree?

It almost overwhelms me to take her in at full length. I wonder if I am catching the Stendahl Syndrome, when people become faint while looking at art. But as she looks away from me, I dare to stare. Her breasts, wrapped in black velvet, look unapologetically back at me, bold and fearless. They attack all the more because of her neck -- paler than pale, purplish even. Her ear is dainty, but reddening, suggesting a sexual excitement, her reddish hair pinned up loosely. What makes her stature most erotic is the feeling that there is nothing under her dress, which clings to her hourglass figure. Just pull aside her shoulder strap and she would stand naked.

Madame X was given that name by Sargent, but she is really Virginie Amélie Avegno Gautreau, an American in Paris. When her father, a colonel from New Orleans, was killed in the Civil War, she fled with her mother to France, married a wealthy banker and led a life of opera premieres and society pages. She emphasized her exotic beauty with extravagant dresses, lavender face powder, dyed red hair and ears - the Kim Kardashian of her time. For the novice painter Sargent, she was this "unpaintable beauty," the perfect model to establish his reputation in the Paris Salon of 1884.

But from the outset she ignited a furor. She hung between lush nudes, but her slipping shoulder strap scandalized even the enlightened Parisians. Here stood no safely distant Greek goddess or biblical figure but one of them, without underwear. She had forgotten her chemise, said the society ladies, who must have wanted to protect their men from even seeing this seductive femme fatale.

Her daughter insisted that the painting be immediately removed. Sargent took Madame X back to the safety of his house, and, in a bow to the audience, he painted the naughty shoulder strap neatly back into place. But his name was smeared with gossip. He moved to London, with the painting, and Madame Gautreau became a recluse.

But what a painting! The best that he ever created, as Sargent found for himself when he sold it to the Met in 1916. What's the secret? Is it the blue-white skin, sensuous black velvet dress, bold breasts? No, it is her striking profile. That sharp, almost phallic nose, even more strongly drawn by the painter as if to challenge the viewers to put aside their prudery. She doesn't care; she's above it.

As I leave, i am suddenly full of energy. I pass Augustus Saint-Gaudens' sculpture of a nude Diana, itself once criticized by a puritanical Victorian public. I walk down the stairs with my head high. 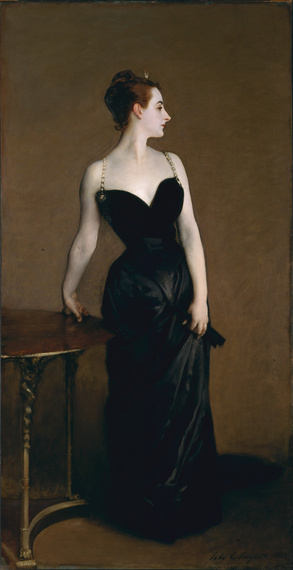