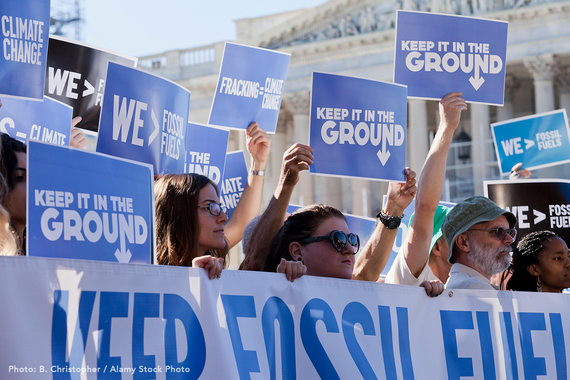 We are building the movement to stop catastrophic climate change: the Keep It in the Ground movement. All over the country, people are rising up against Fossil Fuel Empires to protect our public areas and climate from a legacy of destruction and climate disruption. Together, we're sending a message to President Obama that time is running short, but he can still define his climate legacy by stopping the sale of fossil fuels on public lands and waters and keeping them in the ground.

Over the past week, thousands around the globe have stood against some of the world's most dangerous fossil fuel projects as part of Break Free from Fossil Fuels 2016. Break Free from Fossil Fuels is a global wave of resistance to keep coal, oil and gas in the ground and to accelerate the just transition to 100 percent renewable energy. On May 15, in Washington, D.C., more than a thousand people will join this wave as they gather in front of the White House to demand an end to offshore drilling. Just two months after President Obama acknowledged the need to move away from the dirty fuels of the past, his administration announced a plan to open millions of new acres in the Arctic Ocean and Gulf of Mexico for oil and gas exploration and development. The 2017-2022 offshore drilling plan is the wrong direction for the health and safety of our communities, wildlife, environment and climate. It undermines the president's commitment to address global warming.

The Arctic Ocean and the Gulf Coast are the literal front lines of fossil fuel destruction and climate disruption. The dirty legacies of Exxon Valdez in Prince William Sound, Alaska and Deepwater Horizon in the Gulf of Mexico will continue for years. Along both coastlines, Indigenous communities are forced to permanently relocate as sea levels rise and the land erodes into the encroaching water. The time of treating our oceans and coastlines as zones to pillage, destroy and sacrifice is over.

On May 15 in Washington, D.C., the people will call on President Obama to use his executive authority to permanently protect our oceans and end new oil and gas leasing. Such executive action would keep up to 62 billion tons of carbon emissions in the ground and make progress toward limiting global warming to less than 1.5 degrees Celsius above pre-industrial levels. Given the dangers of oil spills and the urgent need to combat climate disruption, the federal government should have nothing to do with the dirty business of offshore drilling. Selling these waters that belong to the American people to private companies that only profit from environmental and climate destruction is unconscionable.

The seas may be rising, but so are the people. In less than a year, hundreds of people surrounded the New Orleans Superdome against new leases, and for efforts to restore, heal and defend the Gulf Coast; kayaktivists helped to stop Shell's drilling activities in the Arctic Ocean, and towns and businesses along the mid- and south-Atlantic coast united to keep the Atlantic Ocean out of the 2017-2022 offshore drilling plan. With every victory, we're showing that people power trumps fossil power.

That's why the Break Free from Fossil Fuels week of action is so important for the Keep It in the Ground movement. On May 15, the people will demonstrate their power in front of the White House to make sure President Obama hears their message: Stop offshore drilling! No new leases! Keep fossil fuels in the ground!