An ad that appeared on buses in Seattle was intended to spotlight the wide range of research coming from the Seattle Children’s Research Institute. Instead, it caused outrage in the autistic community. The text, next to an adorable little boy's face, read "Let’s wipe out cancer, diabetes and autism in his lifetime.”

The Seattle Times reports that the ad was removed last Friday. 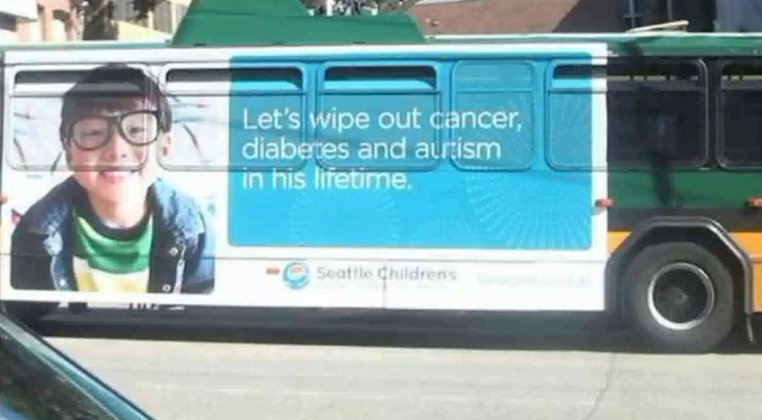 The Autistic Self Advocacy Network protested the ad online claiming that autism should not be compared to or paired with diseases such as cancer and diabetes. “Autism is a disability, but it is not a disease. It is not a life-threatening illness. The idea it’s a state to be wiped out has much negative impact on our lives,” Matt Young, co-leader of ASAN-WA told the Times.

Young explained the issue further in a passionate post on his personal blog that was widely shared on Tumblr. He wrote:


[The ad] may look to you like a simple message of hope, calling for an end to medical conditions that destroy lives. But despite popular opinion, that’s not what autism is. Unlike cancer or diabetes, autism is not a life-threatening condition. Autism itself often enriches lives; it is the fear, desperation and hatred that our culture currently holds for autism that can and does destroy lives.

"Autism is a lifelong disability for us to adapt to, not a medical infection to be overcome with some kind of 'cure,'" he concluded.

However, his opinion isn't shared by everyone in the community. Susan Moffitt of AutismKey.com explains that this incident is part of a larger debate about whether autism should be "cured" or embraced. "Parents of low functioning, self-harming children would do anything to cure their children of autism, while at the high functioning end of the spectrum there is more concern for civil rights and equal opportunity," she wrote this week on the site's blog.

Regardless, Moffitt agrees that the bus ad missed the mark. "Children’s Hospital made a ... gaffe in not respecting the broad spectrum that is autism," she said.

The Seattle Children's Hospital was receptive to the complaints and posted a statement on Facebook. "We are sorry for the hurt and anger these ads have caused – that was never their intent. We at Seattle Children's fully support the autism community, and have therefore made the decision to remove these ads starting next week," it reads, in part.

New versions of the ad will be produced in the next few weeks, the Seattle Times reports .

Correction: An earlier version of the story said that this Tumblr post was written by "another member" of ASAN-WA; it was by co-founder Matt Young.

Facts About Autism
More:
ParentsVideoAutism
Newsletter Sign Up
Raise the kind of person you'd like to know
Subscribe to our parenting newsletter.
Successfully Subscribed!
Realness delivered to your inbox