You might know that the Seattle Seahawks are going to destroy the New England Patriots this Sunday, but despite your fandom for the blue and green, there's probably some trivia you'd like to brush up on about your favorite team.

Especially if you're one of the diehard Twelves, you've got to learn these five things about the Seahawks before they take on the Patriots at Super Bowl XLIX.

Grab some Skittles and keep reading.

1. The logo was based off a real transformation mask made by the regional Kwakwaka’wakw tribe.

The designers for the Seattle Seahawks logo were inspired by native Northwest Coast art, specifically settling on a Kwakwaka’wakw transformation mask. In 2014, Robin K. Wright, Curator of Native American art at the Burke Museum in Washington, wrote an article about the mask which at the time had unknown whereabouts. But Wright's article ended up causing the mask to be rediscovered at the Hudson Museum in Maine, which had not originally been mentioning anything about Seahawk logo inspiration.

The mask's similarities to the Seattle Seahawks logo went unnoticed while at the Hudson Museum because it was always featured in an open position, showing the human face inside rather than the "thunderbird."

Now the mask has been temporarily moved to the Burke Museum in Washington where it is currently on display until July, 2015. Ex-Seahawks star quarterback Jim Zorn was there for the opening celebration. The Huffington Post reached out to Wright about the mask who explained:

It was used as a transformation mask. It's a type of mask that's used by the Kwakwaka’wakw people in their winter ceremony that's called the Tlasula. It's the ceremony where the inherited privileges of the host family are brought out and displayed in the big house in the firelight and the dancer dances the mask around the fire.

To have your family go through this ceremony was a "very prestigious privilege."

The Burke Museum in Washington and Hudson Museum in Maine have a friendly Super Bowl bet over their two home teams. If the Patriots win than the Hudson is getting Seattle crabs and if the Seahawks win Maine lobsters are coming to Washington. "We like to say that the Seahawks haven't lost since the mask came to Seattle," said Wright.

Images provided by the Burke Museum. Image top right was provided to them by the Hudson Museum and image bottom right is originally from the book Art of the Northwest Coast Indians.

2. A Washington resident named Hazel Cooke is credited with naming the team after winning a contest.

Before mentioning anything else, it should probably be said that the football team isn't the first "Seattle Seahawks" to exist in the city. From 1933 to 1941 a hockey team called the Seattle Seahawks played in the North West and Pacific Coast hockey leagues.

Jump a few decades later and the NFL awards an expansion team to Seattle. At this time, the new organization held a contest to name the team and as the Seattle Post-Intelligencer reported, 20,365 entries were submitted with 1,741 different proposed names. Mariners, Evergreens, Olympics and Sockeyes were among those proposed. 151 of those names were for the "Seattle Seahawks."

From those 151 names, the now-called Seattle Seahawks organization drew a name randomly to determine who officially named the team. A woman named Hazel Cooke won and said at the time, "I submitted Seahawks because it’s alliterative with Seattle. And a hawk is proud, bold, fierce. I hope the team will be such." Cooke won two 1976 season tickets

The others who submitted "Seattle Seahawks" also received some prizes. One winner was Deane Brazas who wrote to the Seattle Post-Intelligencer to describe what he got:

In addition to a framed certificate signed by the owners, I received a personalized book about the history of the team, complete with photos and bios of all the original players and owners. In addition, I received two tickets to a preseason game every year until Paul Allen bought the team.

3. The "Legion of Boom" all started with an innocuous comment about dieting by Kam Chancellor. 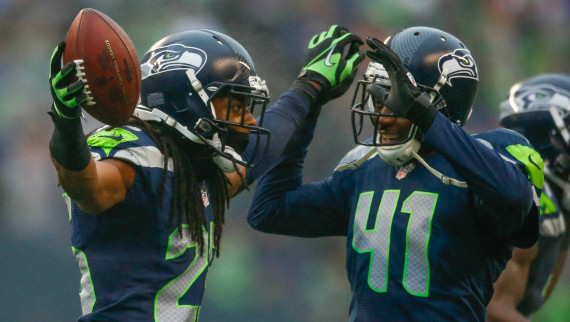 The origin of this phrase is considered a bit of a mystery, but here's what seems to be the most likely backstory.

Kam Chancellor was guesting on “The Bob and Groz Show” in August, 2012 when he simply said, "I changed my diet up, just eating a lot cleaner, just eating chicken, fish, vegetables, fruit, trying to stay light to where I can run fast, but also still have a little weight to keep that boom."

This mention of keeping up "that boom" took off as around that time the show was looking for suggestions of what to call the Seahawks backfield. Later in October, 2013 Chancellor was back on "The Bob and Groz Show" to give them credit saying:

The first surviving tweet from that first August 2012 was made by @realjoedurfee and said, "#Seahawks secondary is now called The Legion Of Boom. I kinda like it." HuffPost reached out to Joe asking where he'd first heard the "Legion of Doom" and he said it was "just something that someone had suggested and I guess it stuck." Joe said he heard it on 710 ESPN Seattle, the station that plays "The Bob and Groz Show."

4. The first ever player to be drafted by the Seahawks was almost one of their greatest of all time, but then got an injury after one season.

Defensive tackle Steve Niehaus was the first person chosen by the Seattle Seahawks and the second overall in the 1976 draft. Occasionally he is thrown into a list of terrible draft choices, but this isn't quite what happened.

In this first year with the Seahawks, Niehaus notched 9.5 sacks which still stands as a team-high total. By the end of the year he'd also received the NFC Defensive Rookie of the Year award. Niehaus was on pace to be one of the defensive greats.

Unfortunately, Niehaus' arm just wouldn't hold up. As Seattle Times writer Danny O'Neil described, "Niehaus would lie there and twitch and wait for someone to reset the joint." That would be after the arm came out of his socket, regularly. Occasionally Niehaus would even use a leather strap to keep his arm in his side and still play football. When Niehaus finally had a major operation on the arm however, he was done and had to quit the game. It's too bad this first Seahawk found out what happened when you fly too close to the Sun. 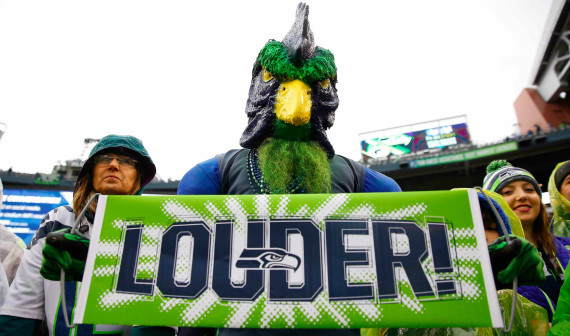 The Marshawn Lynch 67-yard touchdown "Beast Quake" run in 2011 was noticed by John Vidale, director of the Pacific Northwest Seismic Network, who on a whim discovered that a seismic monitoring station about 100 yards west of Qwest Field had recorded a magnitude somewhere between 1 and 3.

The 12th man did it again during the 2015 playoffs when Kam Chancellor returned an interception against the Carolina Panthers for 90-yard touchdown run.

And then a "dance quake" was reported to have occurred by ESPN after the win against the Green Bay Packers to advance to the 2015 Super Bowl. The University of Washington's Steve Malone said that this dance quake was the biggest seismic signal Seahawks fans had ever created. If only the Super Bowl was a home game!

With all this ground-shaking activity, seismic sensors have actually been installed at CenturyLink Field to monitor further earthquakes caused by Seahawks fans.

BONUS: The "12th Man" is so loud that it's close to ear rupturing. No other crowd causes more false starts.

The Twelves have gotten up to 137.6 decibels, which is just about 12 decibels from what it takes to rupture an eardrum.

Because of this extremely loud crowd, ever since the team started recording opposing team false starts at home games in 2005, the Seahawks have led the league.

In 2006, when the team was still at Qwest Field the Giants GM Ernie Accorsi complained to the league that the Seahawks might be blasting additional crowd noise out of their speakers. This was found to be completely false, Seattle fans are really just that loud. 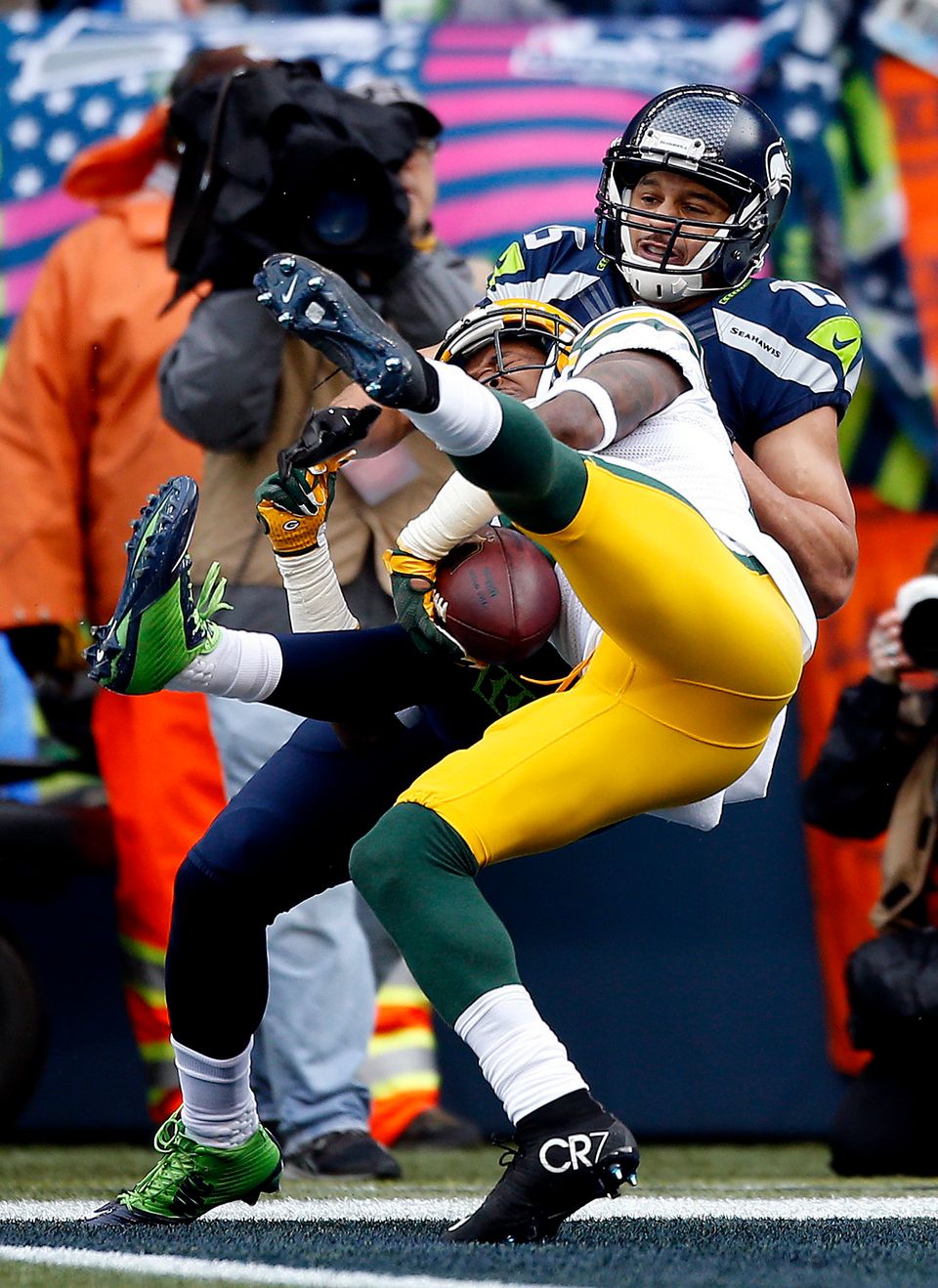