Seattle Shakespeare Company recently premiered The Comedy of Errors at the Leo K Theatre, and the show kept the audience in stitches from beginning to end. I am not much of a Shakespeare fan, and I usually study the plot beforehand just so I can follow what's going on. 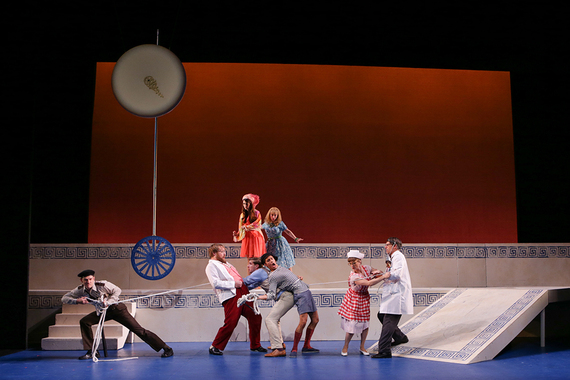 I do enjoy the poetry of the verse, but without doing any pre-play study, I generally find the plots confusing. Not so with this production of The Comedy of Errors. It was brilliantly done in a way even I could understand what was happening without any knowledge beforehand.

And I now have some sense of what my father must have seen when he was a young boy and had the opportunity to watch the Marx Brothers trying out their movies in live theater before they were actually filmed. This version of The Comedy of Errors was like a Marx Brothers show, filled with physical comedy and so much slapstick that I almost expected someone to get a pie in the face. That didn't happen, but characters were constantly barging in and out doors, running around every inch of the stage and bouncing off each other like ping pong balls.

All of this was occurring while the actors articulated every word of the play with eloquence and bravado. The only issue (for diehard Shakespeare fans) was that the audience's laughing often went on for so long that it drowned out parts of the actors' dialogue.