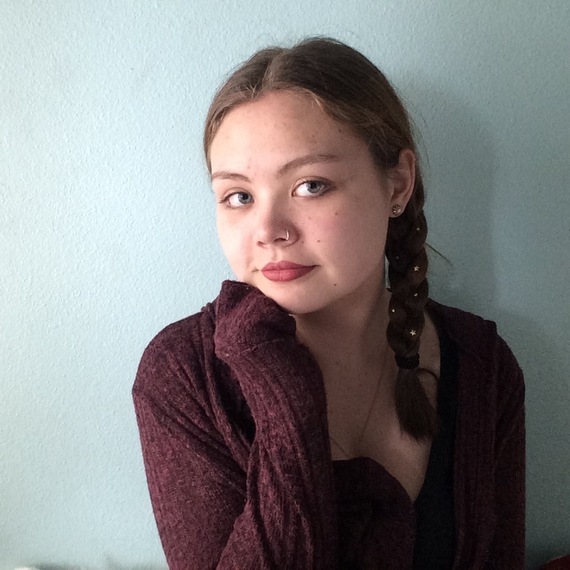 By the luck of the draw and, perhaps, by the grace of God, too, I don't have a teenage abortion to whisper about, let alone shout.

If I did, I secretly wonder if I would be one of those courageous women, sharing their experiences, at #Shoutyourabortion, in an effort to: destigmatize and normalize abortion; emphasize Women's Rights; and, amongst other things, rid the world of, what is now known, crudely (in younger circles), as "slut shaming." More on that later. Either way, that's a tall order.

One such modern-day maverick, Aja Dailey, 17, took it one step further. She'll elaborate on her right to choose -- a decision she made without regret or shame -- for her 2016 Senior Class Project, at Center High School, in Seattle, WA.

Imagine sharing that kind of "Weekend News" with your teacher and classmates? Or your parents?

But first these digressions.

As for me, I have an audio/visual snapshot forever embedded in my mind, from when my teenage sister had an illegal abortion, in 1969, when I was ten years old. I recall a lot of screaming, and my sister sobbing uncontrollably, followed by our front screen-door slamming, and my petite mom, trying to hold back my overprotective, 6'5" dad, from leaving. He was armed with a wooden bat (from his Army/Navy All Star baseball days), along with a seeming seething desire to do physical harm to my sister's boyfriend, A.K.A. "that little bastard." "It's eight hundred, damned dollars down the drain!" he bleated, as he sped away. This behavior was quite the contrast to the week before, when I was showing off for the neighborhood boys of how I could switch hit, and I blasted a baseball through our front window, and smashed it to bits. "Just you wait until your dad gets home!" my mom, admonished. Instead, I got a big hug. "I always wanted a baseball player in the family," he said, tenderly. I just never knew it would be my little darling, Tebbie Lynn."

On January 22, 2016, I attended "It's Our RIGHT: 43 Years of Legal Abortion," a celebration of the landmark decision of Roe v. Wade -- whereby abortion was deemed a fundamental right under the United States Constitution. The event was hosted by Planned Parenthood of the Great Northwest and the Hawaiian Islands, and the Seattle-based organization, #ShoutYourAbortion. My goal? Find ways to get the conversation going -- particularly with teenagers -- about the significance of it all, and write a parenting article about it. But, I walked away with so much more.

I confess. I was nervous as I approached the double doors of this 600-strong, sold-out event at a former Christ Scientist church, turned Seattle Town Hall. I considered inviting my eldest sister, but feared a somber, if not violent, scene. Police and security guards were ever present, including, as I was told, undercover cops. I still quickly noted where were all the nearest illuminated exit signs. However, once inside this brightly lit, Roman-revival style building, with its six, two-story columns, art glass windows and a central dome, I felt like I was on a Hollywood movie set of the Hunger Games, surrounded by legions of beautiful, strong-willed and strong-bodied Katnisses, religiously fighting against the establishment. Surprisingly, the evening overflowed with the most empowering, uplifting, speeches I've ever heard in my life, from Christine Charbonneau/CEO, Planned Parenthood of the Great Northwest and the Hawaiian Islands; to Marie Logsden/Senior Vice President, Learning and Diversity, Planned Parenthood of the Rocky Mountains; to Lindy West, writer, performer; to Amelia Bonow, activist, writer, and co-founder of #Shoutyourabortion; to ten featured (unprofessional) storytellers, sharing their personal stories.

The first of many cheers, tears and standing ovations, was for the fighting spirit of high school student, Aja Dailey, when Bonow introduced her to the crowd. "She is building a future for others," she said.

Many inspiring speeches of women overcoming unbearable strife, followed. There was an "intersexed" young woman (Definition: "Used for a variety of conditions in which a person is born with reproductive or sexual anatomy that doesn't fit the typical definition of male or female"), born with partially formed testicles, who was devastated by news of her infertility. When she did become pregnant, however, doctors then advised that her body would reject the pregnancy, and it would lead to her death and that of her baby. "I had dreams of having a family," she said. "Now there are those who want me dead [for terminating my pregnancy]." Another woman, convinced she was "a sinner and a murderer," tried to settle the score, by ending her own life. Thankfully, she too got the help she needed, and went on to finish graduate school, and thrive in her career.

How can anyone in the United States support a political party that seeks to narrow -- rather than broaden -- the scope of caring for America's girls and women?, I wondered, constantly, throughout the evening.

I recently met with Aja in downtown Seattle, where she attends a small liberal arts high school, most noted for not having sports as its focus. Its motto: "Empower and Inspire all Students to Positively Impact Our World."

Aja, named by her father, after Steely Dan's 1977 best-selling album and romantic song of the same name, is the young woman in the room who isn't trying to draw attention to herself. But with her natural beauty, intellect and easy charm, she is captivating.

She had gone to Group Health with her mom, for a routine IUD. "They did a pregnancy test, and I found out I was pregnant," Aja said. "I immediately said I want an abortion. The nurse gave me a sheet of paper with a phone number to schedule the procedure. I walked out of the room, and just handed it to my mom, and kept walking. I heard her gasp, 'What?!' and for a moment I thought she disapproved."

When Aja returned home, Kieran, her boyfriend of two years, was waiting. They both decided it was the right decision. "But, I strongly believe that ultimately it is a woman's choice," she said.

That night, her mom came in her room, with a bag of candy, including Aja's favorite, Peachios. "It's okay, Aja," she said, gently.

"I'll be there to support you, too, even if you don't want me there," Kieran said. The morning of, he helped her to get ready.

Aja said she's "privileged" to live in a more liberal, accepting, part of the country, and that everyone's positive and loving support is what made all the difference in world. She realizes that that's not always the case for most women. Even when one nurse referenced "your baby," and another one rubbed her knee and said, "God bless you," she said it was okay. "In an ideal world, those things shouldn't be said," Aja said. "But young girls especially need to know that it's okay, and it's not wrong what they're doing."

To prove her point, she shared some of her research. "There's this strong belief among anti-choice people, that abortion is more dangerous than childbirth," she said. " That could not be more false," she continued. "The risk of death associated with childbirth is approximately 14 times higher than abortion. And the mortality related to induced abortion is 0.6 deaths per 100,000. Childbirth is way more dangerous, especially for young girls, than abortions!"

The next week, Aja was in her Humanities class, where they discuss social injustices.
"I raised my hand and said, 'Just so you know, I'm writing about my abortion for my senior project.' No one even looked up. I finally said louder, 'I HAD AN ABORTION!' That got their attention! Everyone clapped, then dead silence. I wanted people to talk, but no one said a word."

Next class meeting, she shared her disappointment. "At the very least," she said, "people should have acknowledged what I said, and asked, 'Do you want to talk about it?'" Since then, students have been sharing their own personal stories with her, and it hasn't stopped.

Revealing her decision to her dad, took a little more time.

"I wanted to tell him, but I was so nervous," she said. "Not because I thought he'd be mad, but because I have the 'stereotypical' daughter/dad relationship. I'm his only daughter, and the youngest."

The opportunity finally presented itself one evening. As the tension mounted as Aja walked slowly toward her parents' bedroom, her best friend kept it light and entertaining, with rapid-fire texts.

"What is he doing now?" she wrote.

Eventually, Aja just lay next to him, and recounted the whole story. "I said, 'Remember when I told you that I had complications with the IUD?' Well, that wasn't the truth, dad.' I found myself crying. Not because I was sad, but relieved. In the end, he held my hand, and said, 'I'll always support you, Aja.' And I knew he meant it."

Aja continues to be proud of her decision.

"I wanted to buy a T-shirt, along the lines of 'I had an abortion, and I'm in a better place because of it,' but most were anti abortion," she said. Examples easily found on the internet, are: "Abortion, Killing Children Legally Since 1973,""Abortion, Because it's Hard to Recruit Baby Murder Advocates," "I Survived Roe Vs. Wade, Roe Vs. Wade Will Not Survive Me," and, "Let God Plan Parenthood."

"The 'slut shaming' must stop," Aja said. She explains, "It's when a girl, majority girls, but it happens in the LGBTQ+ community as well [Definition: lesbian, gay, bisexual, transgender, queer/questioning+], is being shamed, abused (verbally and/or physically) because a girl is making a choice with and about her own body that is seen as sexual or provocative. It's shaming girls for making their own choices about their own bodies. And when men do those things, it's seen as the exact opposite. Men and boys are praised by their peers when they 'get some' in any form. It has become so woven into our society that girls very often slut-shame each other, too. The whole idea of slut shaming was completely made up to degrade women even more."

Aja's high school senior project -- with an emphasis on normalizing and destigmatizing abortion -- is due in May.

She plans to attend community college in the Fall, and pursue helping women. "There aren't any resources available that say it's okay to have an abortion, and that you're entitled to that choice," she said. "Women shouldn't be guilted into starting a family, when they're not ready for it. I want to help those women."

"What else would you like others to know about your experience?" I asked. "I'm a better person because of it," Aja said. "I know I want to be a mother. I can't wait to have a family of my own. Just not now. I first want to make a difference in this world."