Scientists with the United States Navy say they have successfully developed a way to convert seawater into jet fuel, calling it a potentially revolutionary advancement.

Researchers at the Naval Research Laboratory (NRL) developed technology to extract carbon dioxide from seawater while simultaneously producing hydrogen, and then converted the gasses into hydrocarbon liquid fuel. The system could potentially shave hours off the at-sea refueling process and eliminate time spent away from missions.

Currently, most of the Navy’s vessels rely entirely on oil-based fuel, with the exception of some aircraft carriers and submarines that use nuclear propulsion, reports the International Business Times. The ability to render fuel from seawater may change that.

"For us in the military, in the Navy, we have some pretty unusual and different kinds of challenges," Vice Admiral Philip Cullom told Agence-France Presse. "We don't necessarily go to a gas station to get our fuel. Our gas station comes to us in terms of an oiler, a replenishment ship. Developing a game-changing technology like this, seawater to fuel, really is something that reinvents a lot of the way we can do business when you think about logistics, readiness."

The carbon and hydrogen gasses produced from the seawater extraction process are converted to liquids using metal catalytic converters in a reactor system. That liquid product contains hydrocarbon molecules with carbon levels suitable for replacing petroleum jet fuel, the NRL noted in a press release. 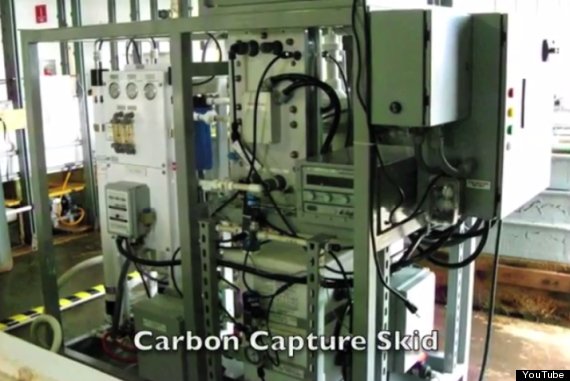 The carbon-capture system developed by the NRL

The Navy successfully used the new fuel-from-seawater process to power a radio-controlled scale-model replica of a World War II aircraft with an internal combustion engine.

"Basically, we've treated energy like air, something that's always there and that we don't worry about too much. But the reality is that we do have to worry about it," Cullom told AFP.

The NRL projects the new fueling system could be commercially viable in less than 10 years and could produce jet fuel that costs $3-6 dollars per gallon.

Forbes columnist Tim Worstall says the system could be great for the Navy, but he doubts it will be an economically feasible or energy-efficient alternative for those of us on land. "We need more energy to go into the process than we get out of it," he wrote of the Navy's method for converting seawater to fuel, adding later, "[A]s a general rule it’s not really all that useful. We want to produce energy, not just transform it with efficiency losses along the way."