Being a killer whale trainer at SeaWorld was once a dream job, befitting the sort of worldly blonde who lives in a dream house.

No more. Barbie seems to be voting with her plastic molded feet against keeping cetaceans in captivity.

Mattel announced last week that the company would no longer produce SeaWorld Trainer Barbie dolls, which came packaged with what Reuters describes, rather pointedly, as "a toy whale and a toy dolphin, which squirt water, and a tiny fish pool."

"I’d say it was always a bad idea to teach children that the best way to treat magnificent wild creatures is to capture them, house them in the equivalent of a bathtub, and force them to perform. It looks like Mattel finally agrees," Animal Legal Defense Fund attorney Carter Dillard said in an email. 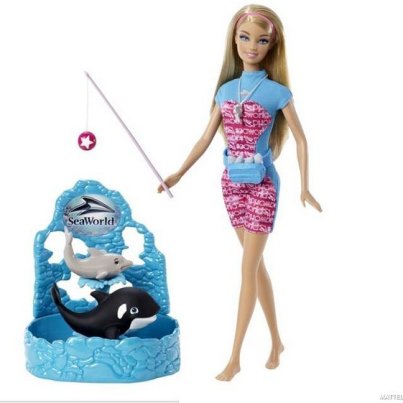 Mattel did not respond to HuffPost's request for comment on why it decided to stop producing SeaWorld Trainer Barbie.

"A number of factors go into a decision like that," spokesman Alex Clark told NBC News. "Their licensing deal expired and we've elected not to renew it."

SeaWorld has had a bad few years, both in terms of reputation and finances. The theme park has been under fire for how it treats its captive orcas and other animals in the wake of the documentary "Blackfish."

The company said in a statement that it is "disappointed in Mattel’s decision to stop production of the SeaWorld Trainer Barbie."

Despite Mattel's silence on why Barbie's quit her gig, SeaWorld said it is "particularly disappointing ... that the decision appears to be based on complaints from PETA, an extremist organization that works to close zoos and aquariums."

PETA and other advocacy groups like the Animal Welfare Institute cheered Mattel's announcement.

That doesn't mean the decision is only a bow to fringe concerns. Barbie historian Christopher Varaste said he sees Mattel's decision as a reflection of current mainstream sensibilities.

"The Barbie brand has had a long, positive relationship to the animal kingdom," he said. "Whether the doll was released as a pet doctor or a paleontologist, essentially she remained something of an activist: a reminder to children that our animal friends need our protection. In that regard, it makes sense that Barbie was not the right fit for SeaWorld."

Varaste also noted that controversy sometimes, but doesn't always, result in a doll being canned.

"A line of Kardashian dolls were shelved after a vocal outcry from parents deeming the dolls offensive and highly inappropriate for children," he said. "Other dolls that have caused a stir -- but weren't canned -- include Tattoo Barbie, for the obvious reasons."

Naomi Rose, a marine mammal scientists with the Animal Welfare Institute, said in an email that she hopes Barbie's departure will put pressure on SeaWorld to make some changes.

"When an iconic toy no longer sees an advantage to being linked with an iconic theme park, that theme park needs to reconsider its business model," she said.