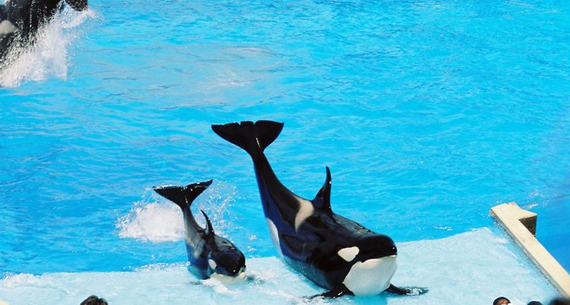 -- And Tries to Take Credit for the Idea

In a surprise move, SeaWorld has announced that it is ending orca breeding at all of its marine parks. This is a tremendous step forward in orca safety and welfare. For years, SeaWorld has used artificial insemination to produce more orcas, also known as killer whales, for its amusement parks, forcing the resulting offspring into monotonous, unnatural, lifelong confinement in barren concrete tanks. SeaWorld's orca breeding program, which produced a number of inbred orcas and orca hybrids that would never exist in nature, has finally come to an end. My husband, Ric O' Barry, has been fighting for more than four decades to bring attention to the plight of the orcas and other dolphins at SeaWorld, and on March 17, we could finally celebrate a victory: Thanks to SeaWorld's move to stop breeding orcas, the company's current generation of 29 orcas will be its last.

SeaWorld's decision is the result of the public's growing opposition to confining these intelligent, social and powerful predators in small tanks, where they must perform tricks for dead fish. The public's change in view on orca detention is due in large part to Gabriela Cowperthwaite's award-winning documentary Blackfish. Released in 2013, Blackfish reveals the dark side of orca captivity, including the shockingly violent methods that were used to capture orcas for SeaWorld's theme parks. Blackfish was followed in 2015 by John Hargrove's compelling written account of the inhumane breeding practices that he witnessed during his 12 years of working as a killer whale trainer at SeaWorld. In his book Beneath the Surface, Hargrove describes SeaWorld's female killer whales being bred far too young and too frequently. He also highlights the devastating consequences of SeaWorld's practice of separating offspring from their mothers.

SeaWorld's decision to stop its orca breeding program is an attempt to regain the public's trust and boost flagging ticket sales. SeaWorld's ticket sales have declined in recent years, and visitation at SeaWorld San Diego, according to information posted online, dropped 17 percent in 2014 and a further 4 percent in 2015. During a webcast with the public, Joel Manby, SeaWorld's president and the CEO of the Orlando-based company, states, "We are an organization that needs to have cash flow to [succeed] and unfortunately, the trends were not in our favor." He went on to say, "We changed because society's mindset was changing. The truth was our customer base was shrinking and more and more people distrusted us."

SeaWorld's decision to stop the breeding of orcas is not about saving the orcas. It is about saving SeaWorld. According to Manby, "The data showed, and trends showed, it was a SeaWorld without whales or it would probably be a world without SeaWorld." And SeaWorld's new business strategy seems to be paying off. Since the company announced an end to orca breeding, SeaWorld's stock has soared. As reported by an article posted on MarketWatch.com, "SeaWorld Entertainment Inc.'s stock had its biggest one-day percentage gain in its history Thursday, after the company announced that it would stop breeding killer whales at its theme parks as of Thursday."

Even though the decision to end captive breeding of orcas is a much-needed step in the right direction, the way that SeaWorld has presented its decision to the public and the media has been disingenuous. SeaWorld is bowing to consumer pressure to survive. This pressure is the result of tireless efforts of dolphin-freedom advocates around the world. It has taken powerful documentaries, books, interviews and decades of public outreach, campaigning and protesting to reach this goal -- and now SeaWorld wants to take credit for it. On its website, seaworldcares.com, SeaWorld tells its fans: "We're changing because attitudes about animals under human care have evolved and we need to evolve with them. And make no mistake: we have all played a big part in why society has evolved on this issue."

If SeaWorld recognizes the absurdity of its claim, it is not apparent. SeaWorld boldly claims that it is a significant part of the reason why society has reached the conclusion that orcas do not thrive in human hands. SeaWorld is not likely to admit that the protesters were right all along, that orcas never should have been taken from the wild, made to perform for their food and forcibly bred in punishingly small tanks. SeaWorld wants to pretend that was how the public has gained a better understanding of orcas. In reality, SeaWorld has spent decades giving paying audiences a distorted view of orcas, presenting them as pets and show dogs. The millions of spectators who have bought tickets to sit in the bleachers of SeaWorld's Shamu Stadiums, cheering loudly and applauding at the performing orcas, did not change their minds sitting in those stadiums. It was the people working hard outside SeaWorld while the show was going on, holding up homemade banners, making documentaries, writing books or blogs, who contributed to that change.

Over the years, protesters and dolphin-freedom advocates have reached millions of people with the message not to buy a ticket to SeaWorld, and SeaWorld has fought us with everything it has. It has tried to convince the public that my husband was all wrong, the protestors were wrong, Blackfish was wrong, and Hargrove was wrong. "We are doing a good thing here, and our killer whales are thriving," has always been SeaWorld's message to the public. While animal advocates worked overtime to educate the consumers to the many reasons why orcas do not thrive in concrete tanks, SeaWorld did all it could to convince the public that orcas perform because they like it and thrive in tanks. SeaWorld has worked fiercely against the anti-captivity movement until it could no longer fight the public's mounting concern for the welfare of captive orcas. SeaWorld was grudgingly forced to give in to the public's evolving understanding of an orca's basic need to swim freely in the ocean. Boycotting SeaWorld has been the consumers' way of saying that the way SeaWorld treats its orcas is unacceptable.

This dramatic change in society has taken place in spite of SeaWorld's best efforts, not because of them. Ironically, despite SeaWorld's insistence that it has been educating the public to the true nature of orcas, it is the other way around: The public has educated SeaWorld and the lesson was that these powerful animals should be free.