SeaWorld just announced that they would no longer let their orcas -- also known as killer whales -- breed. I asked several killer whale and animal behavior experts for their opinions.

Barbara J. King, whose books include How Animals Grieve, wrote:

Killer whales and other cetaceans suffer so much in captivity, both physically and emotionally, that they shouldn't be held at all--full stop... While cessation of breeding captive killer whales is a positive step, it wouldn't address the profoundly distressed and depressed behaviors of killer whales who live now at SeaWorld. Each of these individuals has thoughts and feelings about his or her captivity, and we can't turn away from these. 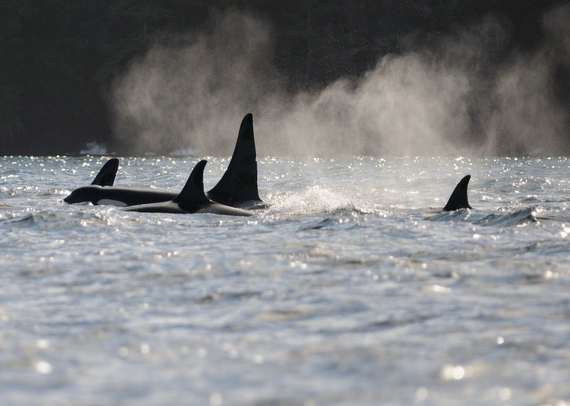 Caption: Tall-finned male L-41, with female L-22 at his left side and two other L-pod members traveling Haro Strait. When this photo was taken in 2013, he was 36 years old; she was 42. Credit: Carl Safina

Kenneth Balcomb has studied the free-living orcas of the Pacific Northwest for four decades. I got to know him -- and some of the whales in the waters off Washington State -- while researching my book Beyond Words. He'd explained to me that so many young females had been captured in the 1970s that their loss continued to depress current reproduction numbers of the free-living families.

Referring to captive breeding as, "abominable artificial propagation for human entertainment," Ken continued, "There never was any species survival or utilitarian purpose for their breeding program, though the former was sometimes touted and the latter fancied." He considers orca captivity, "a circus that is no longer popular."

On the positive side, Ken believes that SeaWorld's cessation of breeding will mean, "increasing respect for another very sentient species on this planet that has been here much longer than we have, and from which we have much to learn." Ken clearly admires the whales he's come to know. "They have very efficient societies enduring for millennia," he says, "whereas we are rather clumsy and change social paradigms ad hoc... We annihilate and subjugate other life and other humans, and devour resources as if our own agendas are all that matter." Ken's definition of progress is a big one: "Moving toward respect for a natural world that sustains all life."

Lori Marino is a neurobiologist who has studied dolphin behavior and dolphin brains and written about the nature of intelligence. She is now executive director of The Kimmela Center for Animal Advocacy. Lori says that not breeding orcas, "would be progress... because it might signal a change in our relationship to these animals." Dr. Marino believes that by ending their breeding program, SeaWorld gives itself, "an opportunity to be an authentic educational center, which is what they falsely claim they are now." But she does not see ending breeding as the end of the process. "

Ultimately, SeaWorld and the captivity industry should end the heinous practice of confining these and other cetaceans for profit," she says, "and place the remaining individuals in ocean sanctuaries where they can be given back some of the life that was taken from them."

Marc Bekoff, who is affiliated with the University of Colorado's Ecology and Evolutionary Biology department and whose many books include, Rewilding Our Hearts: Building Pathways of Compassion and Coexistence, has thoughts to share, too. He thinks that by ending breeding, "the public will be educated about how wrong it is," both to breed orcas, "and to treat the whales as mere objects for human entertainment."

In Marc's opinion, "It could make a big difference for the quality of lives of captives whales," who, "would no longer be used as breeding machines." In his piece on the SeaWorld announcement for Psychology Today, Marc wrote: "This is a very good beginning, and I look forward to the day when venues like SeaWorld... morph into sanctuaries in which the animals' lives are put first and foremost and captive breeding... and human entertainment go out the door totally."

A dissenting view came from a SeaWorld employee who worried that ending the breeding would deprive the killer whales of one of their main joys in life: the fun they have with their babies.

As for me, I share all these views, and I also see the goal as an end to captivity for orcas. All the attention today is on SeaWorld for their announcement of progress on this issue. But let's not forget the plight of Lolita, who is not owned by SeaWorld and is one of the last remaining free-born captives in the U.S.

Lolita is living out her lonely existence in sub-standard solitary confinement in Florida at the Miami Seaquarium. Her particular situation is the lowest-hanging fruit in improving humane treatment for captive orcas.