Among Steve Job's top 10 favorite books, there is only one business book on innovation. It is by Clayton Christensen. All this happened for Clayton in his 40's/50's! Here is his story.

Genesis of the Second Career

Clayton Christensen turned 40. He had a wonderful family - his wife, five kids and a regular comfortable job. He had an urge. He wanted to be a teacher. In his words, "If I am ever going to do it, I better start." In consultation with his wife, he quit his job and plunged into a doctoral (Ph. D.) program. In his second career, he became an academic.

Fast forward to his late 40's, he co-authored his first book "Innovator's Dilemma" - pioneering the "theory of disruptive innovation." This book not only influenced Steve Jobs and many others but also got Clayton a meeting with then CEO of Intel, Andrew Grove.

"Explain your theory in few words"

As the story goes, when Clayton flew down to meet with Andy and had a seat across him. Andy said, "You have 10 minutes to explain what your theory means to Intel." Andy is known as a gruff man with a sense of urgency. Clayton tactfully explained the process of disruption in a totally different industry - steel. In the steel industry, mini steel mills entered the rebar market (reinforcing steel, it is the down market for steel) before going upmarket and challenging the bigger players. Andy quickly seized the implication - what down market entrants could potentially mean to Intel in the long term.

Seems intuitive - why would Steve and others be deeply influenced by this theory?

When you hear the word theory, the first thing is an image of something abstract and academic, farther away from the real world of practitioners. Clayton's theory can fit into many of the stereotypes. Yet, it does two interesting things. One, it makes it easier to explain and rationalize under one umbrella how Toyota was successful in usurping Detroit, how personal computers dominated IBM's Mainframes and many more. His theory neatly fit disparate parts of history into one frame like phone and computer into a smart phone!
Two, it does something that is unlike many theories , something I personally like. Before I add my 2 cents, a picture is a thousand words. Here is a graph that summarizes the message aptly. 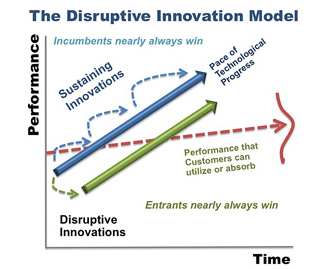 Blue line could be the IBM and the Detroit companies of the world. Green could be Apple and Toyota's of the world which entered the market with less stellar technology but wider audience reach. What I like the most about this graph is the red line - the view-point of the customer.

I chuckled when I saw the slope of the red line. Indeed, we humans are gradual change agents and definitely slower than the pace of technology changes. Our habits change slowly, if at all. Our spouses would wholeheartedly agree!

More than the how and why of a theory, the framework or the outline of a theory (like the graph above) provides a simple structure of the world around. It helps me connect the dots between seemingly different things from the past and helps extrapolate into the future. Clayton's theory is a notch above in that, it not only explains the past in simplified ways but it also accounts for the customer's viewpoint!


The world is abound with numerous inspirational stories - college dropout to billionaire, success against physical adversity etc.Clayton's story is something different - it is a mid life career change success built on the pursuit of passionate dream when the opportunity cost of leaving a comfortable job was high.

The predicament could be a mirror in many homes! Inspiration can come from many quarters, need not be a flamboyant influencer, it could even be a scholarly academic, 6 ft 8 inches with well groomed hair and as geeky as they come. The twist - Steve Jobs, Mark Cuban, Malcolm Gladwell, Evan Williams and others are beneficiaries of his second innings.

While inspiration can come from numerous places - when your passion intersects with opportunity, the magic happens. Your second innings or nth innings, it does not matter - age is just a bystander.