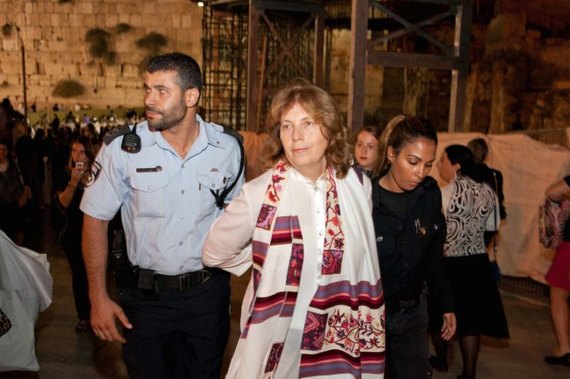 Photo via Creative Commons, attribution: Women of the Wall.

It seems like every few weeks another young, female celebrity proudly and publicly declares she is not a feminist: Shailene Woodley. Katy Perry. Kelly Clarkson. Kendall Jenner. These women often justify their refusal to claim feminism by explaining they do not hate men--speaking to the most intractable and yawn-worthy of the mischaracterizations of feminism--or by insisting they do not personally face inequality.

Nevermind that compelling movie roles for women dry up decades before those for men, or that recently 37-year-old Maggie Gyllenhaal was deemed "too old" to play the love interest of a 55-year-old man. (Thank you, Amy Schumer, for the Last F**kable Day Skit!). Even if we accept these young stars' claims that they don't face any discrimination, feminists wonder where the concern is for other, less privileged women.

This question is both frustrating and justifiable. On the one hand, who cares what a reality television star thinks of feminism? On the other, these women tremendous power to influence young women. For them to dismissively say, "I have rights, so who needs feminism," both dishonors the sacrifices of our foremothers and ignores the reality that women's rights are still in play.

And they are still in play for women of faith.

Gender continues to be a serious issue in patriarchal religious traditions, and women continue to be denied particular roles because of their genitalia and/or gender expression. However, while mainstream feminists practically beg young celebrities to adopt the "feminist" label, women of faith are mocked for actually claiming a feminist identity and working within our traditions to combat sexism. While mainstream feminism seems desperate to have in its fold a 19-year-old reality television star who is famous in no small part because her older sister's sex tape went viral, mainstream feminism rejects empowered women of faith.

So why have we become second-class feminists?

We understand the appearance of a disconnect between our faith and our feminism. We acknowledge that our religious traditions suffer from sexist interpretations. We understand why some feminists leave our faiths, and we have been tempted to do the same. But even if every Jewish, Christian and Muslim feminist abandoned her tradition, there would still be many women who stay, women for whom that decision has religious jurisprudential consequences. They will still be subject to Halakhah, Canon law and fatwas. They will still face exclusion from leadership roles. They will still endure pressure from community members who accept women's lesser status based on the teachings of unenlightened rabbis, priests, and imams.

We acknowledge and concern ourselves with these real world impacts of our faiths. But we also recognize our faiths' foundational messages for what they are and the ways they've been misconstrued. In other words, we refuse to let our traditions be defined by sexist interpretations.

This refusal takes many forms. Jewish, Christian, and Muslim feminist scholars are working within the framework of existing translations of the Torah, Bible, and Qur'an, producing new translations of those texts, and, in some cases, questioning the authenticity and divinity of verses that appear irredeemably sexist. At the same time, female activists are committing radical acts of worship that address longstanding sexism. Anat Hoffman was arrested and strip searched for her activism seeking legal recognition for Jewish women to pray out loud with traditionally male religious garb at the Western Wall in Jerusalem. Kate Kelly was excommunicated after founding the movement Ordain Women and calling for women to take on leadership roles within the Mormon Church. Amina Wadud endured international condemnations and threats of violence when she became the first woman to lead a mixed-gender Muslim prayer in the U.S.

And yet, while mainstream feminists pine for young stars to pay lip service to feminism, women of faith who are actually doing brave and difficult work are routinely told they cannot be "true" feminists.

We recognize that many people think it is only a feminist act to leave patriarchal traditions. We contend that it can also be a feminist act to stay, and we look forward to the day when doing so puts neither our faith nor our feminism in question.
___

This piece was co-authored by Jennifer Zobair, Gina-Messina-Dysert, and Amy Levin, who are co-editors of Faithfully Feminist: Jewish, Christian, and Muslim Feminists on Why We Stay.