Marriage isn't for everyone, and apparently, that's especially true for people who've already walked down the aisle once before.

Late last week, USA Today published new analysis of federal data that showed that the remarriage rate in the U.S. has dropped 40 percent over the past 20 years. Researchers at Bowling Green State University found that just 29 of every 1,000 divorced or widowed Americans remarried in 2011, down from 50 per 1,000 in 1990.

The researchers suggested that the rising number of couples opting for cohabitation may be a factor in the declining remarriage rates.

We were curious to know how our divorced readers felt about remarriage in light of the study: Would they ever remarry? And if they had remarried, what went into their decision to take the leap?

Click through the slideshow to see what they had to say, then head to the comments and let us know how you feel about remarriage.

PHOTO GALLERY
Will You Remarry?

Second Marriages: Readers Reveal How They Really Feel About Remarriage
Will You Remarry? 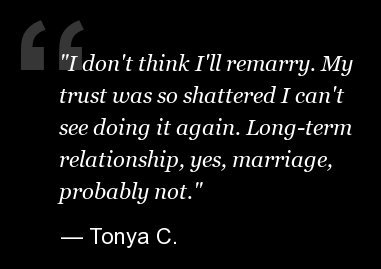